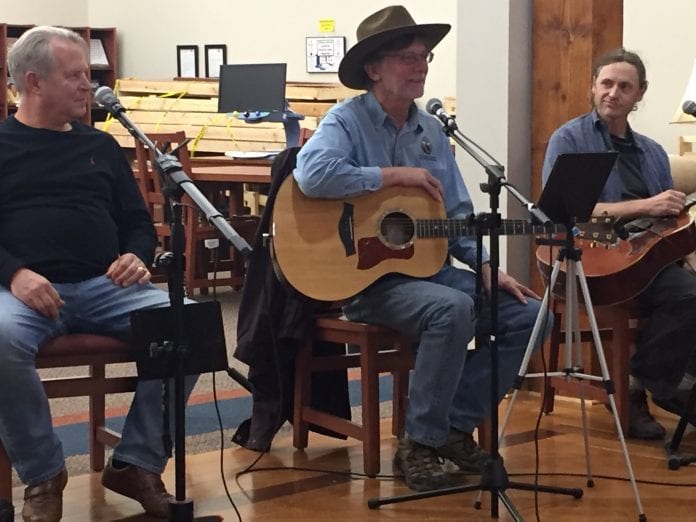 The Macon County Public Library Living Room, complete with roaring fire, hosted Songwriters in the Round Nov. 17. Attendees were treated to refreshments and a free musical event showcasing original songs by Gary Allen, Scott Crowley, Dave Stewart, and Brian Sanders. Stewart, brainchild of Songwriters in the Round, performed his own songs as well as collaborated with Robert Shook, a poet as well as the curator of the Macon County Historical Museum.

Stewart, a musician since age 10, decided more than a year ago to organize a public event every two months to spotlight three to five songwriters. Although each songwriter event has taken place at various venues throughout Macon County, Stewart said the library is an ideal location. The two-hour event takes place in the large open, vaulted ceiling central “living room” area, which has plenty of space for musicians, a sound person, and the audience.

Up to 80 people have attended past songwriter showcase events. Approximately 27 interested songwriters are involved in Stewart’s endeavor; he asks different ones each event to share the “stage” and speak with the audience about inspiration for four or five original songs. “It’s become a community of songwriters,” said Stewart, who explained that there are also occasional workshops planned so that songwriters can “become better” at their craft.

Last Saturday, Sanders started the rounder with “Dream within a Dream.” Following him was Stewart. Throughout the evening, Stewart sang four of Shook’s poems/turned songs: “Carolina Mountain Home,” Too Far From Texas,” “Unwanted,” and “Miracle in the Manager.” “Carolina Mountain Home” was a reminiscence of Franklin’s downtown 50 years ago.

“I’ve known Dave for a while,” said Shook. “I’ve written about 100 poems and we were talking one day and we decided to collaborate.” He explained that all his poetry is inspired by events, memories, etc. “The best ones come fast. I can write them in a few minutes.”

Before playing “Unwanted,” Shook conveyed to the audience that the poem was written after he took a friend to the VA hospital and wondered about the lives of the World War II veterans who waited. “This one’s a tear jerker,” said Stewart during the song’s introduction. He played a dramatic guitar solo before launching into lyrics crafted from Shook’s poem.

Music styles ranged from folk to soulful to blues to easy listening. Three of the four performed original Christmas-themed songs as well. Crowley, Stewart, and Sanders played guitar while Allen played keyboard. As a musician, Stewart, former owner of Wired, plays in several bands and is available for events as a solo artist or with his bands; Allen has played professionally for various venues and on cruise ships; Sanders performs locally; and, Crowley plays guitar, bass, and is a classically trained pianist.

CDs of Stewart’s first album were also for sale during Songwriters in the Round. The next event takes place in January. For more information, visit davestewartsongs.com.