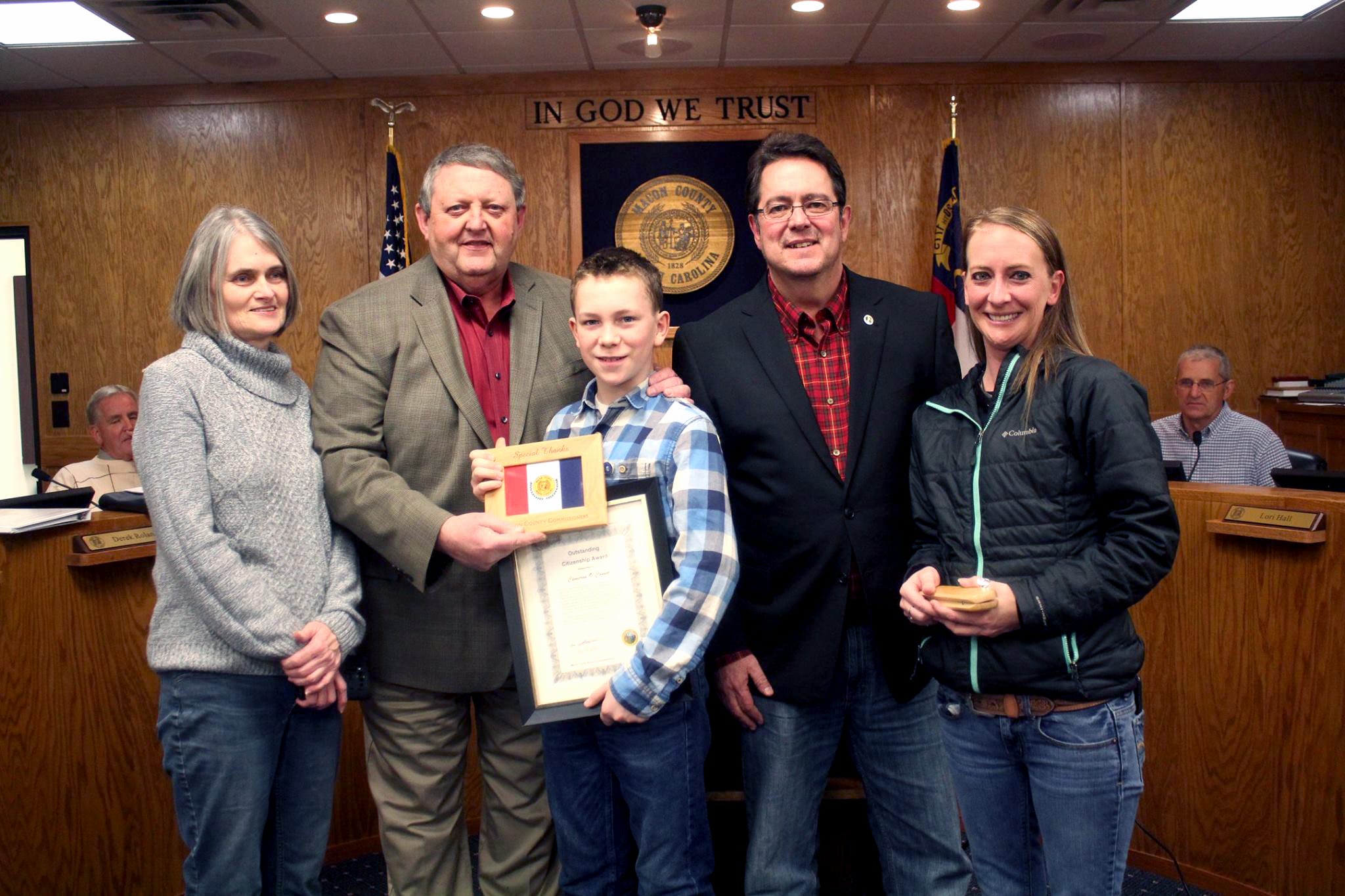 There are moments in our lives that define us; split second decisions that shape our character.

One Macon County youth was recognized Tuesday night for a random act of kindness that he never gave a second thought to, yet continues to have a lasting impression on the community.

On Feb. 2, shortly after 13-year-old Cameron O’Connor got off of the school bus, he noticed an 89-year-old neighbor who had fallen and was in need of help. Cameron instantly reacted and remained calm while helping the lady. Cameron called 911 and remained calm while he waited with his neighbor until help arrived. Cameron did his best to comfort the woman until she was transported to the hospital.
“This young man deserves to be recognized because in reality many would have just went and called for help and that’s if they even noticed her down on the ground,” said Macon County Sheriff Robert Holland. “During a time of need, Cameron stepped up and went to help a perfect stranger and did his part to make sure she got the help she needed and all while attempting to comfort her.”
The Macon County Board of Commissioners presented Cameron with a Citizenship award for his act of kindness and thanked him for his bravery.

“I am sure it couldn’t have been easy to find someone in need the way you did,” said Macon County Commission Chair Kevin Corbin. “But the fact that you never hesitated and thought quickly to help someone speaks volumes about what a fine young man you are. We are grateful to have people like you growing up here in Macon County.”
Commissioner Ronnie Beale also presented Cameron with an engraved pen from commissioners as well as the Macon County flag.
“We also need to recognize and thank Cameron’s family, both his mother and grandmother who are here, because acts like this aren’t done without people who love you, teaching you right from wrong,” said Beale.

After the incident, Cameron received a phone call from Macon County Sheriff’s Local teen commended for ‘random act of kindness’

Deputy Blake Buchanan who wanted to personally thank Cameron for his quick actions.
“I want to thank the officer who personally drove to our house and shook his [Cameron’s] hand and thanked him,” Jennifer wrote on Facebook.
“I wanted to make it a point to let Cameron know that what he did that day was no ordinary thing,” said Deputy Buchanan. “It would have been easier for him to keep walking, but he didn’t. He went out of his way to help someone who desperately needed it and I am so proud of him and he deserved to know that what he did was impressive.”

Sheriff Holland commended Deputy Buchanan following the incident and ensuring that Cameron understood the gravity of his actions.

“As far as Deputy Buchanan goes, He’s a great example of what an officer should be,” said Sheriff Holland. “Deputy Buchanan didn’t have to go find that boy simply to shake his hand and thank him for his service… He did it because that is the kind of officer he is, professional and compassionate.”

After being recognized by the county, Sheriff Holland and Deputy Buchanan treated Cameron to dinner.
“We wanted to make sure that Cameron understood the magnitude of what he did,” said Buchanan. “Today, unfortunately, our culture has become one in which serving others is now what is out of the ordinary. When faced with the opportunity to go outside of their comfort zone and help someone in need, most people nowadays just turn their cheek. Cameron didn’t do that. He rose to the occasion and he did what was right. He made a difference in someone’s life. But not only did he make a difference in that lady’s life, he made a difference in mine. Cameron reminded me what wearing this uniform is about.”

Art to the Rescue! raises funds for AARC

Macon spends more per person on library than surrounding counties