The Macon County News letters page is a public forum open to a wide variety of  opinions. Letters are neither accepted nor rejected on the basis of the opinions expressed. Writers are asked to refrain from personal attacks against individuals or businesses. Letters are not necessarily reflective of the opinions of the publisher, editor or staff of The Macon County News. Email letters to maconcountynews@ gmail.com.

Given the irrefutable evidence of Russian interference in the 2016 election, the Senate’s refusal to pass much-needed election security funding measures is simply unacceptable.

The House of Representatives recently passed a bill (HR3351) that would allocate $600 million in election security funding for states to replace digital-only voting equipment with a system that relies on voter-verified paper ballots. Creating a paper trail during an election is one of the most effective ways to prevent cyber attacks from influencing vote counts – and there is an urgent need to prevent against that possibility.

I’m asking my senators to take a cue from the House and push for $600 million in election security funding for states. Lawmakers are duty-bound to keep our democracy safe, and the American people are counting on them to do the right thing.

Trump part of a fascist plot to take over America

When Donald Trump first went into office I believed that he was failing to establish a bi-partisan congressional commission to investigate Russian interference in the 2016 election. I realize now that I was wrong. He was not failing; he was refusing! Thinking patriots have to ask themselves, why does Trump refuse to carry out that task on behalf of American citizens?

Trump is knowingly or unknowingly a part of a fascist plot to take control of America. Whatever you have that you fail/refuse to defend you will soon lose to someone who wants it. Nikita Kruschchev said he would take America without firing a shot. Has that boast become our reality and nightmare?

Read Peter Gentling’s August 1, 2019, letter in the Asheville Citizen-Times.  He states, “Our country no longer belongs to the people.”

Read “The Plot to Seize the White House” by Jules Archer. Archer shows how a plot to establish a fascist government was foiled in 1933, primarily by Ex-Marine Major General Smedley Darlington Butler. As you read that true story you will think you are reading about 2016-2019.

Which do you prefer – democracy or fascism?

Restore one man, one vote and end gerrymandering

Joel Joseph (a civil rights attorney) writes extensively about the Supreme Court and is the author of “Black Mondays: Worst Decisions of the Supreme Court,” which has a forward by Justice Thurgood Marshall.

I’m sure Joseph would agree that the high court did us no favors when it recently ruled that it would not decide whether gerrymandering was constitutional or not, leaving it to the states to decide.

Joseph accurately concludes “this ruling is contrary to more than 200 years of American jurisprudence.”  In the ruling of Marbury v. Madison (1803), the Supreme Court ruled it had a duty to say what the law is and to rule on constitutional issues.  The court has since reaffirmed this principle, applying it to elections and (importantly) the rights of voters (you and me) to be counted equally.

As I have before written, gerrymandering is the deliberate manipulation of district boundaries to give a disproportional advantage to a political party or racial group.  The term was first used in 1812, when Elbridge Gerry (then Governor of Massachusetts) persuaded the state legislature to create a district to favor a fellow Republican (an endeavor those of us born in the Commonwealth of Massachusetts are not especially proud).  An outraged Federalist newspaper (The Boston Gazette) observed that the misshapen district resembled a salamander and the moniker, “gerrymander,” stuck.

The present Supreme Court (The Trump Court) has failed in its duty to the American voter so our only hope is, individual state Supreme Courts (free to rule that gerrymandering violates their state’s constitutions, will rule with more wisdom and impartiality.

In 2018, the Pennsylvania Supreme Court redrew the map of the state’s congressional districts, overturning a Republican gerrymandering scheme used in the past three congressional elections (League of Women Voters v. the Commonwealth of Pennsylvania).

The Pennsylvania Supreme Court correctly and succinctly ruled, “It is a core principle of our republican (small r) form of government that the voters should choose their representatives, not the other way around.”   This one simple sentence seems well beyond the intellectual grasp of the Trump Court to appreciate or comprehend.

Hopefully, other states (North Carolina among them) will follow Pennsylvania’s well-reasoned example and restore the principle of one man, one vote and end gerrymandering once and for all.

However, as long as North Carolinians continue to elect men like Mark Meadows, Richard Burr, and Thom Tillis to public office, I will not hold my breath. In their misguided effort to please this president I expect them to hold to the one single guiding principle, the standard by which such men live and prosper (that integrity, honor and fairness is for chumps).  The status quo therefore, will continue; as will North Carolina as a permanent  gerrymandered state.

We must consider all the possibilities

Some people see flowers, others see visions, some hear music, others hear God, some feel the drum beat, others feel earth moving through space. Carter by a New York River seen a UFO, I was there, said “no opinion,” thus not reported. Other people seen the same event from a different locale, those accounts were published. We must consider all the possibilities, probabilities, and say it is wisest for world security human safety, to come to “no opinion” so you can go home and sleep in peace.

Biased political opinion editorial writers lack knowledge of events causing bad judgement. It is a blessing for all that they never attained intelligence work.

Congress shares the blame for conditions at border

President Trump wants immigration laws passed and the border secured. Congress has not done its job and passed laws to fix the immigration system or secure the border. Therefore we have the crisis that exists today.

The influx of illegal migrants and illegal migrants with children has strained the system. We do not have facilities to accommodate them. The facilities we have were built for processing center not detention center. They are overcrowded and do not have enough personnel or supplies for the situation. Therefore the children and migrants cannot receive adequate care and the supplies are not sufficient for them. Democrats, the Left and the media are making it sound like the conditions are worse than the existing conditions. Democrats are resisting passing immigration laws and securing the border. They bear a lot of the blame for the conditions at the facilities that exist today.

The migrants need to be processed to know if there are criminals, MS-13 or sex-traffickers among them, and we need to know if they qualify for asylum. We do not need those migrants accessing the population of our country.

We cannot process them in an orderly way because of the existing influx of migrants. If they came in legally, they could be processed without the conditions that exist today and there would be no need to separate the children from their parents.

You are what you surround yourself with

Every word, every wrongdoing, every current situation this poor soul justifies without realizing that you are what you surround yourself with.

You claim that any country “would be proud to have Donald Trump as their president.” May I ask where you have been recently? I can assure you every place I have traveled, not one person I have encountered has expressed that … not one.

The “takeover” and “hate-filled speech” comes from one place and one place only … your president. I urge you to step away from your computer (or typewriter) and go out into the world and speak with real people, not those you meet on Fox. I trust you will be very surprised that no one supports the Communism or Socialism you describe; you are the one being dragged into the cesspool. No one is “coming for you” sir; lol so feel free to step out into the real world. The color and diversity is beautiful.

By the way, considering that Jesus was born in the Middle East you do realize that his skin may have been different color than your, his language and heritage different from yours, and even if you did not allow him to cross the border because of that .. he still would have loved you with open arms, open mind and open heart.

Terrible shootings are not racially motivated

You know in all my 89 years I can’t remember ever hearing so much disrespect of a president in our great country. All the hullabaloo about race is disgusting. The two terrible shootings are a disgrace and is not racially motivated. It was done by a nut who we should have stopped before he got loose. Here’s my beef, terrible as it is, hundreds are killed in Chicago and Baltimore and many other cities every weekend. There were 90 killed in Florida.

Let’s stop all the name calling and demand our politicians get off their bottom, oh, I guess that’s where their brains are stored beause it’s not in their heads. So, call them raise hell with them, let’s get something done. Remember guns don’t pull the trigger, it’s some mentally ill person.

More than a roundabout

Too often, the N.C. Department of Transportation neglects to seek local public local input on a project, or else, if they do, they ignore it in whole or in part. Such was the  case with the many roundabouts now being contructed in Franklin. Was traffic a problem at any of these intersections? Was it necessary to destroy the beautiful gateway into town by leveling the grand oaks that had welcomed residents and visitors for 170 years? No matter how you feel, it is now under way. 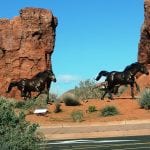 At this point, what can be changed? We see the DOT sticking to their “standard” of simply pouring concrete into new bridges and roundabouts. Is this necessary when other states have the imagination and creativity to include historical and cultural heritage on sites such as these?

I’ve been an engineer most of my working life and I’m well aware of the advantages of roundabouts. However, if the DOT would work with the town of Franklin, many possibilities for visually improving these could be incorporated, from Cherokee history, Women’s trail history, Franklin history and more.

Letters to the Editor for May 26