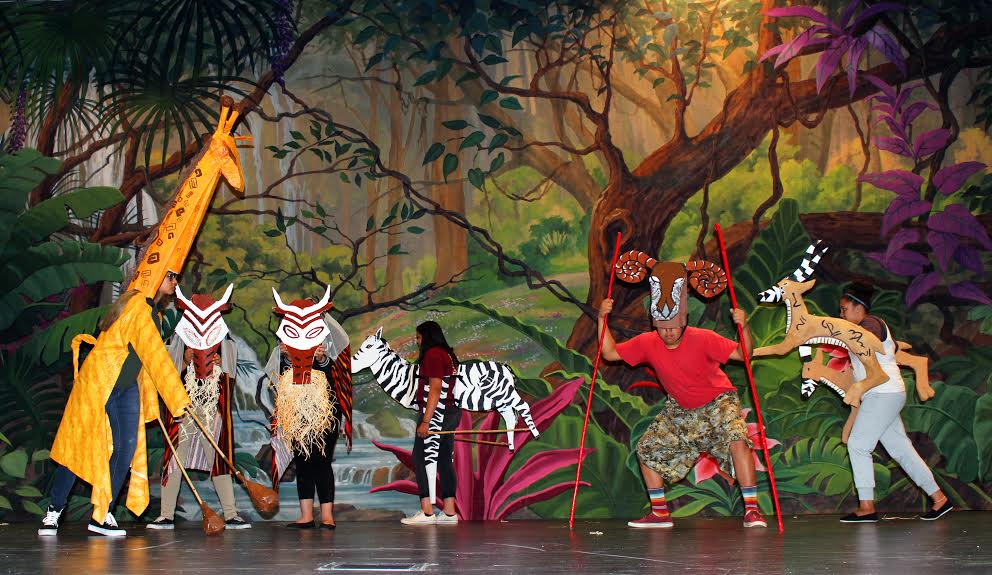 Students at Cherokee Central Schools have been working for months to transform themselves for the school system’s first ever production of the Lion King. Through the leadership of Michael Yannette, Director of Choirs for Cherokee Central Schools, the district was able to secure a grant to make the dream of the production a reality for the students.

“We applied for the grant in August 2015 after hearing that the grant was available for the Lion King, Jr.’s inaugural year,” said Yannette. “Disney has never released it before because the full version is still doing so well on Broadway. We received notice that we got the grant a month later and we were thrilled. The grant covered all of the script materials, music, and the rights to produce it at our school for free.”

Superintendent Scott Penland, along with the school board and Principals, Deb Foerst of the high school and Cance Carnes at the middle school, stepped up to support the endeavor fully.

“They have wanted something like this since the inception of the 50 + year old school,” said Yannette. “We have been very lucky. I really have never seen anything like it in 30 years of teaching. Cherokee School Board members actually come up and introduce themselves and invite me to come to meetings if the program or the students need help in any way. Cherokee has been an amazing place to teach.”

There are about 42 students total that are making the production happen. Twenty-six students will take the stage in the performance and another 20 student artists who have worked on creating most of the puppetry that occurs in numbers like the Circle of Life.

“The students have been led by the incomparable Megan Barnes, Art teacher extraordinaire,” said Yannette. “The designs they have created are really stunning!” Barnes lives in Macon County.

Yannette and staff started rehearsals in January, which is when they also started production on the sets, costuming, props and puppetry. Students have dedicated their time and talents for the last three months to the production while maintaining their regular classes and after school activities. Seventy percent of the students performing in The Lion King are also athletes for Cherokee Central Schools.

“Performance art of any kind is a remarkably valuable tool which leads to a successful life,” said Yannette. “I know nothing that enables students to create on so many levels – acting, singing, dancing, drawing, set building etc. – and enables them to gain such a deep confidence in themselves. Theater changes lives and the fact that Cherokee has the most remarkable high school theater I have ever seen and yet the community has never had the opportunity to experience such a tremendous show as The Lion King produced by their own community  means that many very talented students will now have the opportunity to develop that talent, express it and share with the rest of the community. For some very talented students, it means that new career doors have opened that they may have never considered. It’s a very exciting time to be a Cherokee Brave.”

“We kept tickets very inexpensive at $5 because we really want the whole community, and surrounding towns, to be able to see the show,” said Yannette. “We also have a pre-show fundraising dinner which is served all three nights from 5:30 p.m. until showtime. Tickets for the dinner are $7 and will be a choice between chicken croquets and mashed potatoes or twice baked pasta. All meals include salad, dessert and a drink.”