The 4H club’s summer relief program offers many adventures and learning experiences for children in Macon County through a variety of summer activities. Of the 18 classes offered, several stand out with children as their “favorite” activities.

During the month of June children signed up for the “Explore Our County” Trip. This was a two-day excursion in which children were able to tour the courthouse, waste management and water plants,  visit with Emergency Services, the fire station, and the jail, via a ride on the Macon County Transit Bus.  The kids learned about how taxes are spent and how  “millage” rates affect homeowners tax rates. Tamara Tally, Extension Agent, 4H Youth Development, quizzed the children about what they had learned and they all agreed it was a great learning experience and also a fun activity.

A stitch in time

A beginning Sewing Class was also held at the 4-H facility on Thomas Heights Road. Children were able to learn how to operate a sewing machine and then craft their own pillow case. Volunteers from the Smoky Mountain Quilters Guild were on hand to teach the three-day long class. Children who signed up for this class walked away with their own pillow case and pillow and a newfound set of skills regarding the intricate use of a sewing machine. Both boys and girls enjoyed learning about this craft and the 4 H club plans to continue classes throughout the school year to accommodate the new sewing enthusiasts’ passions.

Andy’s Trout Farm was another stop in the busy 4-H schedule. Boys and girls who signed up for this trip experienced a lesson about the trout population and an opportunity to fish at the farm and catch their very own trout to take home and cook. Each child was given a fishing pole to use along with worms to bait the hook. Every child who fished there was assured to catch one trout, which was cleaned, wrapped and put on ice for the ride home. The smiles on each child’s face when they caught their fish expressed what a great time they had with their fishing experience.

A home for the birds

In July, children were able to make a birdhouse at woodworking class. Instructor Paul Chew, who is an experienced woodworker, provided lots of tips and tricks to teach the class how to craft wood into wonders. With the use of several mechanical woodworking machines and lots of sanding, each child was able to craft, paint and take home a beautiful bird house for their feathered friends to nest in. Throughout the year, 4-H offers woodworking classes to children of appropriate age, on a monthly basis. 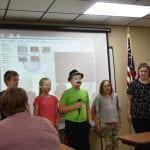 Students at the 4-H Film Academy recently learned how to create a YouTube video about cooking. At this two-day camp, a YouTube expert from was on hand to teach the kids about editing tools and how to create their own video.

Ben Walker, of Backlot Cinema, spoke with the class. He explained,  “I was able to go and talk to the group at the 4-H extension office about video production on behalf of Backlot Cinema.  Backlot is extremely thankful for these type of opportunities and looks forward to seeing the building up and success of our youth. 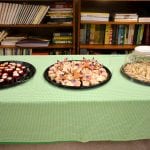 “Carol Pitts, Extension Program Assistant was doing a great job of incorporating two very popular topics –food and video. We talked about goals in making a video, the intended audience, the length, the content etc. Within the hour we discussed camera angles, lighting, editing, and post production (video editing). Ideas were given by the class about how they might incorporate all that would be needed to make their videos. We had open discussion and Q&A type setting. It was a fun time.

“It always impresses me how smart kids are, and what they already know. They are growing up in an age where media is everywhere. It is very likely that many of them will work in a field that requires them to use and possibly even create media.  They are advancing faster in this area than anyone in the past.

“At a young age, some of the attenders of the class are already aspiring YouTubers that have created videos with the intent of making money and/or entertaining others.

Those that are willing to learn and work at it, will succeed. I told them to learn and build from what others are doing as well.

“I personally can’t wait to see what they created. We look forward to the future of their group at 4H and what Mrs. Pitts and team will work with them on next!” he concluded.

Children were then placed into four groups, with each group having to prepare a meal to showcase, via a YouTube video.

Group one created a Thanksgiving Turkey sandwich made of turkey, cream cheese, cranberry sauce and walnuts all  packed onto two slices of sandwich bread.

Group two made mini strawberry shortcakes. By slicing the strawberry in half and scooping out the inside they were able to fill the scored out fruit with icing, sprinkles and whipped cream.

Group three whipped up and “Orange Julius” drink. “Orange Julius” is a well known drink in New York City, which can be found being sold on most street corners. The 4-H Group was not going to allow New York to be the only place to appreciate this delicate smoothy. The children made their own drink with orange juice concentrate, water, milk, sugar and ice cubes.  A drop of yellow dye gave the drink a bright orange color. The ingredients were placed into a blender, poured out into small paper cups and garnished with whipped cream and sprinkles.

Group four was not to be outdone. These kids whipped up some tuna pinwheels. A can of tuna mixed with mayonnaise, mustard, and onion served on a tortilla shell was the brainchild of this group of chefs. With a bit of lettuce and cheese the tortilla was rolled up and held together with a toothpick. Some Ranch dressing was added to enhance the flavor to make a scrumptious tuna pinwheel.

Group one’s top cooking tip was to wash your hands for 20 seconds with hot soap and water before touching any ingredients. Group two agreed with that practice adding that soap was really important, not just rinsing your hands. Groups three and four added that it is wise to put your hair up while preparing the food.

Each group then armed with the skills they learned from Walker and  Pitts, began preparations to film their video.  Family members were invited to watch the YouTube preview. The four groups each did an outstanding job producing the cooking show, mixing in humor along with talent and satire.

Abby Young, one of the participants, said, “4H is the most fun thing to do in North Carolina.” Annie Brown added “it is fun to interact with other kids.” Alex Keener agreed “the thing we did with filming brought the kids together.”  Shelby Cyphers said, “it’s fun to interact with kids and you learn good stuff.”  Lillian Brown agreed, “it’s a fun and creative idea and it brings out the differences and similarities in kids.” This activity was such a hit that Pitts felt that next year they might extend the two-day class into a whole week of activities.

The BBQ Bootcamp activity provided a chance for students to find out just how meat gets to the supermarkets and ultimately the table.  They learned how beef is raised, made into usable cuts, the name of the different  cuts and how to properly cook the juiciest burger to a safe temperature.  This two-day class took children on a tour to visit a local processing facility, owned by Ben Ledford. Blalock’s is located in Rabun Gap, Ga., and has been their family farm for more than 60 years. While there, the group was able to see what a cow and pig carcass looks like when it is being prepared for processing into steaks and chopped meat. Students learned about health and safety measures that the farm adheres to. They learned that the whole process is called “farm to fork.” Jacey Begnaud, was one child who took the tour.

“This was a really cool experience, you got to see where meat actually comes from. It was cool to find out beyond the scene,” said Jacey. 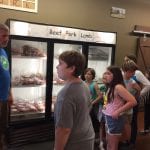 Jessica Keefer was another student who went on the trip. She remarked, “it was cool to see how the animals were being cut up into steaks. I also liked having a partner to work with when we prepared our burgers.”  Her sister, Katie Keefer,  did not feel the same about her experience at the processing plant.

“I felt very sad, it was disgusting to see the animals that way.”  Katie also said that she wants to be a veterinarian when she gets older so she doesn’t like to see bad things happen to animals.

The next day, the group was able to actually cook their own hamburgers on a barbecue grill. With a bit of instruction from Julia Sawyer, an instructor at the extension center, the students learned how to use a  barbecue grill outside and how to cook meat to a proper temperature to guard against E coli, which is a deadly bacteria. The end point temperature to cook beef, so that the bacteria is killed is 160 degrees. They learned that a gas grill must be at least 10 feet away from a structure. They also learned that marbling (white specs of fat) in beef gives it a juicy and tender flavorful taste. After learning safety rules and cooking tips, students were able to create and season a burger to cook and then enjoy for lunch. Some kids even made a second burger to take home for a family member.

During a trip to the Great Smoky Mountains National Park children were able to spot elk, turkey and other wild animals. They visited with a Park Ranger who swore them in as Junior Park Rangers, giving them an official certificate and badge. The group learned about the mountains, animals, the forest and the environment. Josh Keefer was among the children in the group. He excitedly exclaimed, “we saw Elk, lots of them, and turkeys, lots of them. It was a really fun adventure and I want to do it again next year.”

Kids who went on this trip were able to enjoy a picnic lunch and go wading in a pond.

The 4 H summer relief program will also be taking children to an Asheville Tourist ballgame, make a leather craft and visit the Joyce Kilmer Forest as they wind down the summer and prepare for the school year.

Enrollment for the school year 4-H club is free for children ages 5-18. To enroll, call (828)349-2046 for further information or visit Macon.ces.ncsu.edu for online enrollment forms.

‘Girl Talk’ gets real at MVI