Someone asked me not long ago how I am able to spot so many interesting plants from the car.   I had to explain that I am not the main spotter but have a designated driver who has the eyesight of a dragon fly. He looks a little strange but in a fraction of a second, he can see above, below, right, left, front and back.

Not long ago driving along a remote country road I was asked if I had seen a purple blooming plant.  He was looking left and so did I and did not see it.  “Right  side.”  We had to back up because we had already passed it.   Sure enough on the right in a fence row were clusters of purplish pink blooms.  At this point I am supposed to become the expert identifier.  My first impression was that it was a wisteria growing on the fence but the bloom clusters resembled a locust or even a sweet pea but purple (?) and it had woody stems.  Locusts grow as trees not shrubs.  So,  we photographed it and recorded the mileage so photographer Karen Lawrence could find it just in case it was something interesting.

The computer has made me lazy.  When I got home, I Googled trees and shrubs with purple flower clusters- and up it popped: “Purple Robe” locust or more accurately, Robinia pseudoacacia “Purple Robe.” What a find, an uncommon cultivar that I had never seen in Franklin or anywhere else.  If I had needed to use a field guide and/or a plant identification key, I would have also needed foliage samples or photos and plant anatomy knowledge that I likely had forgotten again.  Remember what a stigma is?

Locust trees, endemic to our area, are more commonly named Black Locust.  These native trees have fragrant white blooms that are edible.  Those so inclined put the blooms in salads. Black locust is better known for its rot resistant wood.  It has been used for house construction for years, split rail fencing and ship building.  As firewood it has the same BTU equivalent as coal. It is known as the strongest wood in North America.

Some classify Black Locust as invasive.  It has spread into larger ranges. It is curious that a plant is considered invasive on the continent to which it is native.  There are two native populations one in the Appalachian Mountains and the other from the Ozarks.  It is now found in all 48 lower states mostly from human activity.  It does have seeds that easily germinate and it also produces long underground runners or suckers called stolons.  In fact, what we found along the road were side shoots or stolons from a tree no longer standing.  There was not a parent tree in sight. Purple Robe locust evolved from a manual (man-made) cross from two other rare manually created cultivars not on the market.  So, what we found could not be from a  pollination accident like the work of a honey bee.

This tree was named in honor of a French botanist Jean Robin who introduced this plant to Europe in 1690.  Its species name pseudoacacia was chosen because the foliage resembles the acacia tree.  Hence, it has another common name False Acacia.

The Black Locust is not without problems.  It is very susceptible to locust borers and leaf miners.  In late summer the locust leaf miners’ damage becomes very obvious as the leaves turn brown. It is late enough in the growing season that the trees have already reserved lots of energy for next year so they survive the attack.

Black Locusts are considered early succession trees or are called a pioneer species.  They are often the first to populate cut over areas.  They have nitrogen fixing bacterial nodules on their roots.  The nitrogen addition improves the nutritional value of the soil.  This enables them to grow well and quickly even in poor dry soil. You more often see them growing on the edges of forests as they are very shade intolerant.  There are many along both sides of Hwy. 129 driving to Hayesville.

Finding Purple Robe locust was particularly interesting because my favorite tree at Smith Gilbert Gardens is Robinia pseudoacacia “Frisia.” This cultivar has fabulous golden yellow colored leaves all summer long.  It has just a few small thorns, only occasional blooms and produces no seeds.  Maybe it does sucker? I planted it in a field that is mowed regularly so if suckers were produced, they did not survive the mower.  Over all this tree has a bright cheerful effect on a garden.

Purple Robe according to Michael Dirr is one of the prettiest forms with dark rose-pink flowers. This cultivar begins blooming in May and its blooms last longer than the species.  Apparently, its new growth emerges bronzy red.  Several reports state this form is seedless and also without thorns.  However, the photograph Karen made shows a few small thorns.  This tree grows easily to 30-40 feet. It is hardy to zone 3.  Locusts in general are no trouble to grow.  But Black Locusts and all its varieties have to be watched for suckers if you do not want them to spread into a thicket.  You cannot just plant a locust and walk away.   What we found in a fence row were definitely suckers.  Mowing the adjacent pasture confined the suckers to the fence row.  No telling what happened to the original tree. 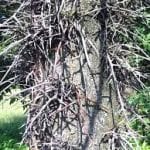 There is another locust Gleditsia triacanthos or Honey Locust that occasionally is found here.  A quick easy way to tell them apart is that Honey Locusts have dense clusters of large sharp thorns on the trunk.  Black Locust thorns tend to be shorter and, on the branches, not the trunk.

Karen Lawrence is a professional botanical and wildlife photographer from Franklin. 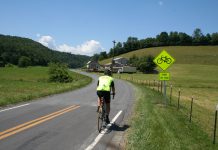 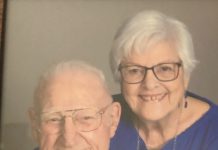 Volunteers remove 4 tons of trash from Cullasaja Gorge on Saturday