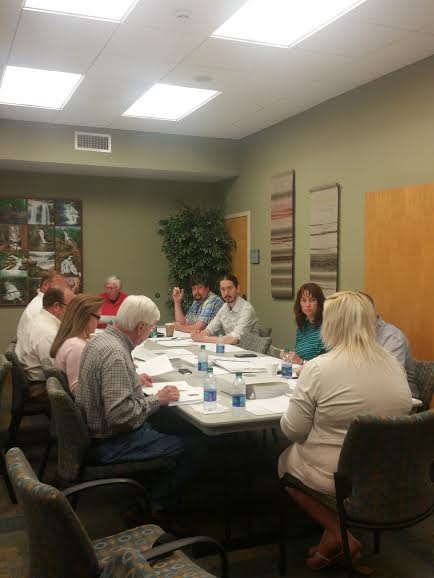 Franklin Town Manager Summer Woodard went department by department Monday night during a special budget work session with the Franklin Board of Aldermen. Woodard went over the town’s $8.5 million budget line by line, calling attention to significant changes in the proposed budget over the current year. While Woodard’s budget was presented without the need for a tax increase, after she finished presenting the budget to board members, Mayor Bob Scott called for a two cent tax increase, which would generate $120,000 in additional revenue in the coming year.

“I think that all we are doing is maintaining and we are not doing a lot of improving,” said Scott. “A two cent increase would mean $120,000 more this budget year. We could then discuss as a board priorities on how to spend it or where we may need it.”

Aldermen disagreed with Scott, saying while additional funds may be needed in the future, rather than raising taxes now and finding ways to spend the money later, planning should be done and specific priorities should be identified.

“I totally agree we need to look toward the future, but I don’t think a tax increase is the right thing to do right now,” said Alderman Patty Abel. “We need a plan in place first.”

Scott said there are areas that could use the money such as sidewalks or bringing downtown up to par, and once the money is in place, projects and ways to use it can be identified later.

“Like a few other governmental bodies, we are so proud of a low tax rate, but what are we doing to improve services when we are bragging about a low tax rate,” said Scott. “I really don’t see how we are doing the public a favor by keeping our tax rate low. We aren’t hearing any long term strategic planning from this board.”

“This board just got done going over the details of a multi-million dollar water and sewer expansion project that was put into place to plan for our future,” said Mashburn. “So don’t sit there and tell us that we aren’t doing our jobs.”

“I didn’t say that,” Mayor Scott responded. “I just don’t think we have the vision.”

“Just because some people on this board may have a different vision than you, doesn’t mean we don’t have a vision for this town,” replied Mashburn.

Alderman Joe Collins agreed that a tax increase without a plan in place wasn’t right for the town.

“I don’t think that is fiscally responsible,” said Collins. “Maybe we can look at a tax increase for a future budget, if we have a plan, but it isn’t the right move right now. Especially when we are proposing a four percent water and sewer increase, on top of a five percent increase last year.”

The public was given the opportunity to speak during Monday night’s budget work session, however, no one from the public was in attendance. The town of Franklin Board of Aldermen have a public hearing scheduled for Monday, June 6, at town hall. The board is also scheduled to vote on the proposed budget during the meeting.