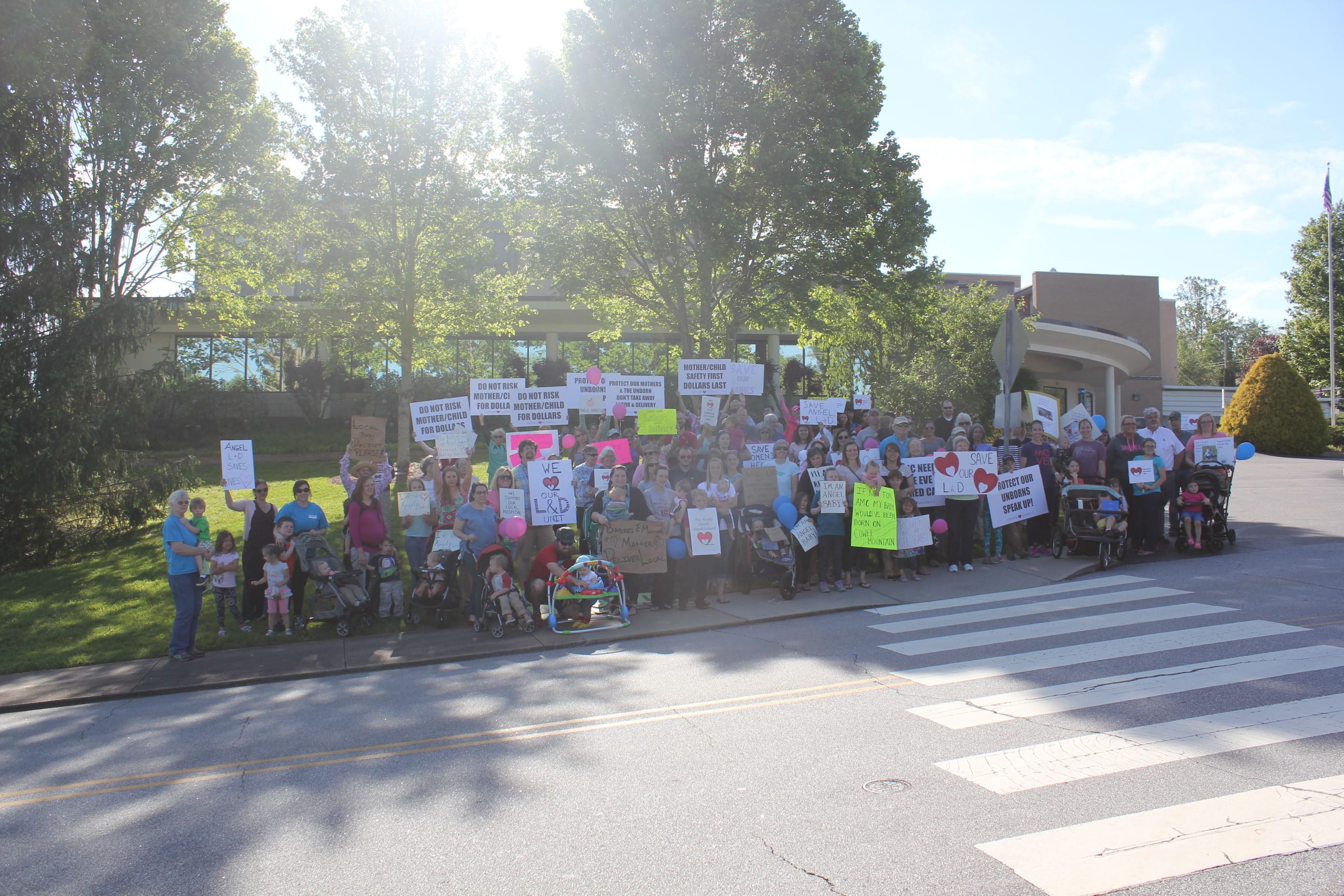 Despite the Macon County Community’s outcry to keep Labor and Delivery services at Angel Medical Center, members of AMC’s Board of Directors released a statement Tuesday morning that said the decision to close the unit still stands.

“As members of the community, the board members at Angel Medical Center did not want to ever face the very difficult decision to stop providing labor and delivery services at our hospital,” reads a statement sent from Mission Health on behalf of the board. “Many of us used those services in our family and we realize the value they provide to our community.  Like you, our neighbors, family, and friends work in that department and we are proud that year after year, the women’s department is recognized for the quality they provide. But the decision was not about whether to offer labor and delivery services or not.  We were faced with a choice of making sure that the hospital can break even now and in the future so that we know there will be a hospital in Franklin.  The hospital lost large amounts of money prior to our affiliation with Mission and will lose money again this year without a major change and reduction in our costs.  Even more important, we are forecasted to lose money every year moving forward absent changes in our operations.  Unfortunately, labor and delivery services lose more than $1 million every year and those losses are expected to climb. The board has a community and a fiduciary responsibility to make sure that Angel Medical Center does not become one of the hundreds of rural hospitals that have tragically closed because they simply could not afford to stay open.”

While the news has been a devastating blow to the community, according to a report published in 2016 by Health Services Research, labor and delivery units are closing across the country because of the high costs associated with operating the units in rural areas. The report showed an analysis of 306 rural hospitals in states with large rural populations found that 7.2 percent shuttered their obstetrics units between 2010 and 2014.

In rural areas, it can be difficult to recoup the costs required to run an obstetrics ward, including expensive monitoring equipment and high staffing needs. Mission Health CEO Dr. Ron Paulus said that the high cost of operating the unit in rural America, paired with the lack of paying customers compared to Medicaid and no-pay patients, the services are too expensive and could lead to the closing of the hospital altogether.

The study also showed that while closing labor and delivery units were a common trend to help the financial standing of the hospital, the implications of such a decision means an increase in the burden on the patients and puts newborn at risk. According to the study, having to travel for obstetric care is associated with higher costs, greater risk of complications, and longer hospital stays. This also causes financial, social, and psychological stress for patients.

The study looked at 306 hospitals in nine states, including North Carolina. According to the study, most of the hospitals that were closed in rural communities delivered less than 100 babies a year. Angel Medical Center, however, delivers around 400. Difficulty with staffing is another issue. Rural areas have a hard time with retention, recruitment, and liability issues surrounding obstetricians.

Staffing also contributed to AMC’s decision to close Labor and Delivery. Dr. Paulus said that with only one staffed pediatrician, which is required by law in order to provide the services, Mission Health was spending significant dollars to contract with staff and bring them to Franklin to provide the services. While Franklin has several pediatricians and obstetricians, the number of those doctors willing to work with Mission Health was limited.

Legislation was introduced in 2015 to address the issue, but failed to gain steam. The bipartisan bill was introduced in Congress and would require the federal government to designate maternity care health professional shortage areas. Similar designations already exist for primary care, mental health, and dental care.

AMC’s decision to close Labor and Delivery was once again touted as a way to keep Angel Medical Center afloat, which according to the board, may not be possible without the change.

“Over the last five years, Mission has invested more than $11 million into Angel to ensure the hospital remains financially viable,” read the statement released by AMC’s Board of Directors on Tuesday morning. “Without the affiliation, AMC likely would have closed our doors four years ago. While we understand the community’s concerns, we are very hopeful for our future and will continue to work with the community and Mission Health to look for the greatest opportunities to provide high quality, compassionate and sustainable care in Macon County.  We will work with Mission to develop a new hospital design that could incorporate a labor and delivery wing in the future, provided that financing is available and that the health care funding landscape changes so that labor and delivery services can break even.  For now, we will continue to focus our efforts on making sure that Franklin has the highest quality hospital available for our community now and in the future.

According to The North Carolina Rural Health Research Program (NC RHRP) at the Cecil G. Sheps Center for Health Services Research, which tracks rural hospital closures, 72 rural hospitals closed between January 2010 and April 2016, compared to 42 closures between 2005 and 2009, and since the 2008-2009 recession, the annual number of closures has increased each year. More than half of all rural hospital closures since 2010 were in the South and few Southern states have expanded Medicaid under the ACA.

According to Dr. Paulus, part of Angel Medical Center’s difficulties is as a result of the fact that it is designated as a Critical Access Hospital (CAH). Because of the CAH designation, the hospital can not receive the same funding assistance as hospitals such as Harris Regional Hospital.

But despite Dr. Paulus’ explanation of being a CAH as a problem, according to national studies, CAHs are often in better financial standing, because they receive a fixed, cost-based medicare reimbursement for services.

Under the Affordable Care Act, 32 states voted to expand Medicaid utilizing federal dollars in their states. North Carolina was one of the states who did not elect to expand the program. The expansion of Medicaid – which the Affordable Care Act made possible – is a separate piece of the regular Medicaid program. North Carolina has been part of the regular Medicaid program since 1970. But it remains one of 18 states that has not accepted the expansion.

Medicaid provides government health insurance for low-income people. In 2015, the state reported, 1.8 million North Carolinians were enrolled – most of them children. The expansion would cover people who don’t qualify for either the Affordable Care Act health care subsidies or for regular Medicaid coverage.

The state pays about one-fourth of the costs for regular Medicaid expenses in North Carolina, according to the N.C. General Assembly Fiscal Research Division. The federal government pays 60 percent, and the rest is funded by drug companies and other sources. In 2015, when the bill came out to $13.8 billion for North Carolina, the state paid $3.7 billion.

All citizens are paying for the Medicaid expansions through a federal tax. The states that accepted the expansion, are able to benefit from the tax they are paying, North Carolinians however, are paying the tax, but not getting the benefit. The expansion is funded almost entirely by the federal government – 95 percent now, and dropping to 90 percent by 2020.

North Carolina leaders voted to not expand Medicaid because of the federal reimbursement rates dropping beginning in 2020. The state interpreted that as a shift to state responsibility. According to a 2015 report from the U.S. Department of Health and Human Services, Medicaid expansion in the decade from 2015-24 is estimated to cost $717 billion. That includes $667 billion from the federal government.

Although North Carolina residents are currently paying for the expansion for other states, if the state elected to expand Medicaid, the amount North Carolina would contribute would increase. In several studies by researchers from Georgetown University and the Wake Forest University School of Law, and depending on whether the federal government is paying for 90 or 95 percent of the costs, estimates show North Carolina’s state government would be on the hook for between $210 million and $600 million per year in the near future if Medicaid was expanded.

If Medicaid was expanded in North Carolina, which North Carolina Senator Jim Davis said he did not support, an estimated more than 624,000 residents would become newly eligible for coverage. A significant number of them (estimates range from 219,000 to nearly half a million) are currently in the coverage gap, with no realistic access to health insurance at all, unless Medicaid is expanded.