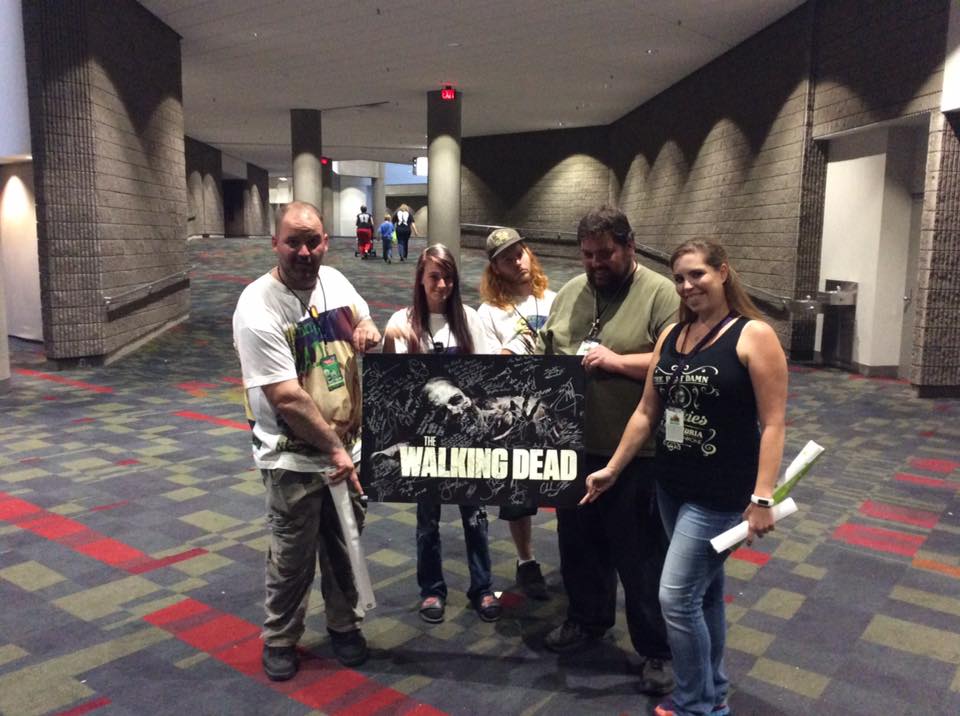 When 15-year-old Nick Bell tragically lost his life in August, his family set out on a mission to honor his memory. Nick was a faithful fan of AMC’s “The Walking Dead,” going to conventions to meet the actors with his dad, Doyle, as often as possible. Knowing his love for the show, Nick’s uncle George Bell began organizing a memorial walk, “Walking for the Dead” from Nick’s home in Hayseville to Senoia, Ga., where the TV show is filmed.

“We started the walk with around 25 people, we left from Hayesville with one mission in mind, somehow it was our goal to bring awareness to the life of Nicolas Lewis Bell,” said George. “I thought about it everyday from the time we planned the walk until the time came for us to make the journey.”

George’s mission for Nick was two-fold. He wanted to complete the walk, which

crossed the area of highway where Nick tragically lost his life after being hit by a semi-truck while on the way to the park to meet a friend to play basketball. He wanted to honor Nick and raise awareness to hopefully be able to get Nick’s Walking Dead poster signed by the stars of the Walking Dead, a project Nick had started with his dad while attending various conventions.

“I wanted so much for the story to get big and hopefully someone important would hear our story and help us to get Doyle and Nick’s Walking Dead poster completed,” said George.

George, accompanied by Doyle and a few friends, began the 146-mile walk in Nick’s memory on Oct. 1 and had no idea what to expect. “As much as I thought about what could, would or might happen, I was in for a huge surprise myself,” said George. “We left on Oct. 1 and headed south to Senoia where ‘The Walking Dead’ is filmed. A stranger to all of us, when we started, Rain Plainview from L.A., Calif., heard of our story and traveled to North Carolina to participate in our walk, not knowing any of us.

Rain was just one of the people George met along his journey for Nick. Throughout the walk, strangers became friends as they shared support of George’s mission and Nick’s memory. “It was all such a big surprise,” said George. “We met many people during the walk. We carried a handmade poster for the public to sign and show their support.”

The walk was physically challenging, with mountain terrain to cross over the first few days. “As we were going through, the first three days we were going up and down huge mountains,” George recalled of the walk. “Almost no cell service, but the mission, the cause was bigger than any one person and that was the motivation to keep pushing. There was moments where I couldn’t even stand up much less walk two feet away to get a drink of water. As much as it was a huge challenge, people were leaving us often due to the overwhelming challenges to complete it. But  13 days after we began the walk, four people finished the walk into Senoia,…  Sandy McCormick, Clinton Hopper, Doyle Bell, and myself. The feeling of victory like I never did before, and it was all for Nick.”

George’s mission to get the attention of the show to get Doyle and Nick’s poster signed was also successful.

“When I was planning the walk I sent thousands of emails, tweets, and Facebook messages,” he said.”Before we left for the walk I got a reply from Ashley Golstein, who is the charity event coordinator for Walker Stalker convention and they said we were approved and the Walker Stalker Convention supported our cause.”

Convention organizers sent George four tickets to the conference and another stranger purchased a fifth ticket to ensure Clinton Hopper could attend with the family, since he completed the walk in Nick’s memory.

“Clinton did walk the entire walk and I wanted him there and I know Nicolas wanted him to be there,” said George. When we got to the convention Mrs. Goldstein hand- delivered us this card that said FanFest on it. It was a card that let all celebrity guest know that we were a charity and that FanFest supports the cause. The convention sells a platinum pass that allows its buyer to skip the long lines and go straight to the front, as we would approach the end of the line to meet a celebrity I would present the card and the attendant would say, ‘Right this way and she would direct us to the front of the line.'”

George said the entire experience, and being able to get the poster signed by so many people that Nick looked up to was more than he ever could have asked for.

“It truly was a once in a lifetime opportunity,” said George. “There was so much love and compassion flowing from the stars of the show and the convention organizers…Mission complete. I feel an overwhelming since of victory. The love I have for Nicolas and my brother was the inspiration for it all. I just wanted Doyle to know how much I love him and how much Nick’s memory means to me.”

The poster got over 20 signatures over the weekend in Atlanta at the convention, but for it to be completely finished, the family lacks just three signatures, which they plan to continue working to get for Nick.

“The hardest part of the whole thing was the very painful realization that Nicolas is not with us anymore and I will never see him again in this lifetime,” said George.”However, so much has happened as a result of his death in my eyes, if I could take it back I would in a second but that’s impossible. Like Humpty Dumpty, the pieces will never fit back together like they were but I know I must sort through the usable debris and pick myself up and keep going, something I found during the whole experience that I lost, I found love, I found love between people that I forgot about,

I didn’t see it coming either. I feel like I am a different person now than I was before Oct. 1.

I see life from a whole new perspective right now and it hurts me that it took a very tragic and close death for me to find it.”