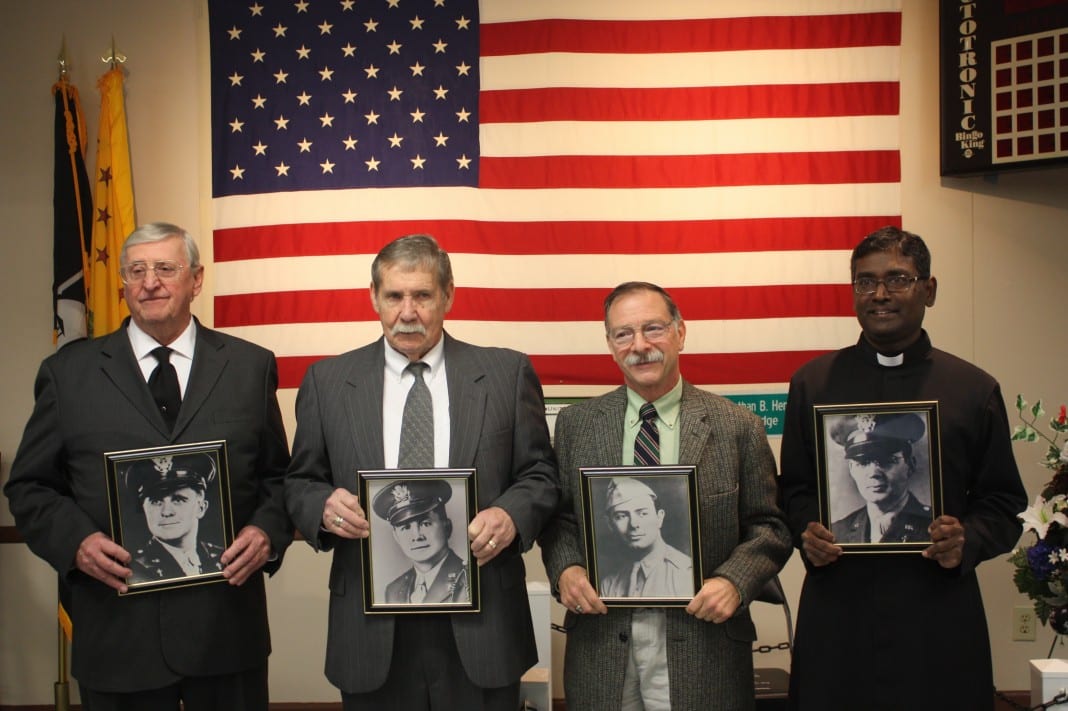 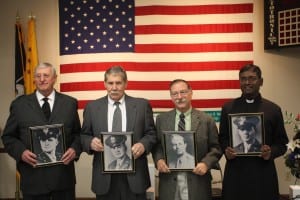 Post Commander James McGill opened the ceremony and led the audience in the Pledge of Allegiance.  After the Invocation, Post Chaplain Carl Moyer turned the floor over to Ken Carpenter who shared the “Saga of the Four Chaplains.”

On Jan. 23, 1945, the USAT Dorchester, an overhauled luxury liner converter to troop carrier, sailed out of New York harbor with an American Convoy of six ships, including three United States Coast Guard Cutters.  They were transporting 902 American servicemen through the icy North Atlantic waters to Greenland for deployment.

As the convoy neared its destination, the five other ships had sailed on ahead of the Dorchester since Greenland was only about 150 miles away.  The evening of Feb. 2, 1943, was routine as the ship plowed through the dark, frigid waters.  The men aboard the vessel had not detected the Nazi submarine (U-Boat) that had been stalking them.  Then, at 12:55 a.m., Feb. 3, 1943, the German -223 launched three torpedoes at the Dorchester.

Only one of the torpedoes found its target, scoring a direct hit midship exploding in the ship’s boiler room instantly causing a conflagration of burning, living hell.  With the boilers destroyed, the emergency whistles to abandon ship were inoperable.  Many of the service men died instantly, with scores of others trapped below decks.

?The deck of the ship quickly became a scene of horror and confusion as the service men scrambled to the upper deck.  Men were putting on life jackets and frantically attempting to launch life boats and rafts that were available.  The ship was listing to one side making it impossible to get some of the emergency boats into the arctic sea.

In the midst of its raging chaotic inferno, the four United States Army chaplains on board began moving through the men calming their fears, handing out life jackets and directing them to available life boats.  When the stock of life jackets ran out, the chaplains saw four young servicemen without any life-saving equipment.  Quickly, these dedicated men of God stripped off their own life jackets and forced the young servicemen to take them.  The chaplains had given up their only possible means of survival so the young men would have a chance of living. 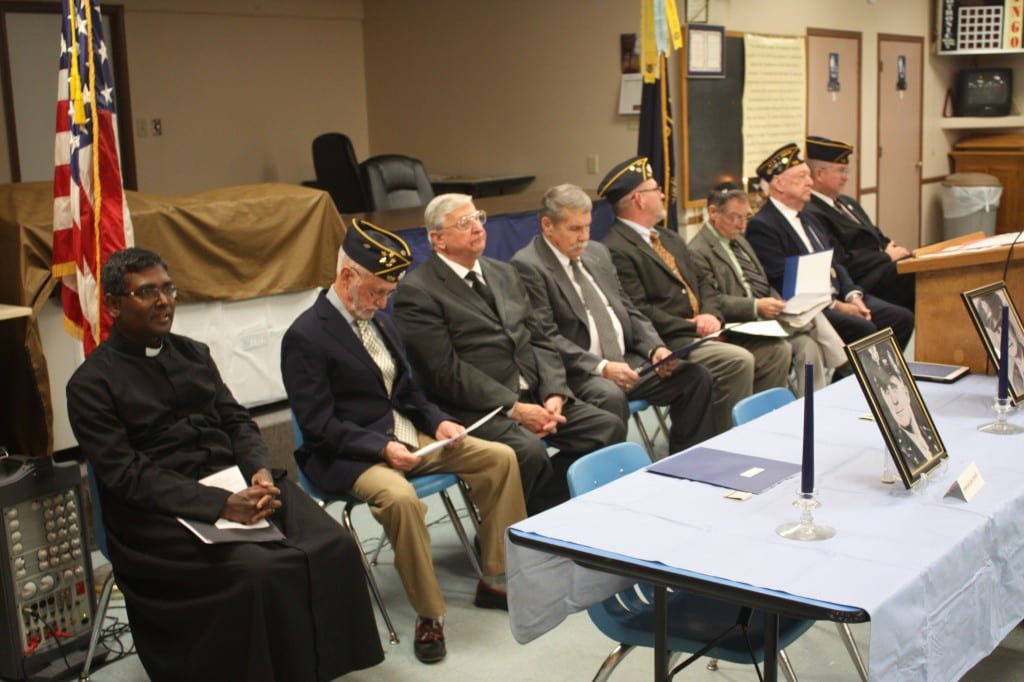 This selfless act of heroism by these four chaplains was a testament to their faith in God to love humanity enough to willingly give up their lives in order that others could live.  Denomination meant nothing to them as they all ministered to the suffering and dying men.  George L. Fox and Clarke V. Poling were protestant ministers, Alexander D. Goode was a Jewish Rabbi, and Johnny P. Washington was a Roman Catholic Priest.

Within 20 minutes, the Dorchester had slid into the depths of the North Atlantic.  As the vessel was going down, survivors in lifeboats witnessed the four chaplains clinging to the listing deck with their arms linked together and heads bowed, praying to the God and Father of all mankind. The Dorchester went down, taking with it the “Four Immortal Chaplains” and 668 soldiers and sailors.

The Coast Guard cutters, Escanaba and Comanche, were able to rescue 230 service men from the waters, but as Feb. 4 dawned and other help arrived on the scene, scores of bodies floated on the waters, unable to survive the 34 degree water temperature and 36 degree air temperature.

Four ministers from Macon County profiled the lives of these four heroic men.  First, Rev. Gary McCoy of Central Baptist Church spoke about Chaplain George L. Fox.  Fox was born in 1900 and had actually served in the United States Army Ambulance Corps during World War I.  He had been awarded a Purple Heart and a Silver Star.  After the war, he entered Moody Bible Institute, obtaining a theology degree in 1934.  He was a Methodist preacher, joined the Army Chaplain Corps in 1942, and was assigned to the Dorchester in January 1943.

Rabbi Zvi Altman then profiled the life of Chaplain Alexander D. Goode, a Jewish Rabbi.  Born in 1911, he graduated from the University of Cincinnati in 1934.  He was assigned to Beth Israel Synagogue in 1936.  He was a 1940 graduate of Johns Hopkins.  He also joined the United States Army Chaplain Corps in 1942 and sailed on the Dorchester in January, 1943. 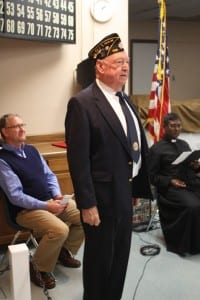 Father Francis Xavier from Our Lady of the Mountains Catholic Church in Highlands shared the life of Johnny P. Washington, a Catholic priest.  He was born in 1908. In 1931, he received his AB degree.  After graduating from Seminary in 1933, he was ordained as a priest in the Catholic Church in 1935. As the other three men, he joined the Chaplain Corps in 1942 and sailed on the Dorchester, January 1943.

Rev. Radford Penland of The Church of Christ shared the life of Clarke V. Poling, a pastor in the Reformed Church in America.    Poling was born in 1910, the son a of minister.  He attended a Quaker High School in New York.  He graduated from Rutgers University in 1930 and then moved on to Yale Divinity School after which, he was ordained.

After these remarks, Jack Castle summed up these “Princes of Peace.”  In this, he said that these men of God had not joined the Army to fight the Axis Powers and the Japanese, but they volunteered to serve humanity, to serve the military men who were waging the war against these powers. Their heroic act was not only an example of how to die courageously, but how to live a life of purpose. Their purpose was to serve God with their entire life and when the time came, they lived their life’s purpose by making that supreme sacrifice.

In the 1940s all four men were put forward for the Congressional Medal of Honor, but the request was downgraded to the Distinguished Service Cross, the next highest awarded medal.  Along with this medal, they were all also posthumously awarded Purple Hearts.  However, in 1960, Congress created the “Chaplain’s Medal for Heroism” and these medals were awarded to each chaplain’s next of kin by Secretary of the Army Wilbur M Brucker at Fort Myer, Virginia on Jan. 18, 1961.  Finally, the American Legion, in 2004, asked that these men again be considered for the Medal of Honor.  This request is still pending.

John 15:13 sums up the life and purpose of each man.  “Greater love has no one than this, that one lay down his life for his friends.”  (NASV)