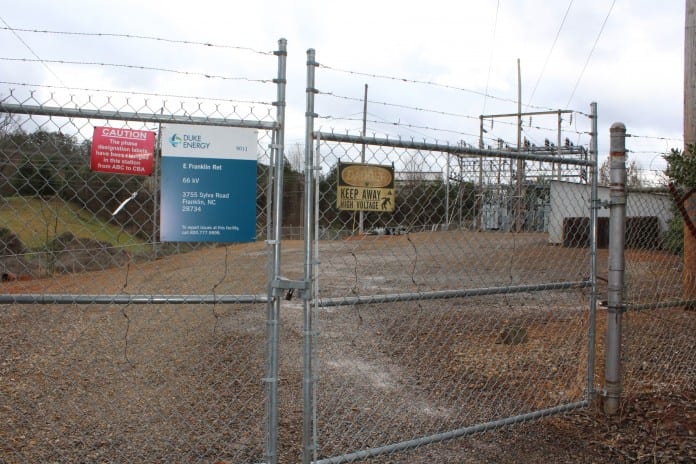 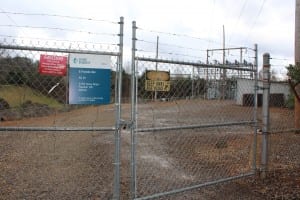 Just before 7 a.m. on Tuesday, Feb. 16, Macon County’s 911 Dispatch center began receiving double alarms via email, alerting dispatch to problems with the system. The county’s I.T. department was able to quickly trace the problem to an interrupted fiber connection that had been cut at the Duke Energy substation along the Sylva Road.

“Damage occurred to Duke Energy equipment at the East Franklin Substation on Feb. 16,” said Lisa Leatherman, District Manager for Duke Energy Carolinas. “An investigation revealed a portion of fencing surrounding the substation was cut to gain entry to equipment. In search of copper, the intruder cut a fiber impacting Duke Energy, Entegra Bank and Macon County EMS. It took approximately nine hours to repair and restore service. Duke Energy is focused on providing safe and reliable power and reminds the public to not trespass on secured substation property where improper contact with energized equipment could cause death by electrocution.”

“A hole had been cut in the chain link fence and two sets of footprints were found inside the fenced area of the substation,” said Todd Seagle, director of Macon County dispatch. “The fiber line had been cut and was lying on the ground. It appears someone was possibly looking for copper wire to steal and cut the fiber line connecting our main and primary sites not realizing it wasn’t copper.”

Because of the October upgrade to the system, the county’s 911 phone system performed just as it was designed to during the disruption.

“We were still able to receive 911 calls from the trunks that terminate at the backup site but these calls defaulted to 10-digit administrative lines because of the fiber line cut,” said Seagle. “We were not able to receive the Automatic Number Identification (ANI) or the Automatic Location Information (ALI) on any 911 call that rang in on one of the four trunks at the backup site. It also takes approximately 30 seconds longer for the 911 call to connect with the dispatch center if it defaults to an admin line. I know this doesn’t sound like a good thing but I’d rather at least get the delayed call without ANI/ALI than not get the call at all.” 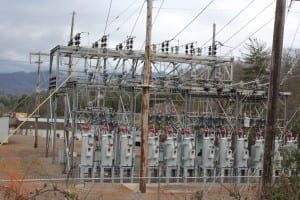 Macon County dispatchers are trained to gather information from callers, even when the system collects the information automatically. Because the county has four trunks that were able to gather ANI/ALI information, Seagle contacted Frontier and had them “busy out” the four trunks at the backup site.

“This was done so that all of the 911 calls would ring into the main dispatch center with their automatic ANI/ALI information,” said Seagle. “We were down to only four 911 trunks during this time period instead of our normal eight, but those four trunks were fully functional.”

The lines were restored by around 8 p.m. on the same day as Duke Energy had fixed the fiber line cut and Seagle had Frontier “un-busy” the four trunks at the backup site.

“Thanks to the upgrade on the phone system that was completed in 2014, the redundancy we have built into the network, and the hard work of everyone involved from county I.T. employees to Duke Energy and Frontier employees, the impact on the dispatch center was minimal,” said Seagle. “However, it was a normal day in the dispatch center. Had it been a busy day like we’ve seen recently due to winter weather, things could’ve been much worse.”

Macon County Emergency Management Director Warren Cabe noted that while the county’s system functioned as it should, if the backup system was not in place, the theft attempt could been detrimental for lives in Macon County.

“The 9-1-1 system does not have a single point of failure, however, had we not been properly prepared, a single malicious act could have had dire consequences for any of the numerous people that utilize the 9-1-1 system each day,” said Cabe.

The Franklin Police Department responded to the Breaking and Entering at the Duke Energy Substation and while no copper was stolen, the damage to the fiber line is estimated to be between $1,000 to $1,500.