Marina Tkach and the owners of 828 Café in Franklin, David and Beatriz Gomez, have been friends for a decade. They met not too long after Tkach arrived from Russia on a student visa. Gradually, Beatriz said she learned of her new friend’s artistic skills. Thus, when the Gómezes decided last fall to open the “American food with a hint of Latin” café just across from the Little Tennessee River Greenway on Main Street, they enlisted Tkach to paint images on the building that convey aspects of the area’s natural beauty and wildlife.

Tkach, an academically trained graphic designer who also paints watercolors and designs t-shirt art, said the Gómezes came up with the idea to have her paint a large black bear face on the side of the building to greet oncoming traffic into the Town of Franklin. It was her first mural attempt, so she drew the images on paper and then used the buildings’ bricks to establish a large grid, which she drew in chalk. That process enabled her to determine scale – placement of eyes, nose, mouth, ears, etc. She also drew other aspects of the art in chalk before painting the mural.

“I did the large bear first … that took about five hours,” said Tkach, adding that the coordinating smiling mountains and sunshine, as well as the bear on a bike, were added whenever she had a chance to work around caring for her two young children, ages 8 and 4. Most recently, Tkach painted the entire back of the café, where there is outdoor seating, with brightly colored flowers and foliage.

Tkach explained that her parents enrolled her in art school when she was younger. She had a one-day showing, with other local artists, last year in Highlands. She says she was concerned with how the murals would turn out, but is happy with the results and would like to do more “for the town.” 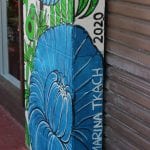 “With our food and our café, we wanted to bring something different to the Franklin community,” said Beatriz Gomez. Some of the regular menu items include Guava French 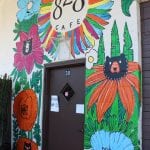 Toast, breakfast bowls, and specialty burritos, sandwiches, and wraps. “The food is nutritious and healthy, with a touch of what’s trending … creativity. And that creativity is also what we want to show to the town with the murals. We think they turned out beautifully and enhance the building with the images and the color. Marina is talented. The murals are all her style; we might have come up with the ideas, but the art is all her.” 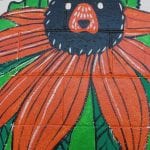 828 Café is open at 50 percent capacity for dine-in, and orders can be called in and carried out. Breakfast is served from early morning until 2 p.m. The café also serves lunch.

Bidwell Street has been transforming into a Halloween destination for decades