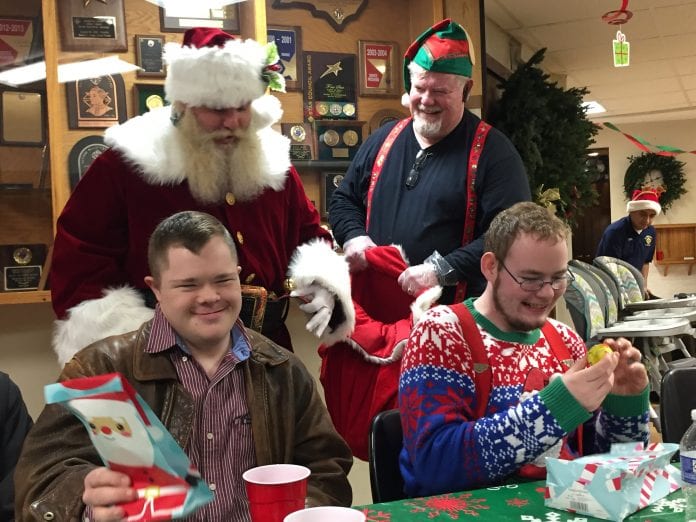 You never can tell who’s a Santa’s helper. 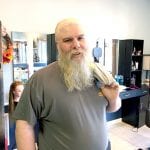 Gary Andrews, 42, is a roadway technician most days. He wears cargo pants, work boots, a nylon button up shirt (unbuttoned, usually) and a florescent yellow vest (it’s required). He has long, golden blonde hair and a bushy beard. He helps make your roads safe. But, right around Christmas time, his beard turns a silvery color. His hair is combed in neat, long strands, all snow white.

He slips off his vest, removes the work shirt with “Gary” stitched above the right pocket. He pulls on and neatly buttons a big, velvet, red overcoat with faux rabbit skin cufflinks. He zips up shiny black boots, and with a tug, buckles an enormous black leather belt – about five inches wide – wide enough to hold up his pants each time he heaves a sack of gifts over his right shoulder.

“Santas need help. Santas need assistance,” explained Bill Matthews, who has a white goatee, rosy cheeks and is a bit heavyset. He says his recent weight gain is not from Christmas cookies, but all the home-cooked meals he gets while averaging 60,000 miles a year on the road for his job.

Matthews was a Santa for the Knights of Columbus for 10 years. For about six of those years, he had an assistant – an elf, if you will – who helped him hand out gifts, collected lists from eager children, and acted as line control for the crowds that often bombard the most popular guy this time of year.

There’s also that stuff about the fake beard and Santa wig – it’s hot, it’s scratchy and it creates tunnel vision for the wearer. Missing a child would be a no-no, even naughty children deserve Santa’s attention. Elf work is how Gary got his start.

“He assisted me for many years, now he’s doing it in a big way,” said Matthews.

It started as far as you can get from the North Pole. Down in Marathon Key, Fla., in the early 1980s when Gary was a young boy. His sister was in the Girl Scouts, and his mother was a troop leader. His mom helped to make the Girl Scouts’ parade float, an event that culminated each year with a visit from Santa.

“I certainly have my inspirations,” said Gary.

“There was this big, boisterous Italian dude – about the same age I am,” he recalled. “I remember he came to my school. I thought it was Santa, but I remember I thought he looked kind of familiar… He was a cool dude.”

Then there was the 2011 documentary “Becoming Santa” about an ordinary man who bleaches his beard, goes to Santa school, and learns about the history that keeps the spirit of Santa alive.

Gary gathered his wife, Sarah, and his 19-year-old daughter, Liriel, into the family kitchen with store-bought hair bleaches and conditioners.

“It turned out pretty white. We didn’t get quite as white as I wanted it to be,” he said. But his family got concerned and stopped– his hair was starting to get brittle.  They worried it would fall out.

If Santa lost his beard, could there be Christmas?

A hair salon fit for Santa 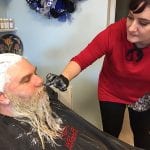 “The things you do to make kids happy,” said Sara Romano, 35, as she washed powdered bleach and 20 volume processing solution out of Gary’s beard.

Romano has become somewhat of a specialist in Santa beards over the past two years. Her boss, salon owner Ron Moss, and Gary had met at church, and she got the okay for two, extended pro bono dyeing sessions to bring the Santa’s helper up to par.

“One week I bleach his whole head and his whole beard, and he’ll deep condition his hair for another week,” she said. “And then he’ll come back, and we do it all over again.”

Gary agrees it’s all worth it. “The real-bearded Santa is just a lot more magical.”

But he’s got to be careful not to reveal his identity in public. Last year, Gary got spotted in a store. “Santa!” a child yelled. Gary immediately went home and shaved off his beard.

“This year I’m not going to do that because I’m firmly attached to my beard,” he said. “No pun intended.”

After the Christmas season is over, Gary plans to dye his beard back. Romano rustled a towel through his “Santa-y” hair as Gary smiled.

And, with the application of silver toner to make the color stay, Gary was sent on his way. With careful conditioning instructions to go, he was one step closer to the North Pole.

The magic of being Santa 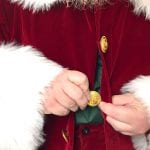 One of Gary’s favorite events of the year is the Knights of Columbus-sponsored Handicapped Christmas Party, held at St. Francis Catholic Church. His wife, Sarah Andrews, is a day program manager for the intellectual and developmentally 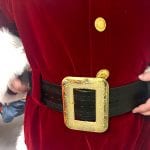 disabled at Macon Citizens Habilities (MCH) on Lake Emory Road. Through his wife, he had become familiar with the clients at the group home, came to know and enjoy their company, and wanted to be part of the event. 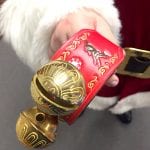 “There’s no personal fulfillment in my job. I work in asphalt,” he said. “We help put the roads in place, but it’s not like we’re saving babies or nothing.”

Most days, Gary is in a laboratory testing the density of asphalt to make sure the ratio of liquid asphalt, air voids and rock and sand material are at safe levels for highways. If you’ve driven on Highway 74 into the Nantahala Gorge, you drove on a road that Gary helped lay.

But even while laying roads, magical things happen to Gary. Like that early morning while working on a roadway in the Great Smoky Mountains National Park, when an elk trotted alongside his pickup truck. Gary sped up, the elk sped up. Gary slowed down, the elk slowed down. It was almost as if a reindeer was following him.

Gary has already invested well over $500 into being Santa, not counting gifts. There’s the $320 suit (it’s more than a costume, he assures), $80 boots, $100 belt, and well, all those hours designing, stamping, hand-sewing and painting tiny reindeers on his leather handbells. “There’s a guy in Fayetteville who specializes in Santa belts – he has some awesome Santa belts,” he said, excitedly.

“His voice gets a little deeper and his laughs get a little more jolly,” she said. Does he bulk up for the job? “Just a little bit. He doesn’t want to wear a fat suit. So, yeah,” she said with a laugh.

This year’s MCH dinner drew about 50 guests and family members ranging in ages from three to over 80.

“These folks still very much believe in Santa,” said Gary. MCH Caregiver Bonnie Bennett has been involved in the Christmas dinner for 18 years.

“They look forward to this event every year. They get to see Santa Claus here,” she said. “Instead of mailing their letters, they will bring them to Santa.”

Down the hall in the St. Francis of Assisi room, Santa was getting ready. Knights of Columbus organizer Luis Jimenez opened the door a crack wearing a tall red Santa hat. It was decided Santa would enter midway through the vanilla and chocolate cake dessert. Then Jimenez left. There was no mirror in the room. Santa could not see how he looked.

Just then, a large, jolly man with a tall green elf hat and festive, red suspenders walked through the door: It was Bill Matthews.

The two Santas looked at each other, smiled and laughed. Matthews sized up his protégé. He helped him adjust his coat, joked about what new article of clothing he would be asking for Christmas this year, and they discussed best practices regarding Santa glove usage: New gloves for every Santa visit.

“These are the gloves from last year,” Gary said, carefully holding up a soiled specimen as if it was a dead fish. “You don’t want to wear that.” The two Santas laughed.

The door opened again. “We’ re finishing the dessert,” advised Jimenez. “We’re bringing him in,” responded Matthews.

They discussed final preparations – who would be handing out what, special thank you cards with a verse from John 15:13 for the caregivers. Matthews spoke eagerly, Gary spoke in slow, drawn-out words, just how you would expect a Santa to speak.

Gary’s family was in the house this afternoon. Sarah had brought the two little ones – his seven-year-old daughter, Leona, and his three-year-old son, “Lex,” short for Alexander.

“He knows that I am one of Santa’s helpers,” said Gary. “I have a direct line to Santa – it’s useful.”

Matthews hustled Santa up, the guests were anxious. The two squeezed out of the room and the elf -like one started down the hall first, entering the dining room and shouting, “Hey everybody! I think I hear the bells of Santa.”

Santa stopped before turning the corner. Raised his hand bell and gave it a few shakes, waiting for a moment as anticipation mounted. He kept shaking the bell rhythmically and louder.

Then, he barreled through a double door into the dining room letting out a merry “Ho, ho, ho, ho, ho, ho.” It was apparent that he had practiced the laugh many times.

The sound of the crowd grew from murmurs to a roar. A young girl yelled “Santa!” and applause erupted.

All the while, a little girl in a crimson dress stood transfixed. She was in an open space where the carolers had been singing and watched as the giant man approached the nearest table in slow, deliberate steps.

Matthews reached into Santa’s sack and drew out gifts for Santa to hold in his crisp, white gloves and deliver to excited faces across the room.

The girl didn’t rush to touch Santa’s soft, puffy coat, or tug on his beard to see if it was real. Rather, with a start, she crossed behind him and over to a woman, standing by a Christmas tree with a small child in her arms.

She looked up at her mother. “I’m so proud of Daddy.”