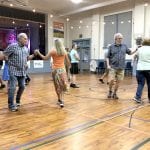 “Rule number one is ‘have a good time,’” announced Charlotte Crittenden, the official “caller” for the Sept. 28 Contra Dance at the Cowee School Arts and Heritage Center. For the past three years, three to four dances have been held annually with approximately 30 to 40 participating.

“Keep smiling and just have fun,” encouraged Crittenden as she assisted newbies a half hour before a Western North Carolina band, Blue Eyed Girl, provided the music for the official contra dance. “It’s mostly about just walking and keeping up with the tempo of the music and listening for the instructions,” said Crittenden, who demonstrated the do-si-do, circle up, the traditional ballroom dance hold, the swing move, and more.

“The swing is the thing,” she laughed. “That’s the move everyone enjoys doing.”

According to dancefacts.net: “Contra Dance is one of the most famous hall dances of post-Renaissance Europe, enabling dancers to arrive to social gathering without the dancing partner and to enjoy dance routine that involves two long lines of male and female dancers, who move up the line during the dance and eventually coming in contact with all participants of the dance. This dance was very popular in England, Scotland, and France, and eventually arrived in the United States where it became not only popular but also morphed into a dance that is today regarded by most as ‘American dance.’”

When the necessary number of males to female partners is not even, red ribbons indicate a gender. Couples who attend a contra dance must be prepared to dance with “neighbors” as well.

Sarah Harkins, who has recently gotten involved in contra dancing, has a background in international folk dancing. “Contra dancing is at least 10 times easier than Scottish country dancing,” she said. “I like to dance, and this kind of dancing is fun and social.”

A necessary aspect of contra dancing is the music, and, some people who attend contra dancing do so just to listen to the music, instead of to dance. The music is a bit of folk, Irish, and bluegrass. Blue Eye Girl includes a fiddle player, Pearl Shirley, from Black Mountain, bass player Laurel Willoughby, also from Black Mountain, and banjo player Annie-Fain Barralon, from Brasstown.

Patti Hubbs said she has been involved in not only dancing at contra dances, but also playing the piano. “It’s so important to have live music,” she said. “That’s part of the tradition.”

“The live music is very much part of the appeal,” added Harkins.

Chris Sobek is also a contra dancer; she has played bass at past Cowee School contra dances. She began participating in contra dancing 35 years ago. “It has just enough structure to make me feel comfortable dancing,” said Sobek. “It’s not too formal. Everyone just dances with everyone and has a whole lot of fun.”

Sobek said another contra dance will likely take place in early spring of 2020, with the venue again being Cowee School Arts and Heritage Center. The Cowee School website can be checked periodically to learn dates and times.