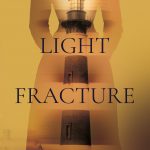 Few people realize that an 1886 earthquake that devastated Charleston, S.C., is the worst on record to ever affect the East Coast. Deena C. Bouknight’s historic literary novel, “Light Fracture,” is a well-researched, sense-of-place, post-Reconstruction tale that builds in and around a lighthouse culture to climax with a natural disaster involving strange phenomena before, during, and after an estimated magnitude-7 earthquake.

Though steeped in accurate history, the fictional tale focuses on Agnes Larsson’s plummet inside the Morris Island lighthouse during the earthquake’s aftershocks and explores whether her death was driven by mental illness or involved something sinister on the part of her lighthouse keeper husband or their children’s teacher.

“Light Fracture” illumines struggles meant to stay shrouded in a time when patience was a virtue, a lighthouse saved lives, and an earthquake was the furthest notion in the minds of those living in South Carolina’s lowcountry.

Books will be available for purchase and signing after the program.

Deena C. Bouknight, who resides in the Carolinas, is a career writer and journalist, having contributed for 30-plus years to local, regional, national, and international publications including The Macon County News. She has written three Southern fiction novels, “Broken Shells,” “Playing Guy,” and “Light Fracture.” She has also contributed to and ghost-written non-fiction books.

Library’s December art exhibit said to be a ‘luminous’ experience