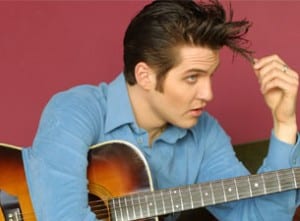 When he walks on stage, as soon as the lights hit him, Travis LeDoyt completely transforms himself from being one of five children born in Greenfield, Mass., to the King of Rock and Roll. LeDoyt embodies the character and during his show, “A Tribute to the King,” he  flawlessly captures the essence of Elvis in his prime, presenting the hits and the ambiance of 1954-1959 and on Friday, April 8, LeDoyt will be bringing his show to Franklin.

“Travis is one of the most awarded Elvis tribute performers in the world,” said Scott Corbin, director of the Smoky Mountain Center for the Performing Arts. “In the past, we have had artists perform as Elvis, but they usually represented the older Elvis. Travis focuses on the younger years, which I think will bring a whole new energy to the show. This evening of music is sure to the please the most die-hard Elvis fans to those younger audience members that might be familiar, but not as much as an expert on the life and music of the rock and roll legend.”

Deemed the “World’s Best Young Elvis” by The New York Times, LeDoyt looks like Elvis, sings like Elvis, moves like Elvis, and he shares the same personality and mannerisms both on and off stage as Elvis and after a decade performing tribute acts to the King,  LeDoyt says the transformation into one of the greatest artists to ever live has become second nature.

“There isn’t a big process to get into character anymore, not like there was when I first started a decade ago,”  LeDoyt said. “I don’t get nervous, I get excited and I learn to adapt when I walk on stage and become Elvis for the show. I am naturally a goofball, so it really helps give people who come to the show an authentic experience of how Elvis was in the ’50s and ’60s.”

LeDoyt’s shows are interactive, which a lot of time he says catches people off guard. “I love going into the audience and interacting with fans,” he said. “It’s their show and I want them to be a part of the entire experience.”

As a tribute act, LeDoyt said it’s important for him to not lose himself in the character. Performing shows across the country, including eight cruises a year, LeDoyt spends nearly as much time as Elvis as he does himself.

“Finding a balance and being able to leave the character on the state is important,” LeDoyt said. “It’s a job and an act and I have to make sure I don’t get too lost into the character. On an average day, I don’t think people could look at me and tell what I do for a living.”

LeDoyt was not an immediate fan of Elvis Presley, but as he got to know more about the man and his music, he came to understand why Elvis was dubbed, “The King of Rock & Roll.”  After listening to his father’s recordings by Elvis, LeDoyt was particularly impressed with Presley’s early recordings and bought that collection of hits.  He played the CDs constantly and began to sing along.  As LeDoyt matured, he found his voice and appearance were remarkably similar to Elvis.  He also found he had a natural ability to move like Elvis, and after his first performance in tribute to Presley, he found the public response to be overwhelming.

LeDoyt is based in Nasheville, Tenn., but does most of his performances in and around the Oklahoma area. The April show at the Smoky Mountain Center for the Performing Arts Center will be LeDoyt’s first trip to Western North Carolina.

“We are just breaking into North Carolina, so this will be my first time to that part of the state,” he said. “I am excited to be there and to continue working on building a following across the state.”

LeDoyt flawlessly captures the essence of Elvis in his prime, and restricts his shows to the hits and ambience of 1954-1964.  Utilizing a three-piece band featuring guitar, bass, and drums (augmented with backing tracks for songs that require extra orchestration), LeDoyt takes his audience back to the fun and excitement of an early 1960s Elvis concert.  For those who missed seeing an Elvis concert during those years, it is a chance to experience the excitement and aura of an Elvis show and the fun and energy experienced by the audiences.

“I like taking people back in time, even for a short while,” LeDoyt said. “Elvis’ music is timeless and it spans so many generations, the shows are a great family event. I love the music and that is why I got into this in the first place. I want to help people relive that time. There is no better compliment than when someone comes to the show with a friend without much of a preference on Elvis, and by the time they leave, they are a fan of the King.”

Tickets to see LeDoyt at the Smoky Mountain Center for the Performing Arts Friday, April 8 at 7:30 p.m. are $20, $25 and are available at the ticket box office or online at greatmountainmusic.com.