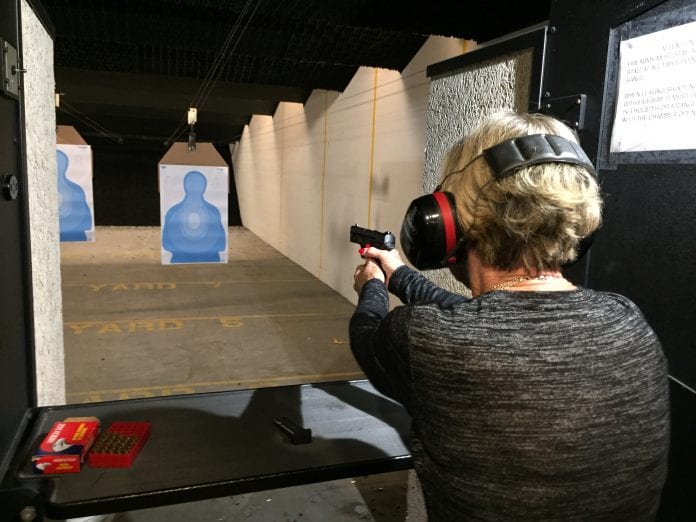 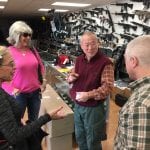 Barr had her left arm raised, her pink hoodie pulled halfway up her torso. Henry was underneath trying to figure out where to place a bra-concealed holster.

“It’s called ‘Flash! Bang!’” said Barr, pretending to quickly lift her hoodie with one hand, and grab a concealed weapon from her bra and fire with the other.

The widow of a Vietnam POW and the former domestic abuse survivor were enjoying another ladies day together at Jeff’s Ammo & Arms– $7 all day plus the cost of ammo– to fire off rounds at their would-be aggressors in Jeff Wang’s indoor shooting range.

Barr’s path to gun ownership began seven years ago when her ex-husband punched her in the face. Despite a restraining order, at 11 o’clock one night she could hear his mean, angry pounding on the opposite side of a door. She was scared. She put a butcher knife in the back of her sweatpants. The next day, her brother took her to purchase her first Smith & Wesson.

She later enrolled in Franklin Police Chief David Adams’s R.A.D. self-defense for women course. She started to build her confidence and began to feel safe.

Henry fired a gun for the first time in September. Her husband, celebrated Vietnam veteran and Prisoner of War Nathan B. Henry, died near three years ago and she’s lived alone ever since. About a year ago, she received a death threat that was captured on a surveillance video at an area convenience store. In early October, her husband’s gravesite was desecrated.

“That gravesite is so isolated, you could scream and no one would hear you,” she said. Now Henry only visits the Burningtown Baptist Church gravesite during Sunday mass when people are nearby.

“I’ve never been around guns,” said Henry. “My husband didn’t hunt, Vietnam stopped him from that.”

When Nat Henry was still alive, the Henrys kept their only gun in the utility room to prevent an accident.

“When he heard a noise in the night, he thought it was the Vietnamese. I was afraid he’d shoot me,” she said.

Now Henry keeps her gun down the hall in the living room, where she can retrieve it protected by walls on both sides and out of view of an intruder.

Wang opened Franklin’s only shooting range in September 2017 after a two-year battle with the Town Hall to get a downtown permit for an indoor shooting range. It is illegal to discharge a firearm downtown. Once he got the permit, he spent about eight months constructing the indoor range behind his ammo shop and next to his dry cleaners store on Carolina Mountain Drive. The facility is now a celebration of the second amendment from a man of Chinese descent who would never have had the right to own and fire a gun in his home country.

“I’m getting better,” said Barr, though she admits she’s far from her father’s ability, who was a Marine reconnaissance sniper in Korea and could shoot a penny out of her mother’s hand with a BB gun, or a cigarette out of her mouth, she remembers.

“I just want to be able to protect myself,” said Henry. “All women need to do this.”

Turning to the friend she met at the American Legion about six years ago, Henry said, “There are so many women like her. I don’t have a man and I travel a lot.”

Henry, 5’ 1”, is down to 87 pounds as of last week, that’s seven pounds less than when she first reported the gravestone incident.

“It’s the stress,” she said. “Until I catch him or fix the headstone. Now that I’m getting better at shooting, I can go to that cemetery and feel safe.

“I am not that same teeny woman who was threatened at a convenience store last year,” she said.

She showed off her concealed carry purse. She has one for summer and one for winter.

The two women lined up in side-by-side stalls at the gun range. Wang stood cross-armed at the back wall observing.

One by one, they pulled a lever that zooms a clamp along a cable to the edge of their stall. Each affixed a silhouette paper target and pulled the lever to return the target to the  desired distance. They carefully loaded their weapons and snuggly placed ear protection over their heads. Knees slightly bent … arms fully extended … one eye closed … aim… Bang! … Bang!

The two fired off a few more rounds and recalled their silhouette targets to compare.

“They don’t want to mess with us,” said Henry.

“It’s more fun to do it with somebody,” said Henry of visits to the shooting range. “She’s a domestic violence victim and I’m one little skinny woman. For $30 we can come here on a Wednesday and shoot.”

Barr echoed her. “You never, ever threaten somebody.”

“That’s why we are here. To perfect, to practice and to protect myself,” said Henry, who completed a gun safety class offered at Jeff’s this past September.

“I tried to get a job with the sheriff and he told me they weren’t hiring,” Henry said with a laugh. “He said, ‘Check with Chief Adams!’”

Twice a year, Chief Adams puts on a padded bodysuit and lets women beat up on him.

The Rape Aggression Defense (R.A.D.) certified instructor has been offering the free women’s self-defense courses since he started with the Franklin Police Department in 2013. Dozens of women ages 14 to over 70 have taken part. They learn to build their situational awareness, walk with confidence, and avoid and deter threats.

“It empowers them to be a better person and be more confident,” said Adams, who added that months and years later women have come up to him to tell him how the course changed their lives. Occasionally, some of those women will also take a gun safety class, get their concealed carry permit and practice shooting.

“A lot of the ladies I see that take the course, they take the course because they’ve never really had any training,” he said. “The majority are probably 45-plus years old.”

The Sheriff’s Office has processed 520 concealed carry permits so far this year, compared to 872 in 2017. The office does not break down statistics by male and female applicants.

Adams underscored that just having a gun isn’t enough, knowing how to use it is key.

“Having a gun and not being familiar with it or knowing how to use it is more dangerous,” he said, adding that the confidence gained by the gun owner may be a deterrent enough. “People aren’t going to attack you if they feel like you’ve already got your eyes on them.”

Wang said women visit his shop daily, and industry magazines have indicated the trend is nationwide. That’s why he offers concealed carry purses and an array of handguns in colors and styles designed to appeal to women.

“Those will all be gone by the holidays,” Wang said, pointing at about a dozen handbags. He’s already sold 50 since the start of the year. “Lots of people need a place to shoot and practice, and for education, like Becky.”

“I don’t have a husband now. I’ve got to protect myself,” said Henry. “This is something I’m adamant about.”

Mayor calls for ‘teeth’ to clean up derelict properties