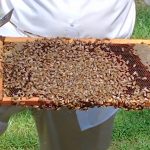 The Wheeler brothers, who hail from other parts of the United States but who currently live in Franklin, never imagined themselves involved in beekeeping. Scott Wheeler retired from a career at The Hershey Chocolate Company in Pennsylvania, while Mark Wheeler works part-time as an educator teaching life skills to disabled persons.

Life-long apiarist Dick Tracy has been keeping bees in one capacity or another – from a few hives to big-business beekeeping – since he was a 20-year-old. His fervor for keeping honey bees, and his extensive knowledge of the practice, became the impetus for the Wheelers’ enthusiasm.

“At one time I was managing 500 hives,” said Tracy, who moved to the area two years ago to be close to his mother, who was raised in Macon County.

Mark met Tracy a year or so ago through a church connection. Mark learned about Tracy’s his experience and his interest in bees and became intrigued. His interest in beekeeping piqued, Mark began researching and reading on his own. He decided to involve his brother, Scott, in establishing a hive.

As Tracy explained, the Wheelers have been “bit by the bee bug,” just like he was 50-plus years ago.

A pandemic year turned into a productive year for the Wheelers and Tracy. They decided that instead of having individual hives, they would pool their resources, time and sweat-equity and enter full-force into a beekeeping endeavor. In less than a year, the three men have acquired and manage more than 40 hives.

“Mark has become the ‘expert’ at making queens,” said Tracy. “He made 60 queens this year. We use some and sell some.”

Mark learned quickly that to “make” queen bees involves taking honey bee eggs and, instead of allowing them to lie horizontally, to gingerly turn them vertically. That simple act ensures that the egg will not hatch as a worker bee but as a queen bee.

“I’ve always been curious about bees,” said Scott. “Their complexities are so interesting. So beekeeping gives me an opportunity not only to know and understand, but to participate. I help wherever my brother and Dick need me.”

Scott puts on “whatever hat they tell me to wear,” he said. But mostly enjoys talking to people about the honey and has sold honey at community events.

Scott and Mark expressed that neither beekeeping, nor any other work- or hobby-related path, has been on their radar in the past, but, “We are hoping that beekeeping brings us even closer together through sharing a common goal,” said Scott.

The three men are finding that their conversations are always about bees.

“I just like their social structure, how they work together as a unit … as a community,” said Mark. “They have such skills. They dance when they let each other know they have found something, whether it’s nectar or pollen. And the queen … how she makes a test flight and then a navigational flight, and then a maiden flight … how she can lay 1,500-2,000 eggs within a 24 hour period. It just never stops being interesting. You can never know it all. It seems like we are always learning something new.”

Scott said he has learned that upwards of more than 100,000 bees can be living in one hive.

Importantly, the Wheelers know how to tell difference between a honey bee, crucial to the survival of flowers and crops due to wide-spread pollination, and yellow jackets, which also pollinate but mostly prey on such insects as grubs or scavenge for food. Honey bees are not as aggressive as yellow jackets.

Tracy is considered a full-fledged apiarist, the formal term for beekeeper, due to his decades of experience. Tracy said he is impressed with how quickly the Wheeler brothers have learned – and how willing they are to spend upwards of 50 to 60 hours a week beekeeping.

To accommodate growing the number of bee hives to around 80 next year, the Wheelers and Tracy have had to purchase much equipment. Extractors pull the honey from the comb, smokers calm the bees, and filtering and bottling tanks play a role, for example. Tracy has taught the Wheelers how to construct the hive boxes and lids as well as tackle numerous other tasks related to beekeeping.

While the beekeeping venture among the three men has only been on track for less than a year, honey production was at about 53 gallons for 2021. The honey is sold in 1-pound or 3-pound jars.

By 2022, Tracy and the beekeeping brothers expect to do more than just extract honey; they plan to offer assistance with education, gassing bees for mites, maintaining hives, providing queens and bees, and more.

Special Liberty Project happy to be relocated in Macon County