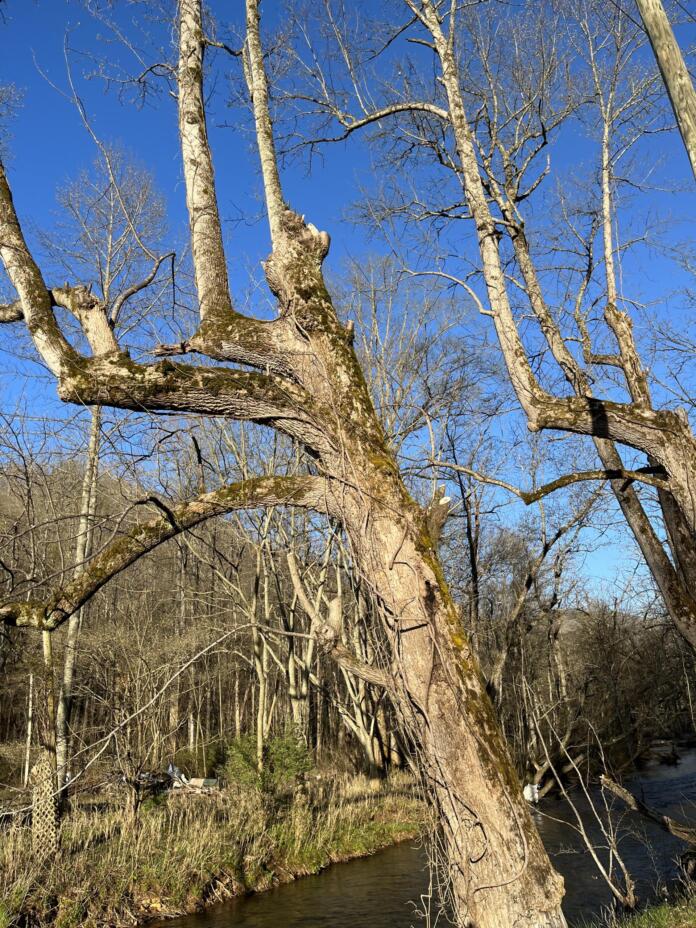 During a walk or hike on the many trails and paths throughout Macon County, sighting a tree with unnaturally bent limbs may cause one to pause. Yet, without realizing “trail trees” actually exist throughout the region, the curiosity could be passed by without much consideration.

Long before an expansive network of interstates and highways cut across America, trails were formed and traversed by the native peoples, such as the Cherokee, and used regularly for trading goods, hunting, and gathering, and to make war against opposing tribes or settlers and British forces.

In order to indicate direction and other noteworthy markers, the Cherokee manipulated the trunks and limbs of designated hardwood trees, often red and white oaks because of their longevity. Sometimes the trunk or limbs had to be tied and staked so that the tree would grow a certain way. Sometimes aspects of the tree were weighted down with a rock or a pile of dirt to achieve the growth distortion necessary to achieve an eventual distinction that would indicate direction. The methods used to shape trees were dependent on available natural resources as well as what the Cherokee intended the tree shape to signify.

After the sapling grew for a year or more, the tree could then be trained to grow upright by tying off the leader, which is the vertical stem at the top of the trunk.

Modern observers often find that determining the meanings of the trail trees is difficult, but native people clearly delineated the markings, some which pointed to settlements or burial sites, while most indicated general directions or pointed to water sources, river crossings, shelters and other destinations.

Some felled trail trees, when evaluated closely, show in their rings the general timeframe as to when they were bent and shaped before they became important age-old landmarks.

“A common mistake has been not coring trees to get age data to even know if the trees are old enough to be marker trees,” said Brent Martin, executive director of the Blue Ridge Bartram Trail Conservancy. “We have one at our [home] place, and there is the state champ White Oak in Tellico Valley; also the Padgett poplar in Highlands and a few others here and there.”

While some misshapen trees may simply be the result of age and wind, for example, there is a chance they are leftover symbols of a past trail system used by native people in the area for generations.