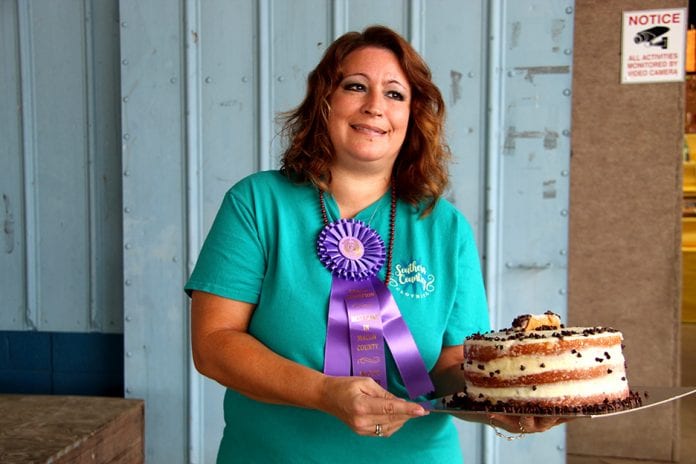 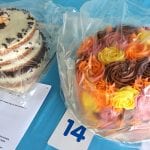 Bakers, bakers’ family members and friends, and curious fair-goers flocked to the Macon County Fair’s main building stage Saturday morning, September 14 to watch the judging for the Best Cake Contest. Gloria Thun, one of 20-plus Fair directors for the past several years, shared with attendees that four to six cake entrees used to be the norm, while this year’s Fair drew 14.

Thun is familiar to many residents of Franklin for her own culinary skills; she catered at Angel Medical Center in Franklin for many years.

Cakes were lined up on the stage with three contest judges presiding, including Ronnie Beale, Macon County commissioner – District 2. He pointed out that Thun was ideally suited to oversee the Best Cake contest. “Does she bake? Oh my gosh! What she makes, especially her sourdough bread – which she’s had the starter for for 30 years – is so so good!”

Judges first took the stage and judged each cellophane-wrapped cake per their “first impression.” After they returned to their judging table, they were given a thin slice of each cake and judged them further on “inside characteristics,” such as moistness, texture, etc.; “flavor,” which included smell; and, “recipe originality” (i.e. creativity of ingredients).

As judges tasted and evaluated each cake, Thun read the main ingredients of the cakes. Only a sliver was removed in a way to not damage the cake, as each cake was auctioned off after the contest to interested Fair participants.

Cakes ranged from the simplistic and common to the distinct. My Favorite Coconut Cake, Sinful Chocolate Cake, and German Chocolate Cake were familiar favorites. Several cakes focused on an autumn theme and included such seasonal ingredients as apples, pears and pumpkin, as well as complementary spices. A few of the more unique cakes were Toffee Angel Food Cake, Triple Berry Cake, and Cannoli Cake. The latter was the winner, but not by much. Several of the cakes received close scores.