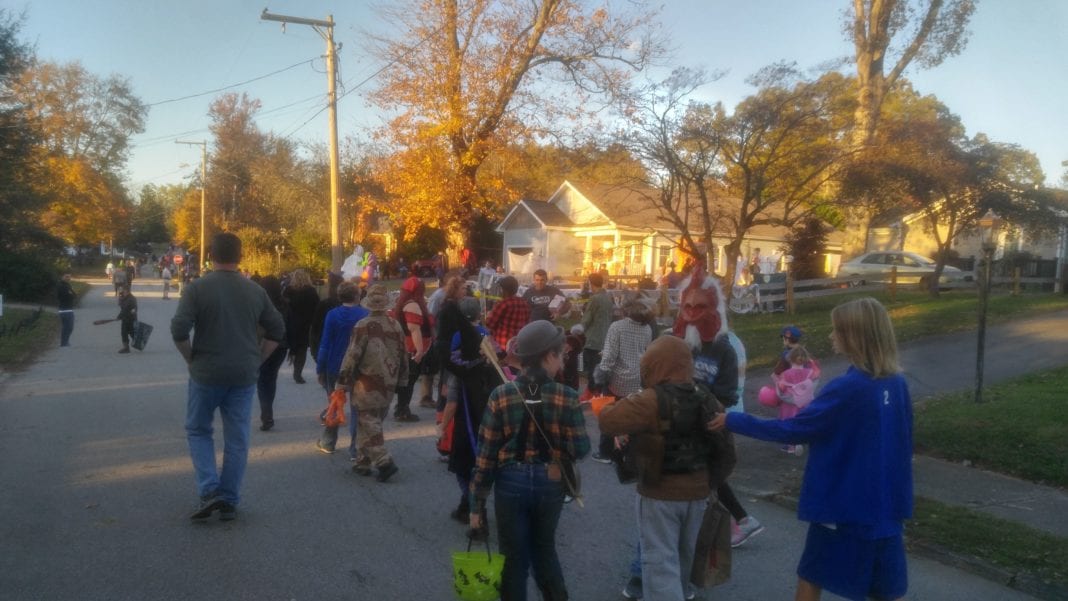 Each year, thousands of people flock to Bidwell Street and adjoining streets in Franklin for traditional door-to-door trick or treating. The residents on these streets don’t just merely turn on their porch light on Halloween night for a few hours and give out candy, but from the very beginning of October, Bidwell Street transforms into a Halloween town, and has been a trick or treating destination for surrounding towns for decades. Houses on the street this year had themes of theatrical proportion such as scenes from the move IT and Ghostbusters. Others featured an interactive walk thru graveyard and other impressive decorations.

With stories dating back 60 years, local residents remember going door-to-door on Halloween night up Bidwell Street. Over the years, dozens of houses have signed on for the holiday, transforming their front lawns into graveyards and spooktacular attractions for little ghosts and ghouls to enjoy.

The Halloween tradition of Bidwell isn’t a new one. Franklin resident Pam Crawford remembers trick or treating on the street 58 years ago.

“I moved into a house that was where the Penland Building is now when I was 11 years old,” said Pam. “I was new in Franklin Elementary School but made friends fairly quickly. We loved Halloween. It seemed as though every house was decorated for the holidays. It was like it was a town in itself. We would get so much candy we would still be eating it for Valentine’s Day. As I grew older in my early teens we moved away from Bidwell Street but I continued to go there on Halloween night to trick or treat and be with my friends. Such fond memories of the wonderful people there on that street. The Cabes, the Evitts and the Palmers just to name a few that I remember. And at the end of the night our friend Abby Winstead would take us to his aunt’s house for hot chocolate. She lived in the white house across from Bryant Funeral Home where the Alton Sutton Family lives today. She was a dear lady and I was fortunate to have known her then and all through my adult life. My friends and I loved to have fun and Bidwell Street was the place to go! After all these years it’s nice to think about all the good times we had on that street and to know that kids are still going there and enjoying the same things I did so many years ago.”

Stacy Tyson said she remembers her first experiences trick or treating on Bidwell 33 years ago.

“I did trick or treat on Bidwell from around 1984-1990,” said Stacy. “We would meet friends (Tom and Becky Harris) at their house on Bidwell. I remember one house that always gave out half a pack of little Debbie cakes. Not sure why that one stuck in my head other than our parents knew even unwrapped they were safe.”

Living on Bidwell for several years, I was privileged to be able to open my doors for Halloween and there is just nothing like it. Despite neighbors warning us to be “prepared” for the experience, there really isn’t much a newcomer can do to prepare other than hope for the best. It takes years to fully master Halloween on Bidwell and the thousands — you read that right — thousands of children who come knocking before the sun ever sets.

It isn’t cheap being a Bidwell resident on Halloween. You don’t want to give out the bad candy, so you spring for the good stuff. And buying enough candy for the couple thousand kids who will inevitably knock on your door starts to add up. Most residents begin preparing months in advance, buying up bulk candy and stashing it away. The Pippio family, who are seasoned vets of Bidwell trick or treating were the first to warn me about being prepared for the holiday. In addition to some of the most ghoulish Halloween decorations on the street and costumes to boot, the family has a counter each year that never ends before hitting the thousands. This year, The Pippios reported having 7,500 pieces of candy ready for trick or treaters and even that impressive bounty likely wouldn’t last the hordes of people who came knockin’. Pippio reported on Facebook Wednesday morning that her house counted 1,886 trick or treaters, which doesn’t include the grandparents, parents, aunts and uncles who accompanied the little ghosts and ghouls.

The community reached out to the Macon County News in September asking if the newspaper could be a central drop-off location for members of the community to donate candy to help the residents on Bidwell Street. Knowing how many kids flock to the street, and not getting trick or treaters themselves, donations poured in all month. Nearly 10,000 pieces of candy were donated by the community, all to help complete strangers provide Halloween to children. A lady who lives in Sylva sent a large bag in to donate because she remembered growing up on Bidwell and missed the tradition. Another lady from California made a donation because she wasn’t lucky enough to get any trick or treaters and wanted to help those who did. Watching people bring in bag after bag was truly inspiring. Complete strangers, many of whom don’t have kids and just wanted to do a little something to help. That’s the beauty of living in such a wonderful small town. The adage “It takes a village to raise a child” once again stands true for Macon County — this time, it just takes a village to provide Halloween!”

Locals at the ready for disaster relief

For more than 40 years, Macon County’s very own Santa has...