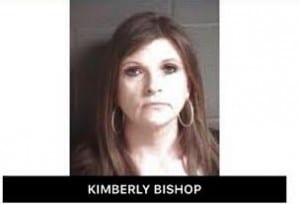 Former Macon County Board of Elections Director Kim Bishop found herself back in front of judge on Friday in Buncombe County after having her bond revoked last Monday.

Bishop turned herself into federal court on Monday, Feb. 1, at which point she entered a guilty plea. The federal charges against Bishop state: From in or about June 2013 until January 2014, Bishop, being an agent of local government, in a continuous one-year period received benefits in excess of $10,000 under a federal program involving a grant, contract, loan, guarantee, insurance, and other form of Federal assistance, did embezzle, steal, and obtain by fraud, and did without authority knowingly convert to the use of a person not the rightful owner, property, that is money, worth at least $5,000 and under the care, custody, and control of such local government.

After Bishop pled guilty in federal court, she was released on an unsecured $25,000 bond. On Friday Feb. 5, Bishop was ordered a status conference as part of her conditions of release while awaiting sentencing. During the status conference, Bishop failed a drug test at which point United States Magistrate Judge Dennis Howell vacated Bishop’s guilty plea and revoked her bond.

Bishop was ordered into federal custody until last Friday, when she once again appeared in court for a second plea hearing. Bishop was able to once again plea guilty to the charges and was released on an unsecured $25,000 bond until sentencing. According to the United States Clerk of Courts Office, Bishop will be sentenced in the coming weeks.

The basis of facts in the case report that from 2002 through January 2014 Bishop served as the director of the Macon County Board of Elections and had authority to initiate check requests in order to disburse funds from the BOE expense budget. Beginning in June 2013, and until January 2014, Bishop submitted check request forms in order to cause checks to be issued by the Macon County government payable to four people, supposedly to pay them for their work on behalf of the BOE.

At Bishop’s request, the county issued the checks. The people who received the checks had not been authorized by the BOE to work and were not BOE workers or on the county payroll. At least one of the four people was not aware that the checks were even being issued in her name. The four people named in the initial investigation and search warrant issued by the State Bureau of Investigations were Sonya Stevens, Misty Henry or Misty Bryson, Kathy Holland, and Cassidy Ledford.

Based on court documents, in order to cash the checks, on some occasions the defendant would forge the endorsement signature of the payee and sign her own name on the back of the checks, then cash them at local financial institutions. On other occasions, at least two of the named payees would sign their names as endorsers, cash the checks, and then split the proceeds with Bishop.

In total, the checks issued to the four people and paid out by Macon County were approximately $72,000.