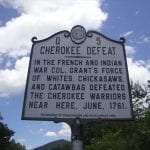 Historian and conservationist Lamar Marshall offered this information and much more in his June 17th presentation at Cowee School Arts & Heritage Center “Where We Live: History, Nature, and Culture.” Marshall discussed the warring that took place in 18th century Western North Carolina between the Cherokee – motivated to defend ancestral lands and a way of life – and the authorities, first the British and eventually the United States government.

Founder of Wild Alabama (now Wild South), Marshall has been enamored with the outdoors all his life, and an interest in the Eastern Band of the Cherokee led him to become involved in the Cherokee Preservation Foundation. He helped gather countless journals, maps, records, etc. and established the Southeast Heritage website as an avenue to understand Cherokee history.

“Most people have no idea of the rich history that took place here,” said Marshall. “Those involved in the Revolutionary War came down the river [Little Tennessee] right in front of the [Cowee] school. And, as early as 1725, there were expeditions coming into this area. Buffalo and elk were once all over this area.”

But perhaps no history has more significance than the plight of Cherokee people. In 1738,  half of Cherokee people residing in and around Macon County succumbed to smallpox, a disease introduced to the Native Indians by European explorers and settlers.

Marshall shared with the packed house at the Cowee School that before an influx of outsiders came through the “gaps” in the mountains, Cherokee tribes were self sufficient. However, when introduced to iron, brass, beads, and especially firearms, the region’s culture and dynamics changed. “There was an all-out arms race because all Native Indians wanted the firearms,” said Marshall.

From 1756 to 1763, the French and Indian War involved primarily the French and British battling for North America. Various Native Indian tribes were allies with different forces; Cherokee sided with the British, who ultimately became their enemy in battle.

“The Native Indians were not alone in their savagery,” pointed out Marshall. “The British could be brutal as well.”

A narrative accompanying historical marker Q5 titled “Cherokee Defeat” at US 23/441 at Norton in Macon County shares a scenario that sparked fighting and distrust that would continue for several years:

“On June 27, 1760, Chief Occonostota, leading a band of Cherokee warriors, attacked British forces near what’s now Franklin in Macon County, pushing them back into South Carolina.

When the French and Indian War broke out in 1754, the Cherokee allied with the British against the French. However, by 1758, relations between the Cherokee and British had soured. A dispute that year over stolen horses touched off an escalation of hostilities between the two groups, culminating with the British murder of several chiefs who had traveled to Charleston to negotiate peace in 1759.

Following the deaths of the would-be peacemakers, the Cherokee tribes united in their efforts to resist the British in the Carolinas. As part of their strategy, they laid siege to Fort Loudon in eastern Tennessee. Col. Archibald Montgomery and his men responded by burning the Cherokee villages along the trading path near the Keowee and Oconee Rivers.

As a result of this victory, Fort Loudon was surrendered to the Cherokee the following month. The Anglo-Cherokee War would last until 1762, when the two nations came to an uneasy peace.”

In that era, the Cherokee tradition of “blood law” is why the Native Indians retaliated initially. However, what followed this incident was an influx of hundreds of English and Scottish military marching into Macon County via what is now know as Hwy 441 through Rabun Gap and into Otto, where they encountered a Cherokee ambush. When the British in then Charles Town (now Charleston), S.C., learned of how badly their forces were beaten by Cherokee, they retaliated by sending more forces, according to Marshall.

What began is considered, historically, as the Rutherford Campaign or the Rutherford-Williamson Campaign, headed by Brig. Gen. Griffith Rutherford and Col. Andrew Williamson. These leaders, explained Marshall, conveyed a map that sectioned off Western North Carolina based on where the Cherokee lived so they could plan strategies for attack.

For the next many months – into years – military forces burned countless homes and villages and destroyed thousands of acres of crops, mostly corn. While Marshall pointed out that Cherokee were strong, agile, and elusive and were mostly able to hide in the mountains, the infirmed and elderly left behind in villages when soldiers invaded were killed. One winter, Cherokee survivors were forced to slaughter and eat their horses because the soldiers had destroyed all the food they would normally have preserved as sustenance during the colder months.

In a quote from a letter Marshall shared in his presentation, Gen. Rutherford elaborates on his desire to destroy all Cherokee people.

Marshall said many of the paths and “roads” used by Cherokee and the invading military still exist in and around Macon County, while much has also been covered by modern roads and highways.

Treaties were eventually signed in the early 1800s, but the bloody business continued with the destruction of Cherokee property,  land grabs, and ultimately the Indian Removal Act and the Trail of Tears.

CareNet partners with Free Little Pantry to feed the...