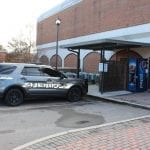 After Kaityln Fitzgibbons was given an active sentence in front of Superior Court Judge Bill Coward in Macon County, before being loaded on the detention center transport van, she was able to escape from a female detention officer and spent nearly 24 hours as a fugitive. Fitzgibbons was swiftly apprehended and received additional felony charges for the escape. After the incident, the urgency grew to further address the security of the Macon County Courthouse and a need for a “sally port” entrance for inmates.

“Since we first started looking at courthouse security, the first recommendation anyone has made is that we needed a sally port,” said Sheriff Robert Holland. “It has always been on the top of our priority list. Knowing the Space Needs Analysis was being conducted, we elected to hold off on the construction while we waited for the outcome of that study. However, with the recent incident, it’s not something that can wait any longer.” 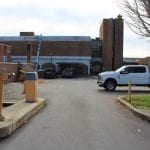 Sheriff Holland said that since Fitzgibbons’ escape, the detention center has transported more than 100 inmates to and from the courthouse, all of which used the same entrance and exit Fitzgibbons took advantage of during her escape. He said if the county waits until the budget planning process, the sheriff’s office estimates 600 inmates will have been transported, each of which could be an opportunity for another escape attempt.

“Now that one inmate was able to do it, it is more likely that others may try the same thing,” said Sheriff Holland. “We are also extremely lucky that we haven’t had a more serious incident behind the courthouse. We transport inmates awaiting trial for murder, for child sex crimes, and other heinous crimes. It’s a miracle a friend of family member of a victim hasn’t been out back waiting for one of them to enter this courthouse.”

Sheriff Holland informed commissioners that he received bids from five companies to construct a sally port behind the courthouse which ranged from $37,000 to close to $60,000. Sheriff Holland recommended the county award the bid to the lowest bidder, which was Franklin Fence. For just under $38,000 before taxes, Franklin Fence will construct a fence throughout the entirety of the parking lot adjacent to the courthouse. It will have a secured chainlink fence perimeter and door-only accessible by approved individuals.

The fence will be black chainlink, which is required based on the town’s building codes. A wood fence was considered for aesthetic purposes, but it would be more difficult to construct and be able to meet the guidelines specified by the town.

Sheriff Holland said that in the event that commissioners decide to construct a new jail or justice center down the road, which is recommended in the space needs analysis, the fencing could be preserved and moved easily.

On a motion made by Commissioner Gary Shields and seconded by Commissioner Paul Higdon, the board voted to approve the funding for immediate construction of the fencing. The project will be funded out of the county’s fund balance as a one-time expenditure. Construction is expected to start immediately and be completed in about two weeks.