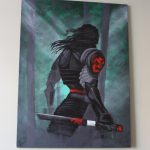 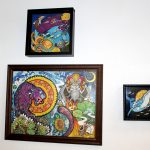 Downs has been a tattoo artist for seven years. She owns Atomic Annie’s on Main Street in Franklin. “I do the most in that arena …. every day. But I also commission paintings. If someone wants art on their car, I’ll design that. There’s no turning it off. I sew as well. As long as it’s hands on and visual, I’m doing it.” 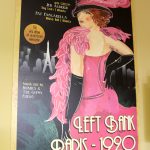 Downs even makes some of her Christmas presents each year. This past Christmas she created paper shadow-box butterflies. “People expect something artistic from me for the holidays,” she said.

Downs’ Main Street studio, named because her middle name is Ann, “and I wanted something fun … a throwback to the ’50s,” is filled with examples of her work – including framed illustrations 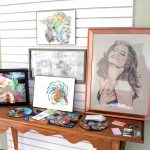 from the two children’s books.

“I do everything. I can pinstripe to tattoo art to acrylic paintings to portraits. Trying to survive as an artist, you have to be good at everything. I think of my studio as an art piece … whatever canvas you want is up to you. The body can be one type of canvas.

“A lot of people are artists. Some are focused. I’m just very broad.” 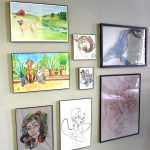 “And I just learned from other artists along the way to increase my skill set.”

Another aspect of her artistry involves hand-drawn art images for such clients as Zippo Lighters; some of her freelance commercial art has received accolades and top-seller status.

Beginning at age four, Downs was studying and copying drawings in encyclopedias.

“I paid attention to the wrinkles of the elephants in the book, for example. As soon as someone handed me paper, I was off and drawing. I’ve been sculpting, painting, drawing, and more ever since. I’ve lived here my whole life, and my career as an artist is partly because of the Macon County School System. I took all the art classes offered.”

For the “How I Became the Mighty Atlas” project, she was contacted by Michelle Masta early in 2020 and asked to illustrate Masta’s daughter’s story about her service dog, Atlas, an Anatolian shepherd.

“I have a soft spot for children with special needs,” said Downs. “I spent time with Atlas to get to know his personality, his movements. I actually became friends with Michelle and Kristina. It took about eight months to complete the illustrations. They are all hand-painted in watercolor. I’m really happy with the way they turned out … the way the book turned out.”

Downs also enjoyed the process of illustrating “Elder Turtle,” which is written in the Cherokee language and in English. “It was a big project for me and I was thrilled to be a part of that.”

Downs also offers children’s art education classes. “I try to do them affordably, for as little as $10, just to cover supplies. I really enjoy inspiring kids to focus on art.”