The building at 60 East Main Street in Franklin has housed hardware and general stores in its century-plus history. But since the 1980s, it has been home to a bookseller, most recently Suzanne Harouff, who was the owner of Books Unlimited since the 1990s.

When Harouff determined she would retire, discussions ensued with another more recent-to-the-area bookseller, Liz DeWandeler, who purchased Millie’s on Georgia Road in 2019. DeWandeler, a career veterinarian who moved to the Franklin area five years ago from Colorado, explained that she was always a bookworm and decided owning a book store was her new career. She had changed the

name of Millie’s to A Novel Escape and sold new and used books.

“I no longer wanted to be a vet,” she said, “so this was a natural fit for me. When Suzanne and I began talking, the most important thing to us was that Main Street not lose a book store.”

In the last few decades nationwide, independent booksellers have increasingly been lost to national chains and online sales. 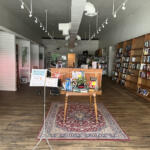 “I talked it over with my husband and felt it was a dream come true,” said DeWandeler, who purchased all the inventory of Books Unlimited. She closed the store for two months, had the carpet pulled up to reveal the original wood floors, pulled away the drop ceiling to expose the original ceiling, and opened up and redecorated spaces. A friend and carpenter, Bob Nichols, used existing wood to build a large U-shaped counter-cashier space, and the extensive, combined book inventory is housed on wall shelving and bookcases throughout. 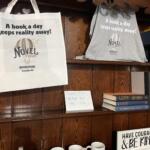 “I had a fantastic contractor, Hand Built Dreams [in Franklin], who took my vision for the store and accomplished the renovation,” said DeWandeler, “and then there were a lot of volunteers who helped. A good friend, who also does interior design, Logan Kimsey, helped me flesh out the vision and create a wonderful space and atmosphere.”

maintains its historic appeal, yet she desired that its interior also convey a somewhat modernized but inviting ambiance. Offered are sitting areas with antiques and repurposed furnishings, a Keurig coffee maker with a donation jar, and merchandise sporting the store name that she carried over from her Georgia Road location, A Novel Escape, which has been closed so she can concentrate on the Main Street store.

“I’m especially proud of how the children’s area turned out,” she said. “The children have lots of space in an area with so much natural light. I plan to have story times and other activities for them.” 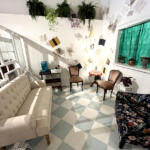 Offered at the new/old store is a selection of approximately 60% used and 40% new books. Plus, maps, puzzles, calendars, greeting cards, postcards, and more are available. DeWandeler, who reads all genres but especially enjoys apocalyptic and dystopian type novels and anything escapism-related, pointed out that she will order from other booksellers around the country if necessary.

“I’m a big proponent of shopping small, individually owned businesses instead of the large online companies,” she said. “And this store is still serving Suzanne’s (Books Unlimited) long-time customer base as well as new customers, who are local, seasonal, and tourists.”

She admitted that she is having “a lot of fun” and will soon reveal a “secret” announcement surrounding a grand opening event. She wants to maintain A Novel Escape as a quality book store, but always consider adding interesting items “here and there” as well as supporting local authors and local interests.

While a fixture at Harouff’s Books Unlimited was, for many years, a cat or two, A Novel Escape’s mascot is “Brody,” a golden retriever.

Beginning August 2 is the launch of the store’s book club. Anyone interested can read the August selection of “The Paris Architect” and participate in the book club’s discussion. On alternating months, readers will share through a round-table discussion format their insights regarding what they are reading currently. Book club meetings will take place the first Tuesday of each month at A Novel Escape at 6:30 p.m.

To keep up with upcoming events, activities, and offerings, anyone can sign up for A Novel Escape’s e-newsletter on the store’s website.