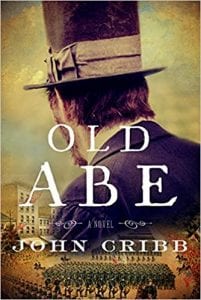 Author John Cribb told a small audience – due to COVID-19 – Sept. 4 at Hudson Library in Highlands that his Sept. 15-release historical novel, “Old Abe,” was “born in a library.” Formerly with the Department of Justice, the Department of Education, and the National Endowment for the Humanities, Cribb is a history buff who has written nonfiction books. “Old Abe” is his first novel, but it sprang from his meticulous and detailed research of the famous president.

While countless books have been written about President Abraham Lincoln, who came from a humble beginning, steered the country through a devastating Civil War, and then lost his life at age 56 to an assassin’s bullet, Cribb wanted to focus on Lincoln’s unexpected entrance into the highest position in the nation, as well as his character.

“I want people not only to know about him, but know him – now more than ever,” said Cribb. “We are in the throes of an election season at a critical time, but there was another election season 160 years ago that was significant.”

Through “Old Abe,” which begins on May 9, 1860, when a resolution was passed that Lincoln become the Republican Party of Illinois’ choice for the president of the United States, Cribb’s desire is that people understand that the political process more than a century and a half ago involved people talking, debating, and swapping news. Lincoln was not only self-taught regarding basic education, but he rose from a poor, simple upbringing in a log cabin to self-study law, pass the bar, practice law in his own firm, and enter state politics at the age of 23.

Lincoln’s Whig Party collapsed, in part due to the controversy surrounding the Kansas-Nebraska Act, which opened up new territories in the U.S. and the possibility of pro- and anti-slavery laws in those new territories. As a result, Lincoln became a Republican because he believed people should be free, pointed out Cribb. The Democratic party of the 19th century upheld the institution of enslaving individuals.

“Many people don’t realize that the Republican party was founded to combat the evils of slavery,”  Cribb explained.

And though Americans today often equate crassness and belligerence with modern politics, the party opposing Lincoln hurled insults via campaign posters and in newspapers.

“They called him ‘Old Ape,’ insinuated he was a mulatto and thus was not fit to be the leader of the United States, and referred to him as a country bumpkin,” said Cribb.

However, as is the case today with the attention and focus given to presidents, many other people considered Lincoln a “star,” said Cribb, “due to his oration skills, his height, his character, and his presence.” In fact, as he got onto the train in Springfield, Ill., to leave for Washington, D.C., at least 1,000 people showed up to “see him off,” said Cribb.

“Lincoln did not get a single vote in the lower South,” said Cribb, “because they took his name off the ballot. And, the death threats started right away … letters with drawings of knives and guns or a noose around his neck.”

Lincoln was elected as the first Republican president on Nov. 6, 1860, and “immediately faces the greatest crisis of the United States,” said Cribb. “He campaigned on the promise, ‘The Union Must and Shall be Preserved,’ so right away the Southern Democrats, many who were slave holders, were alarmed.”

A little over a month after Lincoln was elected, on Dec. 20, 1860, South Carolina became the first slave state in the South to declare that it had seceded from the United States.

“Lincoln was not just a stiff person in a history book,” said Cribb, who portrays him as playing handball with friends, draping his long legs over the end of a sofa, and sprawling on the grass in a patch of woods. “My hope with ‘Old Abe’ is to bring him alive … to understand the extreme service he provided to this country, which primarily was to safeguard the founding principles and to free enslaved people.”

Cribb added, “Lincoln’s touchstone was the Declaration of Independence, that everyone has a right to life, liberty, and the pursuit of happiness … that these principles protect, no matter what’s happening. That’s why he’s so timeless and relevant even for today, because he embodied many traditional American ideals of freedom and equality.”

“Old Abe,” published by Republic Book Publishers, is expected to be available by month’s end at various local bookstores, such as Books Unlimited on Main Street in Franklin and at Shakespeare and Company in Highlands.