Most Macon County locals are aware of 18th century naturalist William Bartram, whose name is attached to the 115-mile trail that stretches from the North Georgia mountains into North Carolina. The route follows Bartram’s southern exploration journey from March 1773 to January 1777, during which time he gathered, drew, and noted much flora and fauna along the way. His 1791 published book, known today as “Bartram’s Travels” – but which had a much longer original title – is still published and widely read.

Because the Western North Carolina Mountains are replete with thousands of species of plants, the area has drawn botanists through the ages. Two were famous enough to receive historical markers. One came to the area in the 18th century and the other in the 19th century.

André Michaux, also written as Andrew Michaud, was a French botanist and explorer. He was born in 1746 and died in 1802. He is famous for his extensive study of North American flora. So much of the region was unexplored in the 18th century that naturalists such as Michaux were intrigued, according to the North Carolina Historical Marker Program. Although the primary interest was identifying an adequate supply of quality timber for shipbuilding, French King Louis XVI appointed André Michaux as Royal Botanist and sent him to America under the guise of investigating plants that might be of value.

He arrived in New York in November 1785, after the Revolutionary War, established a garden in New Jersey and another in Charleston, S.C., and then headed to other areas of the United States, including Western North Carolina. He had two Cherokee guides and an interpreter, and he spent much time in Highlands, Cashiers, and other areas.

During his travels, Michaux discovered Shortia galacifolia, and for the next hundred years, he was the only botanist to have seen the rare plant. Plants such as the Carolina lily (Lilium michauxii), Michaux’s Saxifrage (Saxifraga michauxii), and others are named for him. His writings and studies on the plants and trees of North America continue to be botanical references for modern botanists.

The historical marker location is US 64/NC 28 (West Main Street) in Highlands and reads: “French botanist. First visit to North Carolina to study flora was June 1787, when he traversed the Highlands Plateau.”

Three quarters of a century later, another botanist, Thomas Grant Harbison (born in 1862 and died in 1936) had studied the flora of his native Pennsylvania, but he decided in 1886 to set out on a walking trip to North Carolina. He planted roots in Highlands, and in 1897 George W. Vanderbilt employed Harbison as collector of plants for a herbarium at Biltmore Estate. It was a post he held until the herbarium closed in 1903.

Harbison published the findings of his vast collection and research. When Vanderbilt died, his widow, Edith, donated Harbison’s plant collection to the National Herbarium in Washington, D.C. Then, in 1905, Harbison began two decades of work for Harvard University as a field botanist for Arnold Arboretum. He traveled extensively between 1905 and 1926, preparing a manual on trees.

In addition, Harbison was a consultant to the federal government on national forests, a promoter of the Great Smoky Mountains National Park, and a landscape architect. He had a farm in Highlands, where he hosted field experiments with apples and other crops. Plus, he taught.

In 1933 he laid the groundwork for an herbarium at the University of North Carolina, and the following year, he was named curator of the herbarium and kept the position until his death. He is buried in Highlands. 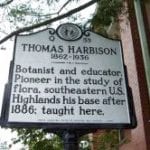 Harbison’s marker is located at US 64 (North Fourth Street) in Highlands. The marker reads: “Botanist and educator. Pioneer in the study of flora, southeastern U.S. Highlands his base after 1886; taught here.”

Today, botany specialists give free-to-the-public talks at Western North Carolina libraries and community centers. A Western Carolina Botanical Club’s (https://wcbotanicalclub.org/) mission is  “… to identify and study native plants and their habitats and to advocate the protection of biodiversity in our natural world.” The group’s main activities include weekly field trips (twice-weekly in April and May), informative indoor winter programs and occasional overnight trips to significant botanical areas, and workshops. The club also organizes community service projects and maintains a database of Southern Appalachian biota.

Also, just an hour away is The Botanical Gardens at Asheville, a facility with a schedule of lectures, events, and classes focusing on the area’s native plants.

But there are also notable contemporary botanists whose life work may or may not one day warrant a historical marker. Dan Pittillo is one of those. Residing in Sylva, Pittillo grew up in Henderson County where his family farmed. He was fascinated with plants at an early age, even participating in high school in a UNC Chapel Hill lab and plant sample collecting project that eventually resulted in “The Manual of the Vascular Flora of the Carolinas.”

Pittillo, now 80, shared how one of the professors involved with the project later sent him a thank you in the form of a different book, “Gray’s Manual of Botany,” that he inscribed to Pittillo as “future botanist.”

He married a botanist, Jean, who died in 2011, and he spent his career as a professor at Western Carolina University – from 1966 until his retirement in 2005 – teaching botany, plant ecology, and a natural history of the Southern Appalachia.

Still today, his goal is to be in the field.

“I’m always looking for new plants,” he said, explaining that he has been working on a book of his findings and observations that he hopes will be out no later than 2021. “I just love to get out and see what I can find, and I’m always seeing new species that I haven’t seen before.”

Pittillo continues to lead field trips for botanists and botany enthusiasts through the Southern Appalachian Plant Society and the Bartram Trail Society, which he helped found in 1977.

Unrelated health issues may be resolved by a trip to...