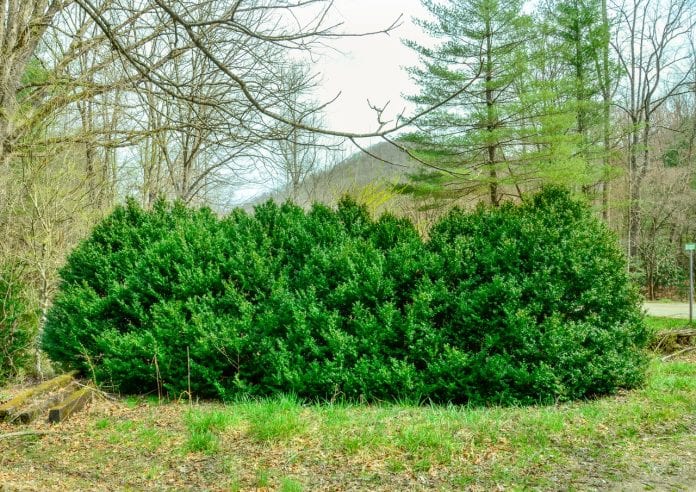 World-wide, the plant grown longer than any other in recorded history is boxwood.  Fossil records date it to before biblical times. It was one of the first and most popular cultivated plant grown in U.S. colonial times brought here by immigrants from their home countries.  It was used then and now to frame gardens beds, pathways and is excellent material for ornamentation such as topiary and bonsai.  It has been referred to as the “aristocrat’of all plants. Its dense heavy wood suits it well for ornamental carving and furniture making.  Chess sets were often made from boxwood.

There basically are four types of boxwoods commonly available today American, English, Korean and Japanese and many cultivars created by crossing the various species.

American Boxwood or Common Box is Buxus sempervirens.  Sempervirens is from Latin meaning always alive or evergreen.  This plant is a fast-upright grower reaching up to 15-20 feet.  One way you can spot an old or abandoned homesite is by the presence of a very tall old American boxwoods growing surrounded by jonquils.  It has elliptical or oval leaves ½” to 1” long.  The shrub has a broad rounded outline.   There are dozens of cultivars too many to mention.  It originated from southern Europe, northern Africa and western Asia.  I am not sure why it is called American except that it is now widely grown here.  Unfortunately, there are a number of diseases that affect this plant as well as the fairly common boxwood leaf miner insect.

It roots easily from cuttings.  This shrub blooms in April and May with very small inconspicuous blooms.  It is easily grown but prefers a slightly basic soil with a pH of 6.

English Boxwood is Buxus sempervirens “Suffruticosa.”  Suffruticosa means woody at the base, perennial and herbaceous at the top, a woody perennial. This was found as a seedling grown from the Common Boxwood.  It is often called the Edging Box as it is very slow growing.  Left unpruned it will only grow to 4-5 feet in many many years.  Thus, this is the ideal plant for low border edging as it requires little pruning or no shearing.  It was first cultivated in the 1700s.  Its growth is dense with smaller rounded leaves.

Korean Boxwood Buxus sinica. Sinica means associated with China. This boxwood is also evergreen.  Its growth habit is more open.  It has distinctive oval leaves that tend to turn yellowish brown in the winter.  It is more cold hardy than the others.  It has been used for crosses with the Common Box producing some very desirable selections.

Japanese Boxwood Buxus microphylla or Little Leaf Boxwood.  This evergreen was first introduced to the US in 1890 and has become popular ever since.  It tends to grow only to 4 feet tall and 4 feet wide with tiny leaves.  This is another great edging plant.  It is also the parent of a number of interesting cultivars.  I have become very fond of one of its cultivars ‘Kingsville Dwarf’’.  This is a selection from a sport (branch variation) from the cultivar Buxus microphylla ‘Compacta’.  Kingsville has tiny leaves.  Sometimes it is called Buxus microphylla ‘Japonica’.  It was first used for bonsai purposes in a nursery in Kingsville Maryland and has been popular ever since.  For a small plant it has the ponderous name of Buxus microphylla compacta “Kingsville Dwarf.”

There are some people who do not like boxwoods with the following objections:

1. Diseases and insects such as leaf miners, mites, root rot, a serious fungus disease and nematodes all requiring regular attention.

2. If you are looking for a plant with similar structure and stature consider dwarf Yaupon Holly and Helleri Holly both are easier to grow and manage.

3. It is somewhat difficult to keep all the species and cultivar names straight.

4. Constant shearing produces large knots (like what happens to Crepe Myrtles –  Crepe murder) that can only be avoided by the tedious and time-consuming layer hand pruning technique.

In Kennesaw we had very large American boxwoods across the front of the house and front landing.  They looked great and appropriate for a historic 1880’s house.  But leaf miner control required chemicals I was not happy using.  The adjacent front courtyard was re-edged with Dwarf Yaupon Holly.  You can hardly tell the difference between the holly and the boxwood except of a slight foliage color difference.  Both are effective.

I leave the formal garden of schedules

Where hours hedge me, clip the errant sprigs

Of thought, and day after day, a boxwood

Beware the bears? Some bare facts from wildlife experts

N.C. Senate continues to stall HB 13; districts brace for the...