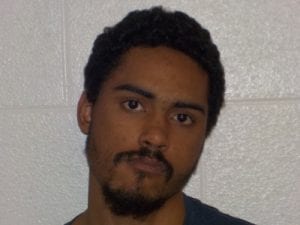 A brotherly disagreement doesn’t have to involve the authorities, but often does when drugs or alcohol are involved. A November 19 Franklin Police Department arrest report describes a fight that broke out between brothers Joshua Tyler Watts and Jacob Lee Sandefur that could have ended with a bag of candy on a table. Instead, an allegedly intoxicated Watts was alternately fighting, yelling, crying, insulting officers and destroying property. Ultimately, he was sent to jail by his beat-up brother.

Officer E.D. Kirkland responded to 254 N. Womack St. at about 10 p.m. to find a sliding glass door knocked off its rail, a shirtless man in the living room and a small child on the couch. Officer Kirkland asked the man, Watts, 23, if he had hit his brother. He said he had not.

“Yes, you did,” said the victim’s sister, Caitlyn Sandefur.

Jacob Sandefur was in the apartment’s backroom, nursing a head injury and sore neck sustained when he was grabbed by the shirt and heaved through the apartment’s glass door. A second witness, Luther Anderson, said Watts was on drugs and had assaulted his brother with multiple punches and then by throwing him through the window and screen. It all started when Sandefur allegedly took a game from Watts’s son and threw a bag of candy on the table.

Jacob Sandefur wanted his brother to be charged for the assault and injury to real property. The charge of resisting officers came later.

Watts was asked by officers to calmly exit the apartment so that he would not be arrested in front of his son. He refused, arguing and insisting he want to dissuade his brother from pressing charges. He was taken into custody. As Watts walked down the apartment steps, his argumentative response intensified. He yelled so violently at the officer that he was spitting on the officer’s face. Watts refused to enter the patrol car and was forced in while screaming expletives.

He then began kicking the car divider and door. Shackles were required to sustain him and keep his seatbelt fastened. Watts began screaming “Pigs” repeatedly according to the report. On the ride to the detention center, he started crying, continued yelling, and fell to the floor of the squad car. Watts was held on a $500 secured bond.

Police Chief David Adams could not confirm whether Watts remained in detention or had bonded out, but he did talk about how to avoid such domestic incidents from getting out of hand.

If they are under the influence of alcohol or drugs, they can also seek voluntary commitment in a detox unit if taken to an emergency room, he added. In this case, no arrest is necessary.

“Usually when family is involved, to that extent, usually alcohol or drugs are involved,” said Chief Adams. “A lot of times it will happen when family are together for several days, like during the holidays.”