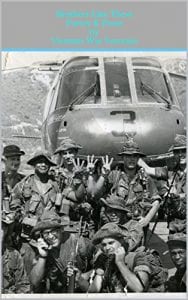 A resolution presented by Franklin native and Vietnam veteran Rick Norton at the October 1 Town Council meeting in Franklin focused on sufferers of PTSD (post traumatic stress disorder) and a writing-based treatment program that has proven effective. The resolution to designate Oct. 27, 2018, as Macon County, North Carolina, Post-Traumatic Stress Disorder Awareness Day, was read in its entirety by Mayor Bob Scott and includes verbiage citing the seriousness of PTSD.

Sponsored and supported by the Vietnam Veterans of America Chapter 994, the Veterans of Foreign Wars Post 7339, and the American Legion Post 108, the resolution calls attention to an event on Oct. 27 on the campus of Franklin High School – at which at least 15 veterans will present readings from a book titled Brothers Like These. A creative writing program at the Charles George VA Medical Center in Asheville resulted in the publication of the book.

According to a June 2018 report by the U.S. Department of Veterans Affairs, the creative writing program was led by VA Physician Dr. Bruce Kelly, professor at Appalachian State University and past North Carolina Poet Laureate Joseph Bathanti, and therapist/writer Elizabeth Heaney. Together they held four, eight-week sessions and continued meeting monthly with participants, all of whom suffered from PTSD.

“Writing programs focused on the narrative set in a supportive, non-judgmental environment can restore a sense of pride, build new camaraderie, nurture creativity, and help veterans find the path to a better tomorrow. The painful memories and regrets can become a less constant daily companion with continued honesty, writing, and community,” shared the report.

Even though Norton pointed out that all contributors to the book, “Brothers Like These,” which will be sold at the event, are war veterans from counties in Western North Carolina, PTSD is a serious condition that can affect individuals experiencing a tragedy, loss, domestic violence, and more. He said that the main sponsor of the resolution, Vietnam Veterans of America Chapter 994, of which he is a member, was contacted to host the event because the Franklin chapter is the largest in North Carolina.

“The treatment program at Charles George VA in Asheville was intended to use writing to open the box … to get memories out and on paper instead of just talking about them,” said Norton. “This program has been a successful means of coping.”

He shared with the Town Council that several in the program indicated writing stories and poetry has helped them with PTSD more than any other form of treatment.

Norton added that if attendance and interest is significant at the event, a writing program like the one in Asheville may be instituted in the Town of Franklin.

Commissioners hope for the best with FIBER Act

Vandals targeting signage of both parties