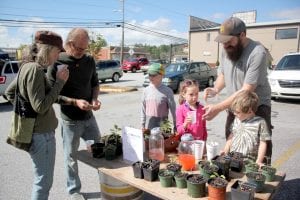 Starting your own business is never easy, and when you’re eight-years-old and your younger brother and sister want a piece of the pie, its even tougher, but Jude McIntee is not only making it work, he is excelling.

While learning about Abraham Lincoln in class last year, Jude learned that Lincoln worked small jobs when he was young to earn money and decided he too wanted to have a business. With the help of his mother Jennifer, who is also Jude’s homeschool teacher, he decided to start growing herbs and tomatoes and sell the plants at the local farmer’s market.

Jude took money he had gotten for his birthday, invested it in materials he needed, soil, seeds, pots, and fertilizer, and started his business, All Grown Up. In the first year, he sold 50-60 plants and used the money he earned to reinvest in his business with plans to keep it growing.

“We used the seeds from last year and planted them and waited for them to grow,” said Jude. “When they have more than two leaves, I moved them outside.”

To get ready for the season, Jude invested in a greenhouse and bargained with his sister Esther to let him use space in her room, which has the most sunlight in the house. With the help of his dad Noah, he built the greenhouse and every day would take the nearly 200 plants outside to get fresh air.

“The hardest part of my business was having to take the plants in and out every day,” said Jude. “But when they got big enough and it was warm enough, I didn’t have to keep taking them in and out and that made everything a lot easier.”

His sister Esther helped with the daily transportation of the plants, and so did their younger brother Levi, akin All Grown Up a true family venture.

Last Saturday the brother and sister trio loaded up all of their tomato plants and herbs and headed to the Franklin Farmer’s Market for their first day of business for the season.

“We had to get up really early,” said Esther. “But when the sun came out and it started to warm up, it was my favorite part.” 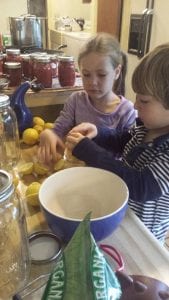 All Grown Up is more than just vegetables and herbs this season, Esther wanted to bring something new to the table so she decided to offer lemonade, but not just any lemonade.

“It is all organic, and that is really important and good,” she said proudly. “And we had lots of taste tests to pick out the best recipes.”

The all organic lemonade came in three flavors, lavender, strawberry, and “natural normal” as Esther explained.

“I was really surprised that I liked the lavender,” she said. “My mom said I would like it and I did.”

Just like Jude who was responsible for plotting the plants and watering them every day on his own, if six and a half-year-old Esther was going to have a part of the business, she had to be responsible for her portion.

Esther even could proudly tell you how to infuse the lemonade with lavender and strawberry and hopes by this Saturday, when the trio will be set back up at the Farmer’s  Market, she will have new flavors to offer. She used 40 lemons to make the three gallons of lemonade last weekend, which she sold for $1 a cup. She sold 22 cups on Saturday.

“Making the lemonade and selling it,” Esther said of her favorite part of having a business with her brothers. “Actually, just making it because I get to do it with my mom and my whole family and I love being together.”

“My favorite part is getting the tips,” five-year-old Levi admitted. Levi, who is still crafting his talent to see what he wants to add to All Grown Up, is happy to pitch in on the labor side of the business. He helps his sister squeeze the lemons and helps Jude carry the plants in and out and set up the table at the market. He is also first to volunteer when it’s time to sample the product.

“He is really good at helping during our taste tests of new lemonade flavors,” said Esther.

“And he loves tomatoes so much that he eats them right off the plant. Sometimes we don’t 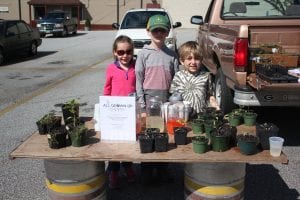 have very many tomatoes left because he eats them all,” said Jude.

Like any young entrepreneur, Jude’s favorite part of being a business owner is when the cash rolls in. “I like making the money,” he said. “I want to save it until there is something I need,” said Jude

“I want to spend the money I make for a car or for college,” said Esther. “We all have bank accounts.”

While the production side of the business has been a lesson learned at home, with the guidance of mom and dad, when it comes to selling their goodies at the market, the trio are naturals.

“Growing the plants is more difficult than selling,” said Jude. “I like talking to people and answering their questions.”

From how long the plants can stay in their individual pots, to how often they need to be watered, Jude was ready on Saturday morning. He sold about 50 plants last weekend and will be at the Franklin Farmer’s Market, alongside Esther and Levi, this Saturday with three new varieties of tomatoes and 150 more plants.

Making sure he has as little overhead as possible, Jude has plans to replant any of the tomatoes  that aren’t sold in his garden at home, and by July, have actual tomatoes to take back to the market this Summer.

A Night with the Legends to benefit Shop With a Cop