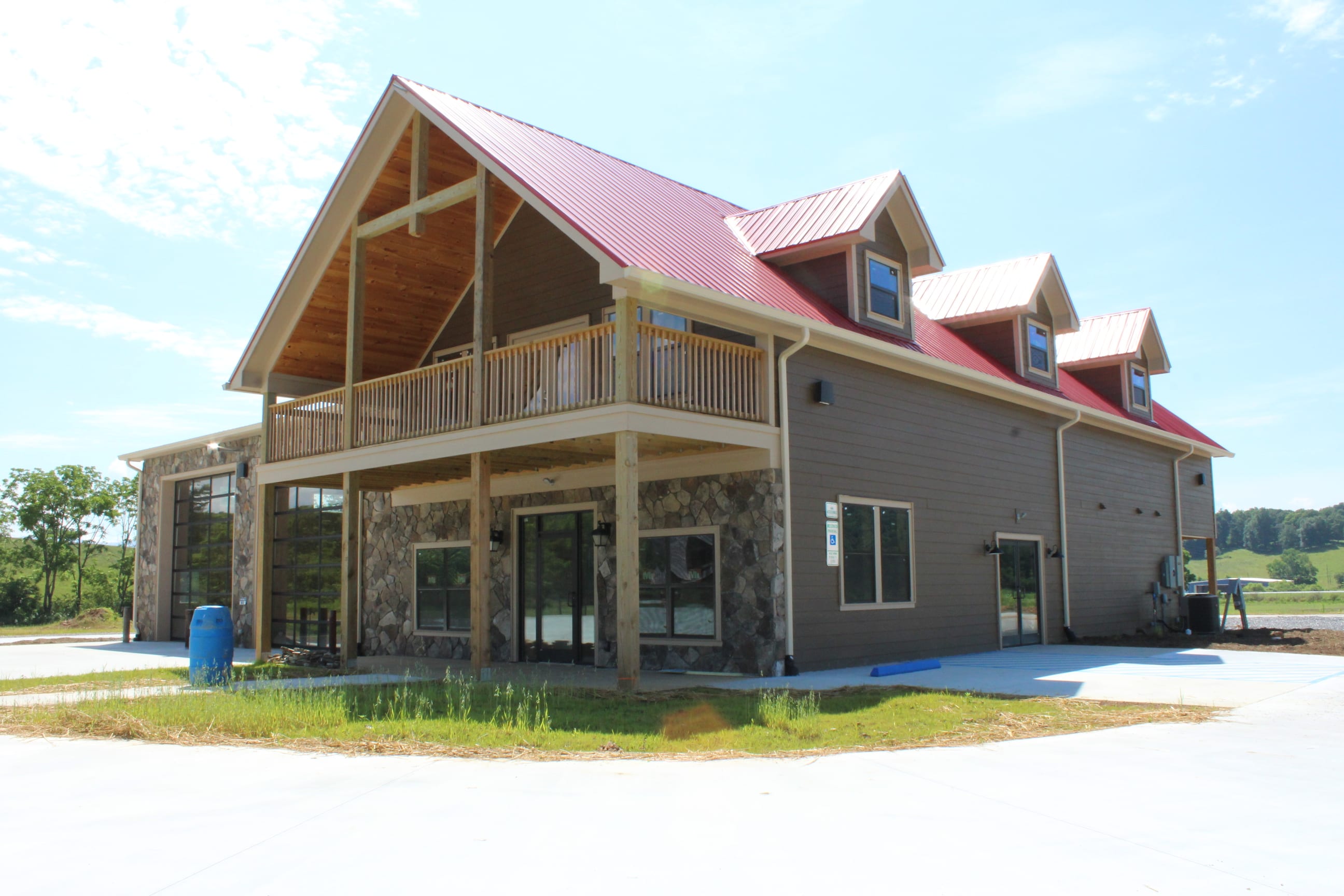 A couple of years ago, when a Hurricane wreaked havoc on the southeast, the bridge in front of the Burningtown-Iotla Fire Department (BFP) in Macon County was completely washed out, cutting off life saving access to the north end of the county. That’s when members of the BFP began looking for property on the opposite end of the fire district to build a substation to better serve residents.

“We had an opportunity back then to secure a grant from FEMA to build a new substation to ensure that we didn’t lose access to the district again, but that grant required us to own the property we constructed the substation on and despite looking all over the district, we just weren’t able to find anything,” said BFP assistant Chief Mike Shuler. “So we lost those grant funds, but the need for a substation was still there, so we kept looking until we found the property where the new substation is located.”

According to BFP Chief Ken McCaskill, the decision to build a substation, from the location to the design wasn’t something that just happened overnight.

“We held five community meetings to get input from the community,” he said. “We asked them what they would like to see and what purpose they would like the building to serve. We know that their tax dollars were paying for it and it’s supposed to be a service to this community and that’s what we wanted to build.”

Shuler said the number one thing they heard from members who attended the community meetings and gave input on the new substation, was that they didn’t want to see just another metal building. The Baptist Children’s Home, who owns the property where the substation is located, also agreed that a substation could serve the community better than just a square metal building.

“Community members told us they wanted something they could use for family reunions, fundraisers and community events,” said McCaskill. “We rent this place [main station] out for those types of things and birthdays, but we wanted the substation to be more than just a place to park a truck. We wanted it to be there for the community.”

McCaskill noted that the 7,000 square foot building includes four bays, a meeting room and a kitchen, all of which can be used by the community for events.

The substation sits five miles south of the main station, and five miles closer to town. McCaskill noted that many of the department’s 30 volunteers work in town, so in the event of a call, they would have to drive by the location of the substation, go five miles down into Burningtown on winding mountain roads, pick up a truck, then head to the call. According to McCaskill, the new substation shortens response time by eight minutes to many parts of the BFD district.

“If your child was in that house that was on fire, what would eight minutes mean to you?” he asked. “We can talk about money all day long, but those eight minutes, that’s what we saw when we were building this substation.”

The location of the new substation will mean 126 residents within the five-mile radius standard set by the Office of the State Fire Marshal, will be able to get fire insurance on their homes. As it stands, those 126 homes are outside of the five-mile radius allowed to get reduced homeowners insurance rates based on the fire departments ratings. Those 126 residents still have to pay the fire tax, but don’t receive a benefit from its services. The substation brings those homes into the radius and will allow them to get insurance and lower their premiums as soon as the substation passes inspection by the Office of the State Fire Marshal, which will be scheduled as soon as possible.

BFD responded to 251* calls in 2016. That was more than a 40 percent increase over 2015 and so far this year, call volumes are up another 20 percent. With an increase in demand for services, as well as the construction of the new substation, BFD requested and was granted a tax increase from commissioners earlier this month. The entire annual budget for BFD approved by commissioners was $213,743.** The increase in the BFD fire tax to .1009, which provides the department with just over $30,000 annually to account for the increase in calls and the operation of the new station. BFD’s final budget approval was $8,000 less than what McCaskill originally requested.

Commissioner Paul Higdon voted against the fire tax increase of BFD and criticized the construction of the new substation. According to Higdon, BFD spent more than $500,000 for the substation, which he deemed excessive. Comparing the Burningtown substation to a substation recently constructed on Cashiers/Glenville, Higdon noted that BFD was nearly triple the cost. Shuler noted that the price difference between the two substation was due to the fact that Cashiers/Glenville was half the size, a two bay substation without a meeting room or kitchen.

According to Shuler, the new substation didn’t quite cost the $500,000 price tag Higdon placed on it. BFD took out a loan to construct the substation in the amount of $320,000. They spent just over another $100,000 from funds they had saved up over the last few years, bringing the total for the building closer to $440,000, said Shuler. McCaskill noted they did run into some unexpected expenses such as having to pave the driveway of the building, something they were not planning on but was required before the building would be permitted.

“Every check we have ever written and every receipt we have as a department is placed on that board for anyone to come and see,” said McCaskill. “You can’t get any more open than that. Commissioner Higdon never attended a single one of our community meetings on the substation and has never been here to see those receipts.”

Higdon serves as the Burnigntown representative on the board and said during the last commissioners meeting that he used to serve on the BFD. According to Shuler, the state has no record of Higdon ever serving as a volunteer fire department, but he did sit on the department’s board of directors for a little over a year, but according to McCaskill, hasn’t been to the department since.

The substation secured the certificate of occupancy last week and got the power turned on shortly thereafter. By the end of the week, Shuler noted they hope to move the trucks in and start operations at that location.

*In the June 22 edition of the Macon County News, it was stated the number of calls was 215, the correct number is 251.

**In the June 15 edition of the Macon County News, it was stated that BFD requested a budget increase of $231,743. The $231,743 that was requested was the overall budget, not an increase. We regret the error.