Just before Valentine’s Day, Ashley Sanders, owner of Rust and Relics on Main Street requested the assistance of a hazmat team to investigate noxious smells that would periodically waft through the building. The hazmat team, who responded a couple days after Sanders called with concerns did not detect any hazardous fumes — however, according to Sanders, the fumes were not occurring at the time. The building has continued to have issues with the gas-like smells. 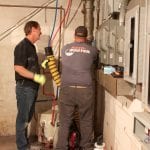 Last week, Sanders enlisted the services of a Roto Rooter plumbing company out of Valdosta, Ga., to look into the building’s infrastructure to find the source of the odor and according to the report sent to Sanders, it appears the problem has been identified.

“Due to fumes commencing once again, Roto Rooter returned Wednesday,” said Sanders. “Prior to opening any sewer lines … a gas analysis was completed. Sewer gas was detected throughout lower level with the heaviest being in the back near the bathrooms. Previously I had many plumbing issues addressed and corrected at my expense – a brand new (handicap) toilet installed, leaking water line pipes replaced, ‘P’ traps on sinks, and numerous open pipes capped throughout the building. I ensure water is often run down the floor drains and unused sinks. However, it makes it less effective … when pipes are not visible, old and broken. The drain pipe under the sink is disintegrated, hidden behind the wall. This is one source of fumes stemming from behind the wall.  There was no way to know of the plumbing system behind walls and underneath each floor level hidden.  Many sewer pipes lead to toilets or sinks that have been removed and filled in with concrete; but the piping underneath is still existing.”

Roto Rooter’s report also revealed that in addition to this drain behind the wall, a smoke test was done and smoke made an appearance on all three levels.

Previously, Sanders, and others experienced headaches, rashes, hives, burning eyes, and other similar reactions. After closing early and exiting the building, symptoms would cease.  Sewer gas is highly corrosive and toxic, she said.

Sanders owns the business Rust and Relics, but does not own the building in which the business is located. Town of Franklin officials have previously reviewed Sanders’ complaints and determined that the issues Sanders is facing is a tenant/landlord issue, not something in which the town or county can get involved. Sanders has enlisted the help of local attorney Ward Collins to mitigate the situation with her landlord, but has been so far been unsuccessful.

Per Sanders’ lease agreement, the landlord, which is listed as Baird Cove Properties, LLC, is responsible for the upkeep of the building itself and capital improvements. However, attempts to remedy the situation prior to the Roto Rooter inspection proved fruitless. Now, Sanders has sent the inspection and work estimates for repairs to the landlord — but even a week later has not received a response.

Sanders doesn’t want to have to pursue the matter in court, however, she says she has an obligation to her customers and employees to ensure their health and safety.