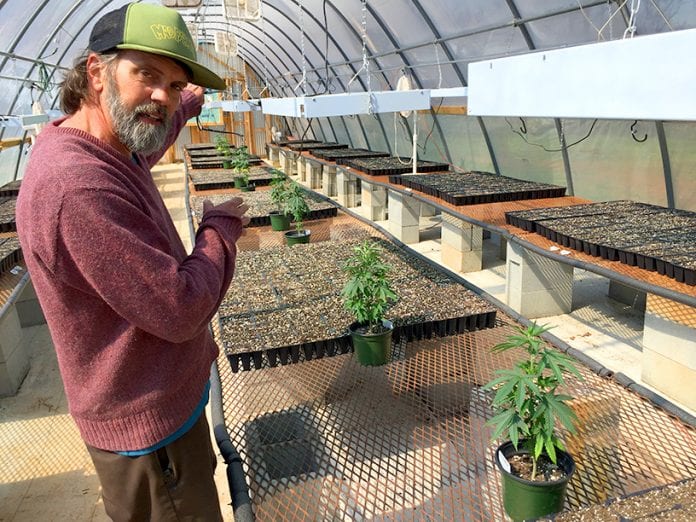 Not all cannabinoids are equal. The cannabinoid, or naturally occurring chemical, in marijuana is THC, which induces the “high” drug users seek. But there are more than 100 varieties of cannabinoids and most do not induce a high.

Some cannabis plants have the cannabinoid CBD, which does not have psychotropic, or mentally altering, properties. But it still has the properties from which pain sufferers are benefiting nationwide and it is legal to possess and grow in North Carolina with a permit, explained Appalachian Growers’ co-owner Lori Lacy, 52.

“It’s not pot, you’re not going to get high,” said Lacy, a former personal trainer who has never smoked pot.

Pain sufferers, farmers and entrepreneurs alike are increasingly taking note that CBD can be just as effective as THC in treating a variety of ailments from stress to sleeplessness to joint pain. It smells and looks just like marijuana, but it is legal, regulated and the variety grown by Lacy only has .01 percent amount of THC, which is far below the trace amount of 0.3 percent permitted by the state.

“A lot of stigma goes away when you know you’re not getting the THC,” she said. “Some of the populations that would not have used it in the past are now using it for medical benefits.”

A 120-year-old barn sits on the eight acres of farmland Lacy and her partner, Steve Yuzzi, 50, lease in Cowee. Where cattle once roamed and wheat was harvested, a new commodity is thriving.

Lacy and Yuzzi invested $140,000 to start, then recruited three more investors for an additional $300,000 to launch their industrial hemp growing business in February 2018. Reinvested profits have been used for expansion, including building a 4,000 square-foot warehouse with HVAC system and dehumidifiers for drying and storage.

There’s also a lot of education – from the conferences and workshops they attend across the nation, to the booths they rent to educate consumers, like at this past weekend’s Springtopia II music festival in Franklin, where they also sold product.

“I think they like us because we are not the typical stoner,” said Yuzzi, a serial entrepreneur who opened Sylva’s bowling alley and the Papa’s Pizza restaurants in Sylva and Cullowhee. Lacy continued, “This is a business, it’s a serious business and it needs to be taken out of the back alley.”

Both agreed that until the commodity becomes mainstream, consumer education is key.

“When the proper education is given, the possibility of helping somebody is great,” said Lacy, who uses CBD ointment made from biomass material on her skin to improve conditions, and about 25 mg in a liquid dropper under her tongue to help maintain constant body temperature, relieve aches and pains and let her sleep easy.

Thin and fit with blonde hair, Atlanta-native Lacy isn’t a boss lady who barks out orders to subordinates. Instead, she directly explains what she wants – usually regarding quality or efficiency – to her eight employees, who stop what they’re doing and listen carefully.

“It’s super labor-intensive,” she said, after explaining how high-quality buds are separated to be smoked, and contaminated buds that would otherwise cause a harsher smoke, are put into biomass bins to be pressed for CBD oil.

“What I’m really focused on is trying to find out how to automate my system but still keep the quality,” she said.

In her dimly lit warehouse, stacked high with product separated into bins of A and B-grade “bud” or flowers, biomass, even stems set aside for potential future use, employees with aprons and gloves carefully separate, pack pre-rolls or run buds through a trimmer machine to remove stems.

When asked if 7 grams is a lot, laughter erupts among her employees. How long would it last?

“A week,” someone shouts.

Lacy knows her product, grown in the rich silty sand of the Little Tennessee River, is of high quality, so Appalachian Growers are working on releasing their own product line instead of only selling to dispensaries in Asheville, and out-of-state destinations in South Carolina, Tennessee, Florida and elsewhere.

Yuzzi explained that the entire farm and production facility is protected by a high-end security system with leased motion detectors and cameras to prevent theft by employees or curious high schoolers who think the cannabis is pot.

Employee theft is not a problem – there’s a table of damaged product for employees to take – and Lacy is quick to shine the farmers who have been with her since day one.

“We’re here to provide medicine, man,” said farm manager Josh Brandes, 45, as he was hard at work germinating Oregon tilth seeds in the greenhouse as the Grateful Dead played in the background.

Lacy cautioned that without FDA approval, CBD is not considered a medicine and growers, as well as dispensaries cannot diagnose, prescribe or even provide recommendations for its use.

She shrugged later when asked if she’s worried about hiring marijuana users.

“I can’t get around it, most everybody is a pot smoker,” she said. “In this industry, we have found that we are one of the few people that don’t smoke, and we’re coming across very professional people.”

While trying to market every part of the plant, Lacy and Yuzzi, who live in Waynesville, are trying to emphasize sustainability and use of local businesses for grading, construction and farming help, even collaborating with local farmers.

“Everybody in this county– they know about farming,” she said. “We’re working with a couple of the farmers and they do respect us for the fact that we ask them for help.”

Neither co-owner is deeply concerned with competition. They’re too busy.

Plus, the startup costs for infrastructure to properly dry the product and building a network of end buyers requires a lot more effort than planting seeds in a field.

After a quick ride on her Kubota 4×4 down to the riverside fields, where watermelon and corn used to grow, Lacy reflected on the whirlwind that has been her life as a farmer for the past year.

“It’s the last thing I ever thought I would be doing, but it’s been the adventure of a lifetime,” Lacy said. “It’s the hardest thing I’ve ever done– it’s like one of those things, I tell Steve: who gets to say they did this in their life? That’s kind of cool. So that’s that!”