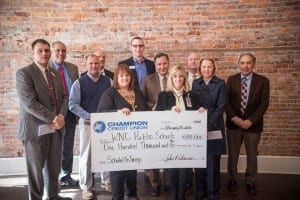 Champion Credit Union (CCU) issued a challenge to members in 2015 to show how much money they could save by refinancing their loans. Setting a goal of $100,000, CCU made the promise to donate savings generated by members to area schools.

Nine schools in WNC received a piece of the $100,000 with $6,530 being awarded to Macon County Schools. Macon County Superintendent Dr. Chris Baldwin traveled to Canton for the check presentation.

In 2015, CCU kicked off their Schooled on Savings campaign, which was designed to show their members how borrowing with their local credit union can help their community. Champion Credit Union set a goal to save their members at least $100,000 in loan interest by refinancing with them. As members refinanced their loans with Champion throughout the year, the credit union tracked the amount of money that was saved in loan interest for each loan. “We were saving our members thousands of dollars sometimes,” says Brooke Scott, Financial Service Specialist with Champion Credit Union. “It was so exciting to be able to show them that.”

To take things a step further, Champion Credit Union decided to take the $100,000 in savings and roll that directly into the communities that they serve in an impactful way. “We wanted to illustrate how borrowing with your local credit union helps your community,” says Noralynn Gudger, Marketing and Communications Manager. “What better way than to take the money that we saved our members by borrowing with us and give it directly back.” President and CEO Jake Robinson suggested the school systems and it immediately seemed like a natural fit. “The schools are struggling with the support given on a state and federal level,” says Robinson. “While we can’t fix it with this, we certainly want to try and do what we can.”

In the fourth quarter of 2015, the goal was met and the savings number crossed the $100,000 mark. “I was so excited when I saw that it had happened,” says Gudger. As the holidays came to a close and January testing with the students finished up, plans to cut the checks began. “This is what we have looked forward to for a year,” says Robinson. “We saved our members money, and now we get to play a small role in showing our support to the local public school systems.”

On Thursday, Feb. 25, Champion Credit Union welcomed superintendents and school personnel from the nine counties that they serve in Western North Carolina at The Imperial of Canton to present them with their portion of the $100,000, which is based on the number of students in each of the public school systems.