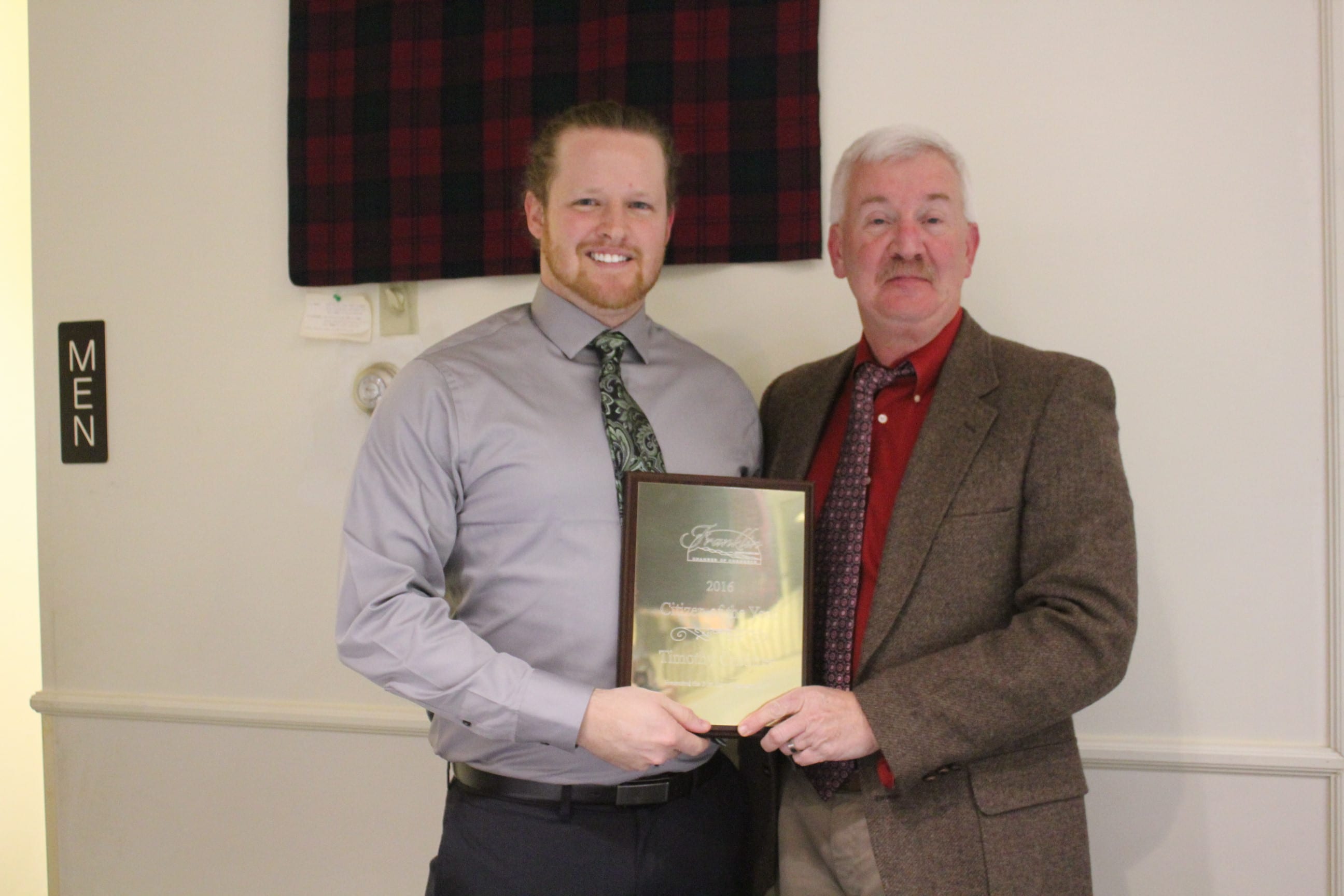 Outgoing President of the Chamber of Commerce Jim Breedlove addressed a sold out crowd on Tuesday night for the annual end of year chamber banquet and award ceremony held at Tartan Hall. Breedlove emphasized the importance of a successful community by the people who work and serve, and for 2016, one Franklin resident was recognized for going above and beyond to not just contribute to the community as a business owner, but to dedicate his time to giving back. Recognizing his continued community involvement, Timothy Crabtree was named the 2016 Chamber of Commerce Citizen of the Year.

“I am honored to receive the award,” said Crabtree. “I share the award with so many other people that work harder than me. I play a small part in many organizations that have so many amazing people! It’s a pleasure helping others achieve our goals in Franklin, NC!”

For the last two years, Crabtree has partnered with the Macon County Sheriff’s Office to host “Tip a Cop” a fundraiser event that Crabtree came up with to raise needed funds for the county’s Shop with a Cop Program, which provides Christmas gifts to children in need in the community. Motor Company Grill and the Crabtree family offer the use of the restaurant for the night and with law enforcement officers as the servers, 100 percent of the tips generated are donated to Shop with a Cop.

When the fires first broke out in Macon County in early November, Crabtree was one of the first businesses to step up and donated hundreds of sub sandwiches to the firefighters on the ground fighting the blazes in Macon County. Crabtree also partnered with Joe Kennedy of Twice Played Sports to organize a “Friends of Firefighters” event to raise needed funds for the local volunteer fire departments who have been working alongside U.S. Forest Service officials as the fires burned in Macon County. Crabtree and Motor Company Grill donated spaghetti dinners to raise money for the cause.

This past Halloween, Crabtree signed up for the Safe Kids event hosted to provide children with food allergies a safe trick-or-treating experiences. Safe Kids purchased non-candy treats for all of the Main Street businesses in support of the Teal Pumpkin Project and Crabtree was one of many businesses who stepped up to hand out the treats on Halloween.

Crabtree worked with members of the community to organize the Haunted Corn Maze at Deal Farms, to benefit Special Olympics. Crabtree worked with Seth Adams and Joe Deal to plan a month long event at Deal Farms that not only generated business for one of Macon County’s longest operating farms, but generated tourism and raised funds for Special Olympics.

Again this past Christmas, Crabtree hosted Cookies for Santa. a free event at Crabtree General. The store has hosted this event for the last three years and was something he took over after the town decided they didn’t want to continue it. Crabtree saw a need in the community and wanted to be sure that children still had the opportunity to see Santa. He and his staff put up a mailbox and personally responded to every Letter to Santa that they received. The time and effort this takes, with it being a 100 percent free community event, other than the donations that are accepted for KIDS Place during the event, is commendable.

Crabtree also volunteers as a performing member of the Overlook Theater Company which puts on first class performances at the Smoky Mountain Center for the Performing Arts, volunteering his time to bring smiles to families in and around Macon County for years.

Other Chamber Awards and Recognitions

Eric Haggart of Timeless Moments Imaging was awarded the Chamber Member of the  Year Award. Haggart has been a member of the Chamber for nearly 10 years and has previously served on the Chamber’s Board. In addition to volunteering to sing at Chamber events such as the annual Fourth of July Celebration and the Mountain High BBQ Festival, Haggart often volunteers his time and talents to help promote Franklin and all it has to offer. Haggart currently serves as the Chamber’s photographer, capturing breathtaking views all over Macon County. Haggart is also the sole manager of the Chamber’s social media sites, which generates millions of views and engagements with the public.

Macon County’s Quilts of Valor program was honored as the 2016 Club/Organization of the Year.

“We are very honored that Mr. [Gary] Shields nominated our Quilts of Valor Bee for the Club of the Year award,” said Nancilee Dills, president of the Smoky Mountain Quilters Guild. “About a third of our Smoky Mountain Quilters Guild members participates in the Quilts of Valor Bee.  This past year alone, we have awarded 98 quilts to service men and women.  Since the beginning  of this group in 2008, we have awarded 757 Quilts of Valor, including our entire local National Guard Unit when they returned from Afghanistan several years ago.  Carlie Nichols is the chairman of this Bee, and has done an outstanding job keeping all this organized.  Each quilt has a handmade label with the recipient’s name written on it and its own presentation case,  and each recipient receives a hand-written thank you letter for their service to their country.”

While the Quilts of Valor Bee were specifically recognized on Tuesday night, the Smoky Mountain Quilters Guild has also given approximately 400 quilts a year (for at least the last 10 years)  to Angel hospital and Macon Program for Progress’ Head Start.  The have also donated StoryBook  quilts (books that have matching quilts) to Macon County Elementary Schools, Fontana Library System, and to Head Start.  The group participates in all the local festivals and are available to talk to school groups and others about quilting and about Quilts of Valor.

Chris Brouwer presented Brianna Norris with the 2016 Youth Citizenship Award. Norris has been an consistent volunteer in the community for years, volunteering her time to help organizations such as Kiwanis Club, The Smoky Mountain Pregnancy Care Center, REACH, March for Dimes, serves as a junior volunteer at Angel Medical Center, Macon Tracs, and is active in her church. Norris is also an honors student at Franklin High School, who participates on the FHS Dance Team, Upward Bound, and Student Council. When she isn’t volunteering, she still manages to find time to pursue her passions of horseback riding, archery, and dance.

Breedlove presented the first ever Chamber President’s Award to David Myers. Myers was recognized for his leadership in helping to plan and organize Chamber events such as the Mountain High BBQ Festival, which celebrated its eighth year last year. Breedlove noted that after seeing Myers’ diligent work on behalf of the Chamber over the last  year, he wanted to recognize him with the first ever President’s Award.

In addition to the first ever President’s Award, Breedlove also presented the Chamber’s first ever Distinguished Service Award to Brittney Burns. Burns was recognized for her work establishing Macon County’s first Safe Kid Coalition, for which she serves as chairman, organizing car seat safety checks, bicycle rodeos, Public Safety Days and a hot car demonstration. Burns is also active in Read2me, a literary nonprofit organization which funds the Dolly Parton Imagination Library and early literacy initiatives such as Story Walks and parent training seminars on the importance of raising a reader.

Lisa Leatherman with Duke Energy attends the Chamber Banquet each year and on Tuesday night presented the 2016 Duke Energy Citizen and Service Award to Mike Wilkins. Wilkins serves as the District Ranger for the Nantahala Forest Service for the Nantahala District. Wilkins has served as a district ranger for the Forest service since 1990 and with nearly a 30-year career to his credit, Wilkins stands as the longest serving ranger in the Eastern and Southeast region of the Forest Service. Wilkins was instrumental in the efforts late last year to battle dozens of wildfires that ravaged Macon County and all of Western North Carolina, serving as the Incident Commander for the Southern Area Blue Team of the United States National Forest. Along with the award, Wilkins was presented with a print of the Wayah Bald Tower.

EDC names nominees for Young Entrepreneur of the Year

Free seminar to discuss how to avoid being scammed