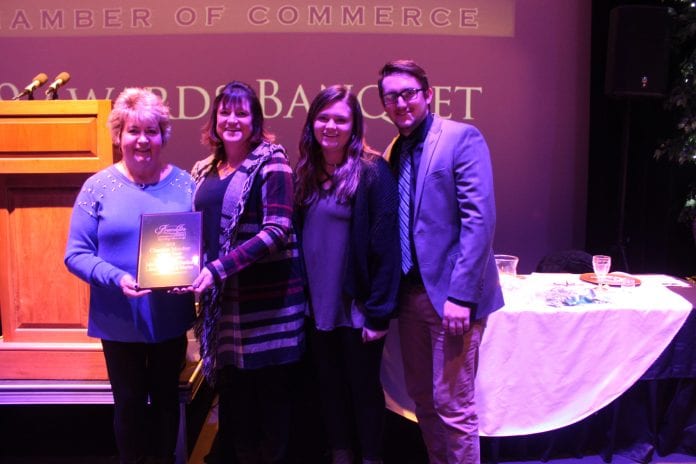 The Franklin Area Chamber of Commerce presented it annual awards banquet Thursday, Jan. 31. The banquet was originally scheduled for Tuesday, Jan. 29, but due to expected inclement weather, the event was postponed to the following Thursday.

Every year, the chamber of commerce accepts nominations for four prestigious awards, The Duke Power Citizenship and Service Award, Youth Citizenship Award, Citizen of the Year and Club/Organization of the Year.

The Duke Power Citizenship and Service Award recognizes and rewards leadership and/or involvement in volunteerism and community services to an individual, team or group.  Recipients of the award help foster a culture of citizenship and service that acts as a catalyst for others to become involved in civic and social activities. 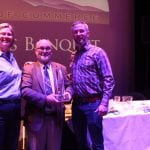 This year’s recipient is Bob McCollum. McCollum has been a member of the board at Cowee School Arts and Heritage Center Advisory Board since his retirement from Coweeta Lab in 2014. He has led the center throught several grant-funded projects and has been a part of the growth of the various programs and events that occur annually at Cowee School, like the Folk Festival, the summer concert series and Cowee Christmas. As a volunteer, McCollum has performed and overseen numerous maintenance issues with the center including painting, weed-eating, plumbing repairs and more. McCollum exemplifies community involvement and volunteerism. 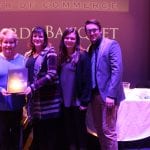 Lake’s End Cabins, Yurts, Marina and Grill was named Chamber Member of the Year. Along with being annual sponsors of the Mountain High BBQ festival, owners John and Bonnie Gordon have gone above and beyond to help in any way they can. They have helped furnish the board room at the chamber including new chairs and a custom-made board room table; decorated three walls at the chamber and is actively involved in making a new web site possible for the chamber.

Youth Citizen of the Year 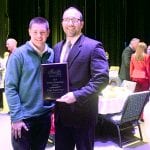 Cody Zuiderveen was named the Youth Citizen of the Year. Cody is a 10th grade student at Macon Early College and has a “passion for service.” While at MEC, Cody has been responsible for the completion of a number of projects, including the grading of the property for a basketball court; building furniture for students and staff, and maintaining the grounds. He has also been instrumental in securing resources for the Macon County STEM program, all while maintaining As in both high school and college classes.

Club/Organization of the Year 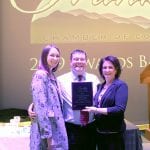 The Franklin High School Chapter of Future Business Leaders of Amerca was named the Club/Organization of the Year at this year’s Chamber banquet. As members of FBLA, students gain practical and critical experience for being a better business professional including adopting a code of ethics and establishing goals that involve community and citizenship. FBLA competed and won at the state level for their Colon Cancer Awareness Concert in Community Service Project for two years. On Feb. 22, the group will host an Alzheimer’s Awareness Concert at the Smoky Mountain Center for the Performing Arts.

Citizen of the Year 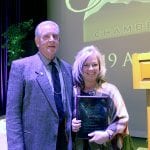 The Citizen of the Year Award recognizes an individual who significantly contributes to the community and is an inspirational role model. This is the most coveted award given by the Chamber of Commerce. The 2019 Citizen of the Year is Carol Anne Elliott.

Professionally, Elliott is an American Sign Language Educational Interpreter at East Franklin Elementary School. As a concerned member of the community, Elliott saw the need to address the opioid crisis in any way should could. She opted to call    together members of the community every Friday night to pray for victims and families affected by opioids. More than 100 people came to the first meeting. The Friday night vigil has been going on for about two years.

This past Christmas, a student for whom Elliott interprets, had the wish that the community come together to sing songs like the  citizens of Whoville in the movie, “The Grinch.” Elliott made it happen and more than 200 members of the community came together on Christmas Eve to sing carols with Daniel Candelario.

Last year, Cartoogechaye Baptist Church hosted “A Night to Shine” a prom experience created especially for special needs citizens 14 and over. Under Elliott’s leadership,  Franklin will once again hold the Night to Shine at Bloemsma Barn that will affect more than 100  residents in Western North Carolina. Through these events, Elliottt has demonstrated her love for community and her fellow man. 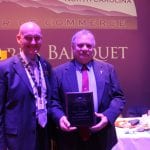 Relay for Life’s ‘There’s No Place Like Hope’ held on Main...