Too much color in a landscape?

Try as you might, using all your knowledge about native plants, sometimes you just need a strong shot of full season color from a non-native hybrid.  Such has been the case at my house.  The focal point of the front of our house and its parking court is defined by a stone wall.  Since we live in the woods, a splash of color somewhere seems important.  We have tried various annuals and perennials without much success until we discovered a Lantana “Chapel Hill Yellow.” It is not only beautiful but also has a well-known, touching story about a friend’s daughter. 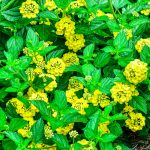 Perhaps the most popular Lantana “Miss Huff.”  It has been described as a perennial or a small shrub in zones 8 and further south. In zones 7 and above it is grown as an annual. It grows tall and wide with bright yellow-orange flowers and is very pretty.

Legendary plants-man, Michael Dirr’s daughter Susy, lived in Chapel Hill.  “Miss Huff” and another Lantana, “New Gold” grew in her patio garden. In 2006, a seedling appeared that was low growing and produced abundant bright yellow flowers the entire growing season.  This seedling was likely an accidental cross between the two Lantanas in Susy’s garden.  Michael turned this seedling over to a company he is associated with, Plant Introductions Inc. and they patented it. Thirty percent of the plant sale proceeds go to the Sweet Melissa Lung Transplant Fund at the University of North Carolina in Chapel Hill.  In spite of double lung transplants, Susy did not survive.

Dirr and his associates have named this Lantana “Chapel Hill Yellow.”  It starts blooming in late spring and goes non-stop until the first frost.  It produces hundreds of blooms that are self-cleaning as it does not need to be dead headed- pruning off spent blooms. This plant only gets 15 to 18 inches tall and can reach 10 feet wide if allowed.

What we have learned to do is to cut the plants down to the ground after the first frost.  We then apply a heavy layer of pine straw mulch to protect the roots during the winter.  Most of these plants survive the winter and come back again in the spring from underground roots.  We are suspicious that our high percentage survival rate of our Chapel Hill Yellow is related to the soil being kept a little warmer from the stone wall.  Occasionally, we have to add replacements. Cuttings root well. Keep in mind that this plant likes hot temperatures.  It’s originally from South America and South Africa.  It thrives in full sun and is not particular about soil types.  It even seems to tolerate drought.

In the spring we  remove the mulch and apply a light dusting of a slow- release fertilizer.  Then we sit back and enjoy the show.  We think that is important to get new plants in the ground before July to let strong roots develop.  It is recommended that this plant receive up to six hours of sun per day.

Not all Lantana produce seeds but this one does.  Its seeds germinate easily even in a gravel driveway.  In fact, in warmer climates such as zones 8-9 Lantanas are considered a nuisance because of their seed production.  We have found that the seedlings come true and can be a source of replacements or gifts.

In Karen Lawrence’s photograph the top edge of our stone wall was planted with Verbena ‘Homestead Purple’ ’another Dirr introduction. It makes a wonderful combination with Chapel Hill Yellow.  However, this Verbena does not bloom all season long.  It has a long summer rest period when it looks ragged.  It does weakly rebloom in the fall.  This is in direct contrast to Chapel Hill Yellow.

Karen Lawrence is a professional horticultural and wild life photographer from Franklin.

A Night to Shine is set for Feb. 5

Sheriff Holland will not seek re-election