Anyone walking, running or biking on the Little Tennessee River Greenway during the past few weeks may notice various additions and happenings.

A project in the works for a few years has been the Apple Trail. In late August, signage was erected to educate the public regarding why a grove of about a dozen trees was planted approximately halfway between Big Bear Park and Suli Marsh. While the Apple Trail is a Nikwasi Initiative project, Friends of the Greenway (FROG) volunteers have been involved. 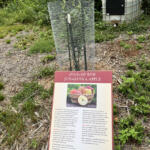 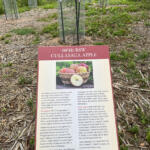 McRae by stating “Every now and then, a community is graced with the magic of a very special person. Barbara McRae brought kindness, wisdom, and goodwill to everyone she met in these mountains. … Barbara imagined an apple orchard to honor the original residents of this area and highlight their contribution to modern food and lifestyle. Barbara passed away in March of 2021 and the Nikwasi Initiative Board of Directors voted to honor her vision by naming this orchard path the ‘Barbara McRae Cherokee Heritage Apple Trail.’ After you walk along the trail, please share what you have learned about Cherokee Heritage Apples with other people so that everyone can learn about this culture, just as Barbara envisioned.”

Each variety of apple tree has English and Cherokee signage explaining its origin as well as the variety of apple’s uses, description, and more. Apple varieties include Junaluska, Horse, and Cullusaga.

“It could be 3-5 years before apples will grow and can be picked,” said Eisenbraun, “but we’re hoping that walkers or bikers can just pick one and eat it. And, if there is an abundance, maybe the fruit can be picked to meet area food needs.”

She added, “FROG has been extremely helpful. We put together and funded it, but FROG and the Eastern Band of the Cherokee Indian (EBCI) have worked together on this, and David Anderson, a member of the tribe, has been the horticulturist for the project.”

Eisenbraun shared that the apples will be grown traditionally, with no pesticides used.

“We do hope to add some companion plants that will attract pollinators to the orchard area.”

Eisenbraun said she hopes to have an Apple Trail grand opening in the fall, and she pointed out that funds needed to maintain the apple orchard are ongoing. “Anyone can make a contribution to Nikwasi Initiative for the heritage and history of the Trail and/or in honor of Barbara McRae,” she said.

Summertime on the Greenway also means FROG volunteers are busy weeding, planting, trimming, and mulching. Elena and Tom Marsh are board members of FROG, and she oversees volunteer activities for the maintenance of the Kay Coriell butterfly garden.

“We always enjoyed walking the Greenway, and then we started volunteering,” said Marsh, who explained she and her husband moved to Franklin in 2008.

FROG volunteers for the butterfly garden meet at 9 a.m. on Tuesdays and tackle whatever is necessary.

“Some are novices while some are already, or are becoming, master gardeners. Anyone who wants to volunteer needs to first become a member of Friends of the Greenway. And if they have questions, they can email me at marsh67@frontier.com.”

A historically significant stand of hops is once again thriving in an area designated by split rail fencing and future educational signage in the section of the Greenway just up from the Shops at Riverwalk entrance, past the butterfly garden.

“I’ve been tending the patch over the summer, which amounts to just an occasional weeding out of encroaching plants,” said Stan Polanski, a local writer, educator, and lecturer on the topic of native plants, who has been involved with the hops for the past few years. “I have noted a lot of interest from passersby, who often stop to admire the plants, read the signs, and ask questions. The hops are certainly thriving this year. The female plants are covered with cones.”

The hops plants were first discovered more than 15 years ago and McRae learned through her research about the area that hops were cultivated first by Cherokee and then by settlers for their various medicinal and food-related purposes.

The stand of hops emerges voluntarily from the ground and then grows, via a vine, up to 30 feet. Eventually, cones form. Polanski and other volunteers work to keep invasive plants from overtaking the hops plants so they can be seen by anyone on the Greenway.