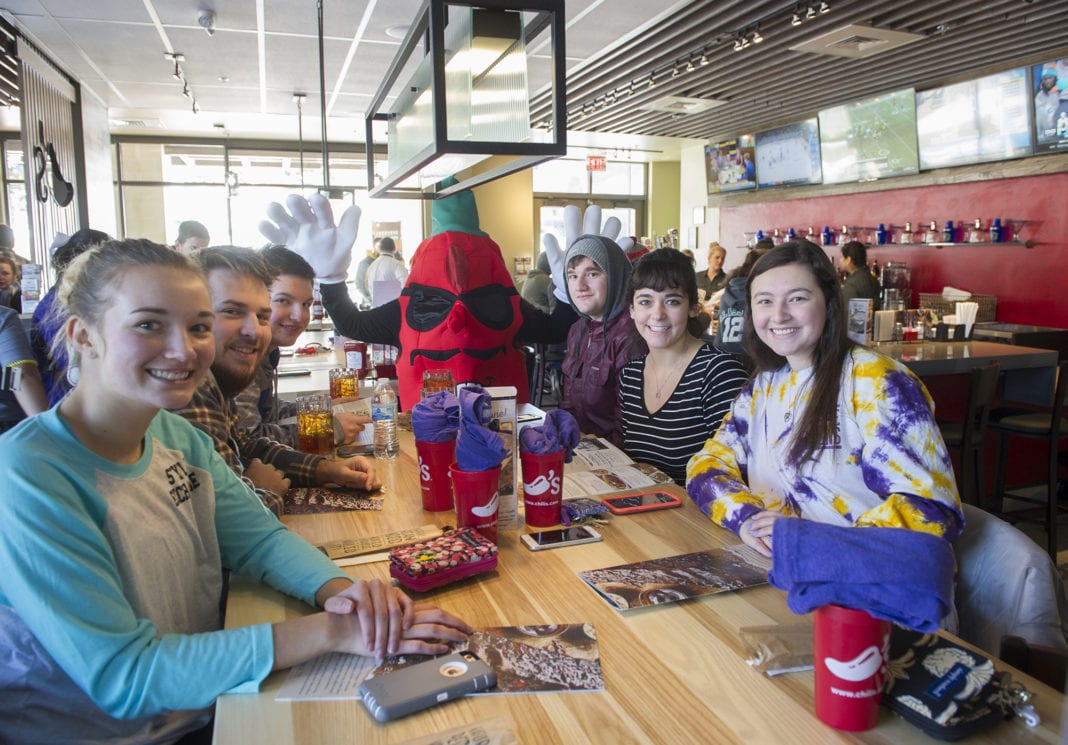 The weather turned out to be well past chilly and downright frigid Monday (Jan. 9) as Western Carolina University officials joined representatives from local government, Aramark and Chili’s Grill & Bar in celebrating the opening of the Chili’s restaurant on campus.

The new campus cuisine choice is being operated by Aramark, WCU’s food service partner. Located at the corner of Centennial and Central drives, the restaurant is occupying 4,200 square feet of space in Noble Hall, WCU’s new multi-use facility that opened in August, and can seat 125 customers inside and 75 on the patio. Chili’s is one of five commercial entities that will be operating out of Noble, which also includes room for 420 student beds.

Before the ribbon was cut to mark the opening of Chili’s, WCU Chancellor David O. Belcher told the crowd assembled in the shadow of Noble Hall that the new structure is revitalizing the “historic heart” of campus. “For those who have dreamed about this building project for the last few years, this is a milestone moment,” Belcher said.

“It is hard to adequately articulate the difference that a nationally recognized chain, full-service restaurant will make on the Western Carolina University campus and on its students, faculty, staff and the broader community,” he said. “We are thrilled to have Chili’s on campus.”

Brian McMahan, chairman of the Jackson County Board of Commissioners, welcomed Chili’s to Jackson County on behalf of board members and said the opening of a restaurant such as Chili’s provides an economic boost to the area. The crew of 70 Aramark employees at Chili’s includes 50 WCU students.

McMahan said the mobility of modern society has made restaurants “our shared kitchens and shared dining rooms” for socialization and to mark special occasions. “Chili’s has a reputation as being more than a place for great food. It’s a gathering place, a place where those kinds of events take place and where people will come and make memories,” he said.

Scott Lamond, resident district manager for Aramark on the WCU campus, said the student employees of Chili’s came back to campus from their holiday break so they could begin training on Jan. 2. Sixteen Chili’s employees flew in from around the nation to lead the training, he said.

Lamond thanked representatives of WCU and Jackson County for their support in getting the new restaurant off the ground.

“We are proud to welcome you to our Chili’s today as we open our doors, and know that the staff is as excited as you guys about opening this restaurant to the community,” he said.

Randy Emerson, franchise business director for Chili’s, also spoke at the ceremony, saying the company is proud to partner with the WCU community in creating the new jobs.

“You guys will see that there is an awesome culture in this restaurant, and that’s what our company is all about,” he said. “We want to build culture. We want to bring people together. We want to make you feel special.”

Chili’s is the flagship brand of Dallas, Texas-based Brinker International Inc., which has more than 1,550 Chili’s locations in 31 countries and two territories.

With the opening of Chili’s, three of five commercial tenants are in operation in Noble Hall, including a Subway sandwich shop and Bob’s Mini-Mart, a convenience store. Owners of MadStone Cafe and Catching Light Books, a combination cafe and bookstore, are eyeing a February opening, and a campus outpost for local outdoor recreation retailer Blackrock Outdoor Co. is predicted to open its doors early this year.

McClure Mill Road Bridge set to be replaced this fall

County to take the lead on The Greenway connector project

Updates to Land Use and Environment element of com plan looks...