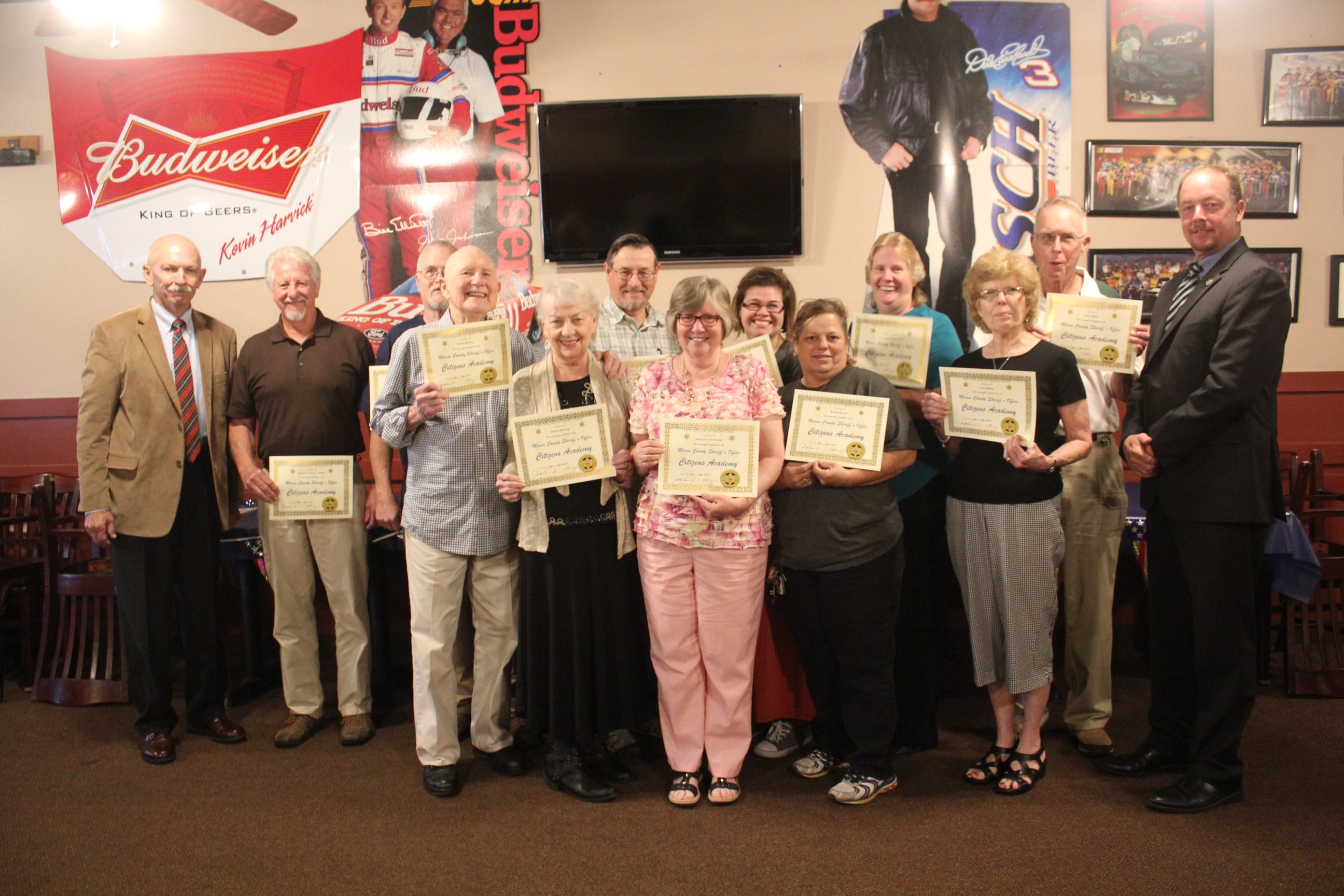 Each year, the Macon County Sheriff’s Office invites members of the community to participate in the Citizen’s Academy. The academy is a 10-week course that explains the ins and outs of the sheriff’s department. Last Thursday, the fourth class of graduates were recognized for completing the course.

“I continue to feel honored that members of our community want to come and learn what ‘their’ Sheriffs Office does on a daily basis,” said Sheriff Robert Holland. “There is no better way to build partnerships with community members than showing them first hand what we do and allow them a better understanding of how things are done at the local level.”

The Citizens Academy graduation was held at Fat Buddies restaurant and featured remarks by Eric Bellas, assistant District Attorney serving with District Attorney Ashley Welch. Bellas commended the MCSO on their diligence in facing the drug epidemic in Macon County head on.

“Sheriff Holland and his officers could do the bare minimum and arrest the drug users they encounter, but that’s not good enough for them. The perfect example of that is with Brody Hamilton, who was identified as one of the major drug players in Western North Carolina. Instead of just making the easy arrests, Holland and his officers found a way to get to Hamilton and completed an investigation that resulted in dozens of arrests and sent Hamilton to prison for the maximum time allowed of 56 years in prison.

Bellas and Welch tried the Hamilton case together, which in addition to sending Hamilton to prison, has seen dozens of other arrests that combined sent drug dealers in Macon County for a more than 300 years.

Sheriff Holland agreed with Bellas touting the dedication of his officers such as Deputy Josh Stewart, who was part of a team who worked well into the night Wednesday night before the Citizen’s Academy graduation working a major drug bust, but then still reported for meeting briefings with the sheriff by 8 a.m.

Deputy Stewart, along with other MCSO officers arrested five people Wednesday night during two separated incidents. Two suspects from Atlanta, Derry Brewer and Ernest Lee, and a Franklin resident, Samantha Ledford, were arrested at a local gas station as deputies responded to an altercation. A MCSO deputy saw the suspect vehicle stopped at a gas station and approached the suspect. After a search,  all three were arrested and charged with trafficking heroin. All three suspects had bonds set at $500,000 by magistrate Joe Brogden.

Then Thursday morning around 4:30 a.m. a traffic stop resulted in the arrest of two more individuals, Jose Escamilla-Campos and Sherrie Espinoza traveling from the Murphy area into Macon County. During the traffic stop and following a subsequent search, deputies found  28 grams of methamphetamine and a set of digital scales. Bond for both suspects was set at $20,000 by magistrate Justin Stamey.

“These arrests are just another example as to the dedication and hard work of those who protect and serve our community,” said Sheriff Holland. “While most slept,  there were many who were out doing exactly what we expect of them … patrolling our community trying to keep us safe and doing their part to lock up those who bounce in and out of our community only to spread the poison that we see destroying so many lives daily.”

A year after restoration project, Crawford Branch is thriving