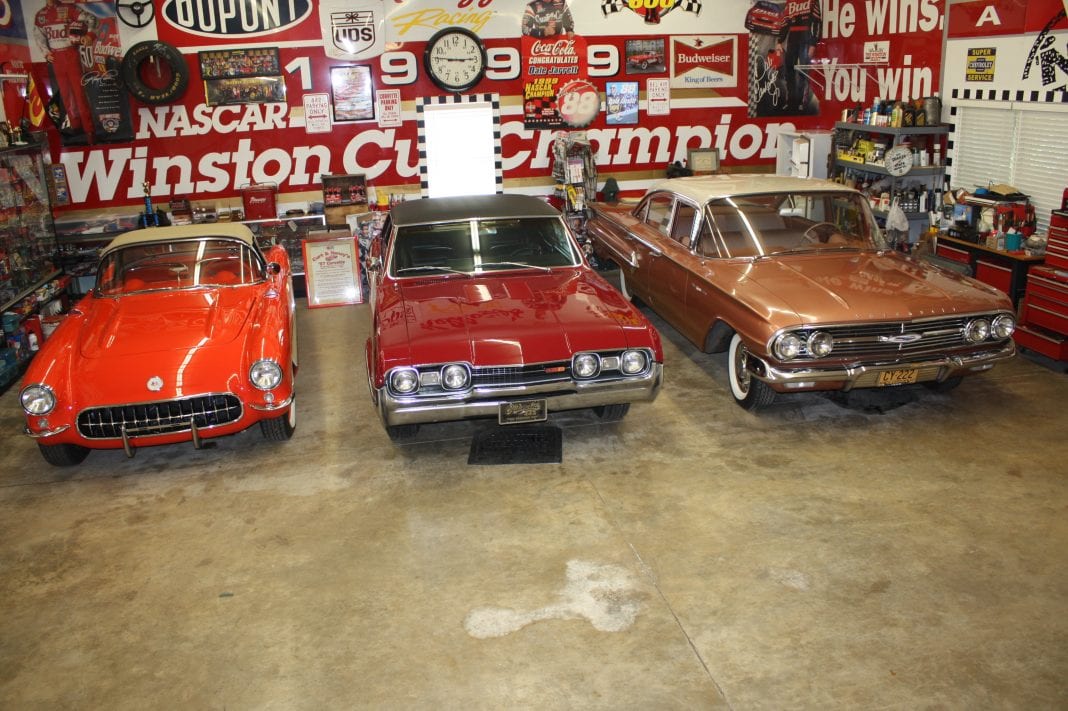 The baby-boomers’ memories of the automobiles from a half century ago (yes, 50 years ago) still retain the sights and sounds of the Golden Age of the American automobile.  The deep-throated rumble of the real muscle cars still send a shiver up the spine of boomers just it did when they were teenagers.  Recollections of an era that annually brought new and different and distinctive cars off the assembly lines ― vehicles readily recognizable and associated with specific manufacturers and production years.  No cookie cutter sameness here.

Curt and Nancy McCall are both natives of this area with ancestors reaching back several generations.  Incidentally, Nancy’s first cousin, Doug Welch, was the subject of the first classic car feature in The Macon County News.  Like Doug, both Curt and Nancy are passionate about their cars and the era of the muscle cars.

Upon arrival at the McCalls’ farm, Nancy greets me and loads me on the first of their vehicle collection ― a golf cart.  She chauffeurs me down behind the house down to the building where the three classics are stored.  The three cars sit comfortably in a spacious garage Curt built.  Everything in the garage screams classic car era and NASCAR.  Memorabilia surrounds the entire room, either resting on shelves, in display cabinets or attached to the walls.  The building also houses what has to be the ultimate man-cave, with a fully equipped apartment.

Their collection consists of three cars, covering the entire spectrum of collectible desirability.  They have one car that is what collectors now call Survivor cars, one that served as a daily driving car and one that is the result of a total rebuild.  All three have arrived in 2016 by totally different routes and all of them are important in defining the collector car market today.

Their first classic car purchase was made on Jan. 29, 1982.  The Suntan Copper 1960 Chevrolet Bel Air is likely the most definitive of the three vehicles, not because it is the most valuable or the most collectible of the three, but because it is of a class becoming more and more rare every day ― it is known in the world of collectors as a Survivor.  It has arrived at the ripe old age of 56 years without having any kind of major work.  All parts, systems, paint, engine, and the paint came with it out of the factory.  Curt said he has changed two light bulbs and put a new set of tires on it.

The first owner of the Chevy was Franklin resident, Dean Mashburn, who purchased it from John Smith Chevrolet in Atlanta, Ga.  Purchase price in 1960 was $3,000.  The car was owned by Mashburn until January 1982, when he traded it at a local Franklin car dealership.

Curt said he found out that Mashburn was going to trade the Chevy in on a new car.  On Jan. 29, 1982, when Mashburn drove the vehicle to Macon Motor Company to make the trade, Curt was right behind him to purchase it as soon as the deal was completed.  Curt said he wanted the vehicle because it was in such good shape and had low mileage (27,000 miles at that time), and he wasn’t about to let it get away from him.

The Bel Air (which incidentally is a six-cylinder, 235 horsepower, straight drive) has been in Curt and Nancy’s possession for almost 35 years and except for a little rust on the engine, still looks as if it was just driven out of the showroom.  The seats, the carpets, instrument panel and even the trunk sparkle with the new car pristine look.  Today the odometer is showing 37,900 miles.  It is truly an amazing and rare find.

Of these three automobiles, the 1967 Oldsmobile Cutlass Supreme 442 was actually their first purchase. The McCalls were the second owners of this vehicle, even though they bought it in 1967. The original owners bought the Olds 442 from Burrell Motor Company early in 1967. Shortly afterward they returned the car to the car lot.  Curt was there  to pick up this deal on the new car. Even though the McCalls were not the first owners, they have owned the car since 1967, 50 years next summer (2017).

The Olds was their driving car and now has 73,000 miles on the odometer. The interior of this vehicle is original, but it has been painted from the original black top/saffron (bright yellow) to its present color. The engine also had to be replaced when Curt blew the original engine one Sunday morning on the way to church.  He did admit to topping the car out at 120 mph at 7,000 rpm.

Their final purchase was a 1957 Corvette.  This iconic sports car is their pride and joy.  To say that it was a rebuild is an enormous understatement, since, at purchase, the car was totally disassembled. They bought the car from fellow car aficianado Willard Southard sometime during the summer of 1984.  At the time of purchase, the body was sitting on the frame. The engine, dual-fours 283 with a standard shift transmission, was included in the deal but was not mounted on the frame.

The summer of 1984 was the beginning of a labor of love for the McCalls. Not only was it a labor of love, but also a labor of persistence and determination to return this classic vehicle to its original beauty. They began the process by taking inventory and sorting all the parts they had purchased.  The parts were all put into crates, boxes and bags and labeled.

Then the real work began.  Since they desired the finished product to be in its original state, they spent the next 25-plus years in a grueling search for authentic Corvette parts to replace their car’s missing parts. Their diligence dictated, not only their attendance at many shows, but scores of trips around the southeast to purchase parts. They checked all the parts to be sure they had the right part numbers on them.  This was truly a real project car and they did not want to use after-market parts in the restoration.  Finally, in 2010, they had found all the missing parts ― from the original hubcaps to the NOS trunk emblem.

As the spring of 2010 blossomed, they began putting together all the pieces of this puzzle with a full frame-off restoration. During the next 14 months, they spared no effort and cut no corners in returning the vehicle to its original showroom beauty.  Curt said Jerry Hallenbeck from Murphy helped him through the entire process.  Then, a little over a year later they were able to unveil the Venetian Red Corvette that had consumed much of their lives for over a quarter century.

At this point of the conversation, Nancy pulled out a huge scrapbook.  It appeared to be about four inches thick. The scrapbook documented every step of the restoration project from start to finish.

Since the restoration, the rebuilt engine has only been driven 44 miles.  This is not a driving car and it is pushed onto a trailer to transport it to shows.  When asked if they used white cotton gloves to push their car, Nancy just smiled and said no, but that she did polish and buff the finish quite a lot.

The link between cancer and genetics: What you should know