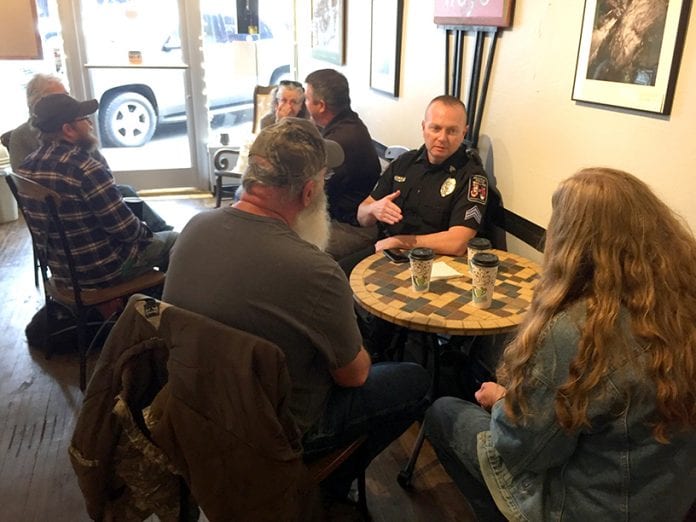 The 8 a.m. Coffee with a Cop event began with a half-dozen police officers and one relative – Capt. Steve Apel’s aunt, Elizabeth Gibson, 61 – exchanging stories about old-time TV shows and radio programs they once listened to. Gibson would listen to the old-time detective show “The Shadow” on the radio. Capt. Apel, stayed up late to watch “Starsky and Hutch,” and Chief David Adams’s Saturday favorites were “Love Boat” and “Fantasy Island.”

Chief Adams hosted the third annual “Coffee with a Cop” event with community members at Main Street Coffee Tuesday morning. Some questions rose out of curiosity; some out of concern. And still others drew on personal experience.

Southwestern Community College student, mother and recovered addict, Kelsie Elliott, 30, walked in for a tall iced coffee just before 9 a.m. seeking intel for an upcoming paper. The topic: CBD. All the officers nodded that the recent phenomenon of Cannabidiol oil sales in the area and the alleged medical uses of the non-THC containing cannabis derivative were worth a cross-café debate.

Officer Devin Holland had heard about how the elderly were using it to relieve arthritis. Chief Adams had heard that it has less than 1 percent of THC, the chemical found in marijuana.

“And it’s just as expensive to buy it,” said Gibson, comparing the price of oils and medical marijuana. All expressed concern that possessing the buds, which look and smell like marijuana, could lead to arrest.

“If you have a public safety job, you’re never going to be able to use it,” said Chief Adams, responding to a question about government security clearances.

Capt. Apel then discussed how vaping the oil could lead to marijuana use and then harder drugs. He told the story of his now 18-year-old son, who lost many friends as they drifted into unsavory crowds.

“They were all smoking dope,” he recalls his son telling him.

Gibson brought up how CBD is being used to treat epileptic seizures in children and is helping opioid addicts wean themselves off of their addiction.

“There definitely are some good benefits,” said Elliott. Speaking from personal experience, she added, “For people with an addiction, any kind of harm reduction would be welcome.”

Capt. Apel said when someone is in pain, they often seek all kinds of remedies.

“You get to a point where you would do just about anything,” he said, considering how it might help the arthritis he has in an ankle, if not for the concern that even a topical oil would test positive in a drug test.

The group discussed how the Cherokee tribe is rumored to be considering promoting CBD to reduce illegal drug use and associated deaths from drugs laced with dangerous chemicals.

Chief Adams swirled his head around to demonstrate his reaction to the scent of a cigarette when lit nearby him, even 20 years after he quit smoking.

Elliott is studying counseling psychology and would like to get involved helping at a “drug court,” where supervised sentencing alternatives address addicts’ needs from a public health approach.

“It’s good to get out and dabble with the people,” said Chief Adams. “See if there’s anything we can address through old-school networking.”

Discover Church teaming up with The Serving Spoon for free community...