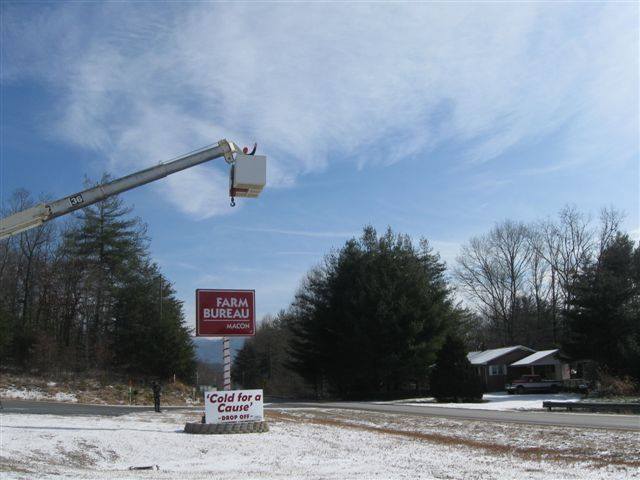 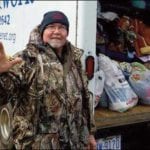 Patrick Jenkins, 50, says the mental preparation is even more challenging than the physical. In the weeks before Jenkins raises himself in a 2’ x 2’ cherry picker bucket for 48 hours in sometimes subzero temperatures to raise donations for the needy, he drinks a lot of orange juice. When it’s brisk outside, he leaves his jacket behind. When he normally might wear a sweatshirt, he’ll wear short sleeves. He starts to acclimate his body to cold temperatures. The mental preparation for “Cold for Cause” is under way.

Jenkins will enter the confined space in a donated J.R. Sanders Co. bucket truck and slowly rise 40 feet, up beyond the Farm Bureau Insurance sign on Highlands Road where he works, and into the Macon County skies at 12 noon on Friday, Jan. 11, and remain elevated —with a few bathroom breaks—until 12 noon on Sunday, Jan. 13. From high above, he will wave, smile and oversee the donations of an estimated 4,000 coats and blankets each year, and about 5,000 pounds of canned foods, in addition to personal hygiene products that will all go to Macon County CareNet for distribution to local needy families.

In nine years, Jenkins has withstood sub-zero temperatures, six inches of snow, lightning and rain. He has never been hospitalized, and he hasn’t missed work on the Monday after he exits the box. But in February 2015, within a couple of weeks of the event and just three months after the stressful passing of his father, he suffered a heart attack. His cardiologist gave him the green light this year as long as he takes up with him his daily aspirin, 80 mg Atorvastatin, 25 mg Metoprolol and goes easy on the Mountain Dew.

“I mentally have to prepare myself prior for the 48 hours,” said Jenkins. “You have to pace yourself.”

Jenkins spends all day smiling and waving to supporters, many of whom have set aside donations throughout the year to come out to see him.

“I would say I could handle the temperatures better than I can handle the mental challenge of being stuck in that one place for that amount of time,” he said. The professional insurance agent is dressed in long underwear and wool, fast drying, moisture wicking clothing that has been donated by local outfitters Outdoor 76 and Three Eagles Outfitters.

When the sun goes down and the temperature begins to drop, that’s when Jenkins starts to slow down his activity and body temperature to get through the night. The bucket will be lowered even with the Farm Bureau Sign at about 15 feet so that he can reach an extension ladder in case of an emergency. Bright lights will shine on his bucket and “Cold for the Cause” sign for passersby to see. And honk at until about 3 a.m.

When it rains, the drops will pound against the plywood above him and echo loudly in his box. Jenkins does nothing more than drift in and out of sleep those two nights, his 6’1” frame lying on a 6-foot piece of plywood, 15 inches wide — hip to hip — bordered with cold metal poles on each end.

“It’s pretty intense when your body slows down throughout the night to withstand those cold temperatures,” said Jenkins, who likened the experience to the chill one gets when you step into a newly framed out house in the winter.

How it came about

Ten years ago, Jenkins got to brainstorming.

He thought, “I need to come up with some idea, some way to give back to the community.”

He got to talking to Joe Sanders, owner of J.R. Sanders Co. equipment rental, and together the two spawned the idea of withstanding the elements to raise awareness and donations for those who might be cold this winter.

The first year, wind chills brought temperatures down to 9 below, Franklin Police officers and Macon County Sheriff’s deputies rapped on his box every few hours to make sure he was OK. By morning, an inch of ice was encrusted around his box from the condensation of his breathing, and the water pipes at his family’s home froze.

“Of course, I was kind of stuck, I couldn’t do anything about it,” Jenkins recalls when he got the phone call from his wife that Saturday morning. He added, with a laugh: “So, I had to do some planning and phone calls from up in the box to get that taken care of.”

Nine years later, several hundred community members follow Jenkins’ Cold for a Cause Facebook page and write him messages of support throughout his 48 hours in the box.

“I personally try to respond to every single comment and thank every single person,” he said. “That’s what keeps me pumped and motivated.”

“Every year, about two days before Thanksgiving, Joe’s phone rings,” Jenkins said of his annual phone call to Joe Sanders.

“He always answers, ‘I’ve been waiting for your call,’” Jenkins adds. On that call, the two discuss the day in January for Cold for a Cause. “That way whatever comes about weather-wise is the luck of the draw.”

Community members tend to believe Jenkins selects the coldest weekend of the winter.

“It’s a great cause. He’s very civic minded – a good fellow,” said Franklin Police Chief David Adams. “Our officers go by and check on him, make sure he’s okay.”

Since the beginning, Jenkins has had a personal goal of doing the event for ten years, so he could say he was able to do it for a decade.

“Last year was pretty tough, but I have to end on the 10th year,” he said, explaining how he views the event as an 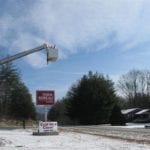 avenue for the community to give.

“What it really does is create a hum of neighbors helping neighbors because you know it’s going to help other families right here,” he said.

Reflecting on the donations, supporters and the movement he created, Jenkins underscores it’s not about self-promotion.

“It’s not my event, it’s the people of Macon County’s event,” he said. “If it wasn’t for them taking the time to donate, I would just be a guy sitting in a box.”

Stay-at-Home orders prompting some to try hand at gardening