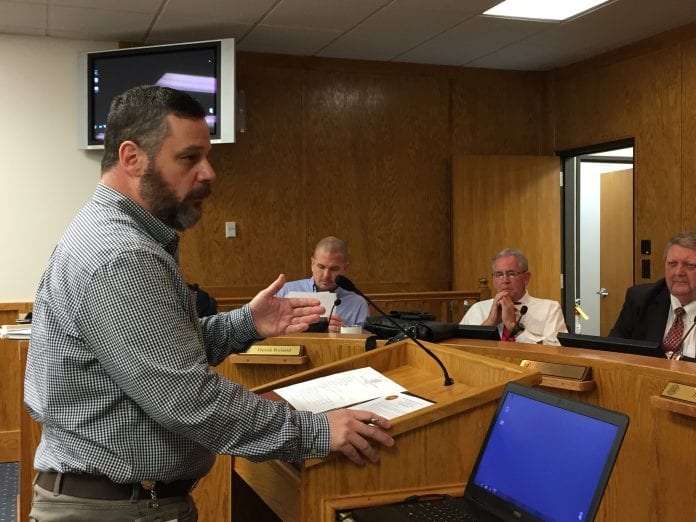 The $56,000 in county funds match a $66,667 grant from the North Carolina Department of Public Instruction, won through a partnership between MCSO and the School Board. Commissioners were required Tuesday to approve a $30,870 increase to previously budgeted funds.

“An SRO does far more than provide security at schools,” Sheriff Robert Holland told commissioners in defense of the funding, describing invaluable student and faculty counseling that takes place. MCSO tallied more than 4,000 such “contacts” between officers and students or faculty in the past year.

MCSO had temporarily been drawing an officer from the county jail to cover South Macon Elementary until the grant could be approved. The two new SROs bring the total number of officers permanently protecting schools to nine and provide complete coverage of all schools in the county, including two SROs at Franklin High School. Holland said the grant is renewable.

Department of Social Services director Patrick Betancourt briefed commissioners on how public services might be affected in the event of a prolonged federal government shutdown, given that North Carolina statutes require that the county continue to provide adult and child protective services with or without federal reimbursement.

“I don’t anticipate an adverse ability to provide services provided this shutdown ends relatively soon,” Betancourt said, adding that DSS was following a crisis management plan prepared after the prolonged government shutdown of 2013.

“There will be no impact until March or April,” he told commissioners, based on already federally reimbursed programs. “Fingers crossed this shutdown ends sooner than later.”

Asked Wednesday morning if Medicaid, SNAP (food stamps), or childcare subsidies had been adversely affected at this point, Betancourt said, “All programs are running normally.”

County auditors Martin Starnes & Associates presented the fiscal year 2018 audit, describing a “substantial increase this year” of $2.5 million in revenue over expenditures compared to the year before, according to presenter Kari Dunlap. County revenue in the fiscal year ending June 30, 2018 was $28.7 million, based primarily on taxes (56 percent), intergovernmental revenue (17 percent) and sales tax (16 percent).

Local sales tax saw a 5.7 percent increase, equal to $429,000, while the amount spent on public services, principally public safety, was also up 5.7 percent or $730,000 largely due to EMS funds directed in response to the wildfires and new vehicle purchases by MCSO. Education spending was up 1.8 percent, or $156,000 for a total of just under $9 million.

Board members were also delivered the first 101-page draft copy of the Macon County Comprehensive Plan for review and approval. The plan, which is revised every 10 years, covers all aspects of life in the county, and is chock-full of statistics, goals and assessments by county experts covering everything from water quality to education and jailhouse needs looking into the future.