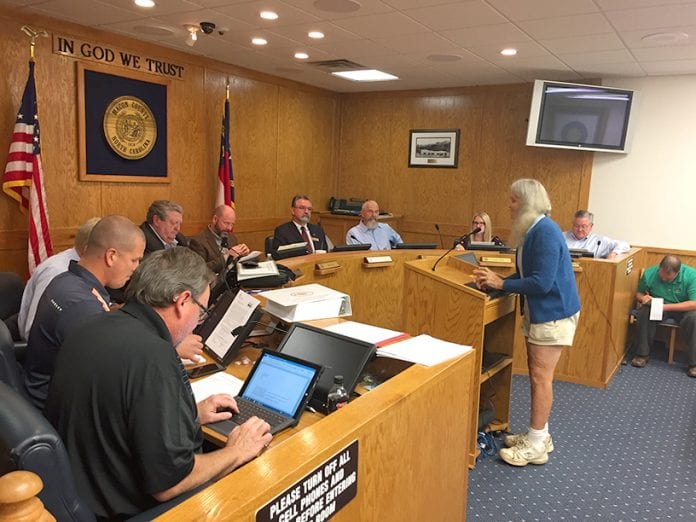 The Macon County Board of Commissioners passed several motions Tuesday affecting transportation, public health, posttraumatic stress disorder (PTSD) awareness, and the purchase of vehicles for the Sheriff’s Department from a Virginia dealer. Citizens attended to voice concerns over a series of road name changes that were adopted and called for revitalization of Franklin’s Greenway.

Macon County Community Transportation Program Transit Director Kim Angel made a telephone pitch for fiscal year 2020 operating funds totaling $84,700, which would include replacement of a propane conversion kit on a 22-foot light transit vehicle, and replacement of two personal computers, which will be six years old by the time funds are disbursed. The transportation program’s operating funds total $165,000, for which approximately $65,000 are made available through state funds to cover drivers’ salaries, vehicle maintenance, gas and other operating expenses. Angel explained that the total costs for all projects is $445,000, of which the local share is $120,000. The board approved the measure unanimously.

Carmine Rocco was named interim Health Director for Macon County, and invited to present his credentials to the board, following the retirement of Jim Bruckner after 11 years. Rocco described service with Guilford, Warren, Chatham and Haywood counties over more than 25 years as a North Carolina resident. He praised Macon County’s “excellent level of services,” especially in the area of mental health. Rocco will serve in the capacity until a permanent replacement is found.

The Vietnam Veterans of America local chapter no. 994, which claimed to be the largest in the state, proposed that the board recognize October 27 as PTSD Awareness Day. The proposal, which also received the support of local chapters of the Veterans of Foreign Wars no. 7339 and American Legion no. 108, recognizes that veterans commit suicide at the rate of 20 per day as a result of various traumas suffered in the line of duty. The VVA proposal, which was approved unanimously, will promote PTSD awareness, reduce associated stigma, and promote treatment. A public event with the reading of poetry written by veterans will be held at the Franklin Performing Arts Center on October 27.

Heavy debate centered on a proposal to select the lowest bidder for a September Sheriff’s Department request for bids to purchase three new patrol vehicles after bids revealed that a Dodge dealership in Virginia appeared to be the winner. Commissioner Gary Shields questioned why bids were not received from Franklin’s three local dealerships, including Smoky Mountain Chrysler Dodge Jeep RAM. The board confirmed that proper protocols were followed for public notices of the request for proposals, including an advertisement in the Franklin Press. County commissioners have a statutory requirement to choose the lowest responsible bid, and not show local preference.

Commissioner Karl Gillespie said a manager at the local Dodge dealership was unaware of the request for proposals, and he ultimately voted against the motion. Gillespie stated that of 26 county vehicle purchases in 2017, only three were purchased from local dealers, while in 2018, only one of four vehicle would be purchased. Faced with a decision to reject all bids, the remaining four commissioners approved the motion after agreement to take additional steps to notify each local dealership when future public notices are published.

“We’ll see on November 7 which commissioners have been naughty, and which have been nice,” said Franklin resident Narelle Kirkland, during the public comment period, referring to election day, when two commissioners are up for reelection. Kirkland said she was making her third visit to the commissioners meeting since September 2017, when she first proposed investment for revitalization of the Little Tennessee River Greenway in Franklin. She said the three sections of gravel paths are “very dangerous for seniors,” and damage remains from 2004’s Hurricane Ivan.

Macon County Fair cancelled for the first time in its history