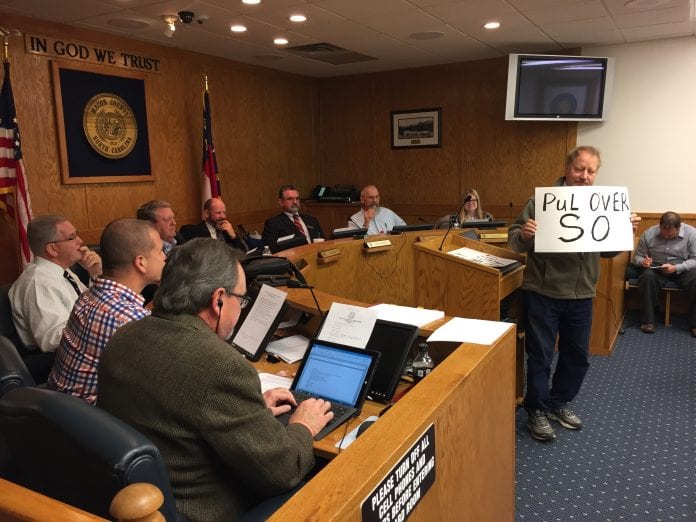 The Macon County Board of Commissioners returned from a closed session discussion with legal counsel to vote unanimously in favor of a resolution to grant former Macon County Health Department employee Lisa Marling $4,331 as a full settlement of claims in a suit of unjust firing and possible discrimination.

Marling’s LinkedIn profile indicates that she was a processing assistant for the Macon County Health Department for 18 years before her departure. No further information about the case was made public.

Troops of the 210th North Carolina National Guard Military Police Company who returned from Guantánamo Bay, Cuba Oct. 6 will be supported with a $2,500 board contribution toward a welcome home dinner with their families planned for Feb. 9 and organized by the Veterans Council of Western North Carolina. About half the company of an estimated 150 troops are from Western North Carolina and were responsible for supporting detainee management at the naval base where many suspected terrorists have been held since 9/11.

Slow drivers on Highlands Road were the topic that got the most chuckles at the meeting when Franklin resident– and frequent Highlands Road commuter– Jeff Pritz brought in a series of homemade posters with phonetically spelled messages in the tradition of a Burma-Shave advertisement.

Messages like “Go-In Slow,” “Pull Over SO,” and “They Kin-Git By” were designed by the presenter with a black marker on white poster board and displayed for the board members and less than half dozen attendees, not counting media. Pritz proudly described how slow drivers would be comically induced to understand that pullouts were meant for their use, and to allow more experienced, 35 mile-per-hour drivers to pass them on the winding mountain road.

The board pointed out that they do not sign the county’s roads but agreed to bring up the issue at the December Rural Planning Organization meeting with the NC Department of Transportation.