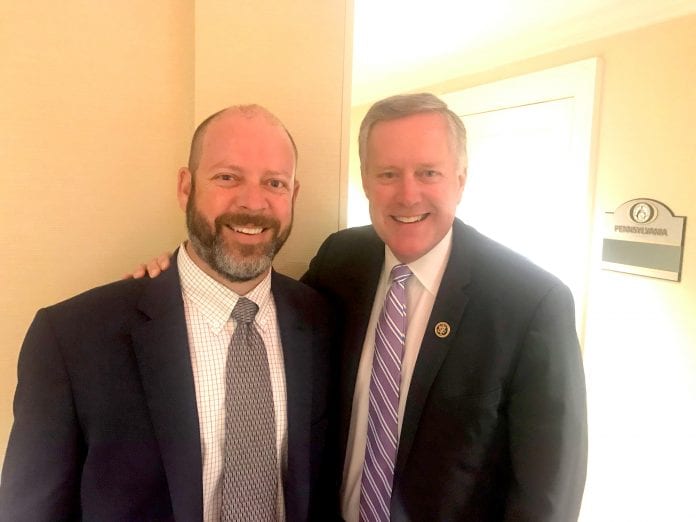 “Most importantly, I feel this conference gives us an opportunity to speak face to face with our senators and congressmen about federal priorities which directly impact Macon County,” said Roland. “The federal government has a tremendous impact on our local budget. For example, in 2017 Macon County received approximately $7,216,516 in federal funding which represented almost 15 percent of the operating budget. These monies are key not only to Macon County operations but to the operations of entities such as the school system as well (PILT, SRS). The opportunity to relay the importance of this funding to our legislators in a one-on-one setting is extremely important.  Additionally, it allows our legislators to give us a “heads up” on forthcoming legislation or legislative changes that could impact these federal funding levels.  Receiving this “heads up” in advance gives us a chance to plan for any changes well in advance of budget preparation.”

Just as important as the federal funding contained within the county’s operating budget, are the federal funds received by agencies via direct benefit payments which are not included in the local operating budget. In 2017, approximately $32,136,616 was received in direct benefit payments for medical assistance programs, WIC, TANF, adoption, foster care and NC Health Choice.  Funding for these programs while not reflected in the local operating budget, is heavily relied upon by county agencies and has a substantial impact on the level of service these agencies are able to provide for Macon County citizens.

“I feel the opportunity to have a face-to-face discussion with our legislators on real issues affecting Macon County tremendously benefits the citizens of Macon County,” said Roland.

To generate $7,216,516 locally, the amount of the local budget derived from federal funds, would require a tax increase of approximately 9.19 cents per $100 of value on the local tax rate. Thus, the continuation of this funding plays a key role in Macon County’s ability to provide the highest level of public service at the third lowest tax rate in the state of North Carolina. In the absence of the $32 million received in direct federal benefit payments, a local tax increase of approximately 40 cents per $100 of assessed value would be needed for local agencies to continue  providing services at the current service level.

“We were able to discuss in-depth, the issue of broadband expansion and urge our legislators to strongly consider providing digital infrastructure funding along with revised legislation that clarifies current FCC definitions for speed thresholds and unserved areas, all of which would assist us locally in our broadband expansion efforts,” said Roland. “We encouraged our legislators to support the Market Place Fairness Act (MFA) which would allow for sales tax generated from remote sales (such as Amazon) to be retained by the county in which the sale took place.  In the coming fiscal year as remote sales continue to rise, North Carolina and its counties could lose more than $500 million annually through untaxed remote sales.  It is important to note that the collection of remote sales taxes is neither a new tax nor a tax increase-  these revenues are already due and payable by law.   Senator Richard Burr from North Carolina currently sits on the Senate Finance Committee who continues to discuss the MFA.”

“We encouraged our legislators to support programs such as the Stepping-Up initiative which would reduce the number of people with mental illness in county jails through the provision of appropriate treatment and services,” said Roland. “This program which is a primary legislative goal of the NCACC was born from Commissioner Beale’s Mental Health Initiative which he started during his tenure as NCACC President.  Programs such as this take on a whole new meaning when we are able to sit at the table with our legislators and show them the actual Macon County budget numbers for line items such as out of county housing costs in the detention center, which have risen by almost 600 percent since 2012 because our jail remains over-capacity.”

Beale noted that addressing the drug epidemic was imperative to working toward a solution.

“The participation that I had in several of the breakout sessions which included an update on the opioid crisis and how other states and counties are dealing with this epidemic was invaluable,” said Beale. “Another session we were involved in was the impacts of adverse childhood experiences and childhood poverty in rural counties and how this impacts that child as it gets older. And of course there is nothing like meeting with your elected legislators face to face and discussing issues that affect Macon County.”

Tate noted that the opportunity to have informal meetings with state leaders was invaluable.

“We were attending the legislative breakfast on Tuesday morning which was comprised of all of the commissioners attending from N.C. along with the entire N.C. Delegation (all 13 U.S. House members and both U.S. Senators),” said Tate. “When it was Rep. Mark Meadows’ time to address the crowd, he used his timeframe to point out just how important that it is for us as commissioners to make the trip to DC to meet with our congressmen and senators and have the ‘conversation’ about our issues.  He then recognized Derek, myself and Ronnie by name and he portrayed the long standing relationship that he has with each of us and just how productive that our time together had been.  For Rep. Meadows to personally point out our efforts to all of our peers was a great feeling and one that I will never forget.  Before our trip, there were several outstanding questions and for Rep. Meadows to shake my hand, look me in the eye and reassure me that the funding for PILT as well as our other issues would be at the top of his list, was a testament to our efforts and proved just how important that Macon County is to him.”

“The gentlemen we spoke with are the decision makers and this conference provides us with the opportunity to ‘plead the case’ if you will, for Macon County, as to why it is so important that certain decisions are made,” said Roland.  “Sure we could put all these things in an email and send it to their offices where it would go to a legislative assistant to be prioritized along with the thousands of other emails they receive daily.  I personally feel however,  issues which directly impact the lives of every single citizen in Macon County are more effectively discussed face to face where you can look a man in the eye and shake his hand when the conversation is finished.  The annual NaCo conference affords us this ‘face to face’ opportunity and in my opinion as elected and appointed officials, we owe it to the Macon County citizens to have their voices are heard directly.”