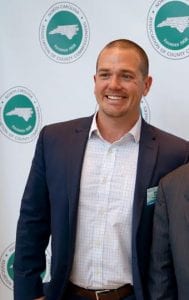 After serving as manager of Macon County for three years, county leaders voted to reward Derek Roland with a one-time five percent salary bonus and plan to revisit his salary in July.

“When it comes to county government, as you know you are at the top of the pyramid and to be successful you have to have two very strong qualities, both which I think you possess,” said Macon County Commissioner Vice-Chair Jim Tate who made the recommendation for the bonus and raise. “First you have to have respect for your fellow man and employees, and secondly you have the ultimate responsibility to look after this county and its employees.”

Roland currently makes $100,000, which is what he was hired at in 2013 when he replaced longtime manager Jack Horton. Roland came to Macon County from a position with the town of Franklin where he was serving as the town planner. Prior to his role with the town, Roland worked as the Macon County planner.

Roland’s current contract with Macon County calls for an annual review of his salary and discussion on the possibility of a raise, something that has not been done since he was hired. The one-time five percent bonus amounts to $5,490 and was taken out of the county’s contingency budget.

“Anything we have asked you to do, and I think no one on this board can deny this fact, you not only bring us back an answer, but you always exceed our expectations on what we want to have, what we want to see, and where we want to see this county go,” saidTate.

Tate highlighted Roland’s achievements over the past three years which includes the planning and construction of the Parker Meadows Recreation Complex, a complete overhaul of the county employee insurance plan, saving the county over a million dollars during the mandatory tax re-valuation process, and working to spearhead a county employee compensation review to bring county salaries up to a competitive rate.

In addition to the one-time bonus, Tate called for Roland’s salary to be reviewed over the next month and a possible raise be brought for discussion in July. Tate noted that compared to neighboring county and towns, Roland’s salary isn’t competitive. When Roland conducted the regional county employee salary survey, he did not include his own salary.

According to Tate, the average salary for county managers in counties with similar populations to Macon County is $120,000 with Transylvania County having the lowest county manager salary at $100,000, to Beaufort County with a salary of $153,000.

In Macon County, the town of Highlands Manager Bob Frye earns $112,000 per year and the town pays for his insurance as they do for all town employees. Frye has served as the manager of Highlands for four and a half years and has served as an assistant manager in N.C. for the last 20 years. Frye is responsible of overseeing an annual budget of $14.5 million, 65 full-time employees and 25 seasonal employees.

Woodard has been employed with the Town of Franklin since 2010 and served as Town Manager since July 7, 2014. Woodard is responsible for an annual budget that totals $8,858,437 this year and oversees 56 employees.

In Jackson County, Sylva Town Manager Paige Dowling makes $67,615 per year and has served as manager for four years. Dowling is responsible for an annual budget of $3,599,868 and oversees 27 employees.

Roland is responsible for managing the county’s 650 employees and overseeing a $46 million budget.

Commissioners will continue the discussion of the possibility of a raise for Roland in July. 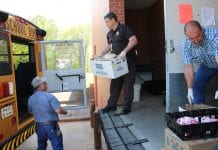